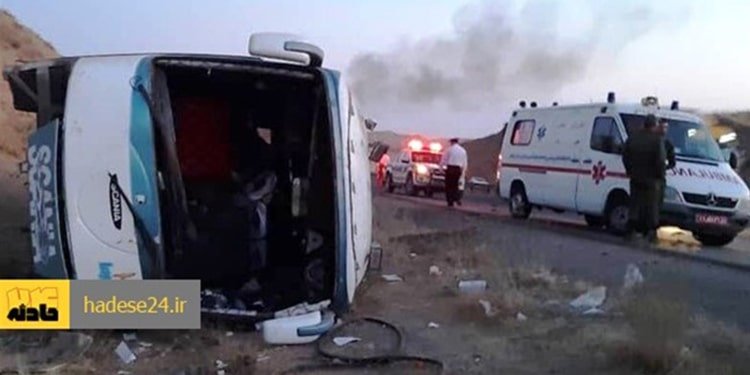 Ten school girls got injured when their bus crashed into a mountain. The accident took place near Iranshahr in Sistan and Baluchestan Province.

Mojtaba Khaledi, the spokesman for the National Emergency Organization, said: “The accident took place at 7 a.m. on Wednesday, October 30, 2019, on Nikshahr-Iranshahr road near Upper Shegim village. Unfortunately, the minibus carrying school girls turned over after crashing into a mountain.”

Khaledi said all the students riding the minibus, including the ten school girls, were transferred to the nearest medical centers. (The state-run ISNA news agency – October 30, 2019)

On Sunday, October 20, 2019, three 13-year-old school girls and one 6-year-old boy were injured in Shiraz when two cars collided.

On the same day, 11 school girls 13 to 16 years of age were injured and taken to hospital after three school transportation cars collided in Khamir Port in Hormozgan Province. (The state-run ISNA news agency – October 20, 2019)

In another tragic accident in Sistan and Baluchestan Province, a school girl lost her life.

The director of the Education Department in Zahak stated: “The father of one of the students was driving his daughter and three other students to school when the car veered off the road and overturned. The driver’s daughter, Yeganeh Bolagh, a ninth grader, died instantly. The three other school girls were Setareh Zahedi, Mobina Bolagh, and Yasna Mir, who were taken to the Hospital of Zahak due to injury and broken bones.” (The official IRNA news agency – October 20, 2019) Lack of safe and standard school transportation and unsafe roads cause tragic accidents, leading to the deaths of many innocent students every year.

Seeking a pluralist republic based on gender equality in Iran