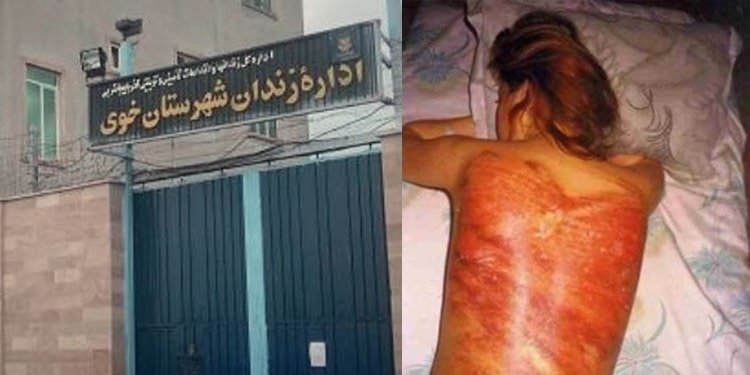 A sentence of 70 lashes was carried out on Salbi Marandi, an 80-year-old woman from Khoy, and she was taken to the women’s ward of Khoy Prison to serve eight months in prison while she had lost her motor ability.

Thursday, November 28, 2019, an 80-year-old woman by the name of Salbi Marandi was summoned to the Office of the Implementation of Verdicts in the city of Khoy. First, she was flogged 70 lashes of the whip and then, she was transferred to the women’s ward of Khoy Prison.

After the flogging sentence, the old woman was in horrible physical condition not able to move. Then she was taken to the women’s ward of the Prison of Khoy to serve eight months in prison.

Salbi Marandi had a son, Behrouz Zeinal-Nejad. He was an ordinary prisoner who sewed his lips and went on hunger strike last January in protest to the authorities’ refusal to extend his furlough. On the fifth day of his hunger strike, he died in suspicious circumstances.

Prison authorities said he had committed suicide. The family of this prisoner, including his mother and sister, rejected this claim after seeing his corpse. They went to the prison’s office and objected to the authorities. They were mistreated by the prison warden and the judge, and they got engaged in a quarrel.

The prison warden and the judge filed a complaint against this family and the Public Court of Khoy sentenced Salbi Marandi and Atefeh Zeinal-Nejad to 70 lashes and 8 months in prison, each. Atefeh Zeinal-Nejad has so far evaded reporting in to the court for her sentence to be implemented.