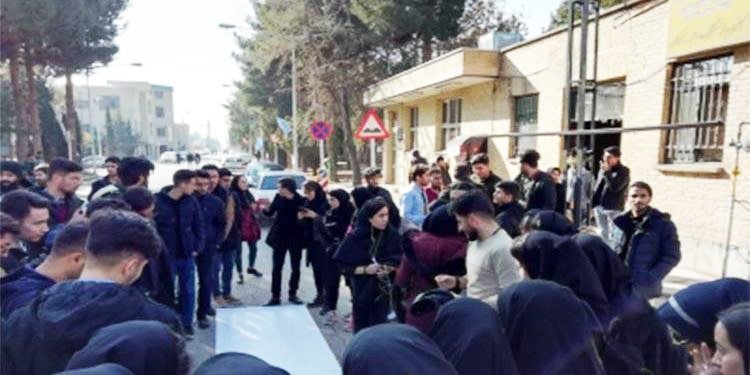 Four acts of protests were held in different parts of Iran in 48 hours with active participation of women. Iranian students also have been continuing their protests.

Iranian students of Beheshti University of Tehran held a protest gathering at 8 p.m. on December 16, 2019, outside their dormitory located in Velenjak Blvd. The students set up fire in the middle of Velenjak Blvd. and blocked the traffic. This act of protest continued until early morning of Tuesday, December 17.

Students of the Industrial University of Shahroud also held a protest gathering on campus on Monday, December 16, 2019, against measures of the university’s intelligence department disturbing students particularly the female students under the pretext of enforcing the compulsory veil.

Earlier, Iranian students of the University of Shahr-e Kord held a protest gathering on the Student Day against the Guardian Council, the procedure of endorsing and rejecting the candidates, security measures against university students, and the government’s corruption.

The defrauded clients of the IRGC-backed Caspian Financial Institute held a gathering on Monday, December 16, 2019, outside the mullahs’ parliament, demanding their deposits. Also a group of residents of the city of Lar, in Fars Province, held a protest gathering on Sunday, December 15, 2019, outside the Department of the Housing Foundation of the City of Lar. Based on the promises given by the Housing Foundation, they were supposed to build a residential complex by March 2018 and deliver the houses they had purchased. After four years, however, no government institute accepts responsibility for this. Eighty-eight families were supposed to receive housings after the completion of this project.

Parvin Mohammadi among dangerous inmates in Kachouii Prison of Karaj