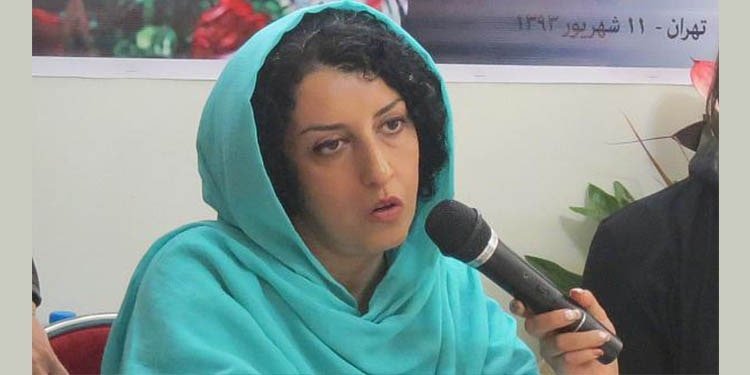 Political prisoner Nargess Mohammadi was sent to exile to the Prison of Zanjan. From Zanjan Prison, she wrote, “I would not give up crying out against oppression.”

Her husband, Taqi Rahmani, tweeted that political prisoner Nargess Mohammadi had been transferred from Evin Prison to exile in Zanjan Prison in the morning of Wednesday, December 25, 2019, without a verdict, by force and physical violence.

The Warden of Evin Prison had smashed her several times to the wall and in the course of the wrangling with guards, she was injured and her arms started bleeding. Prison authorities had earlier deprived this prisoner from visits and telephone calls due to her sit-in protest.

Political prisoner Nargess Mohammadi had earlier written a letter denouncing the regime’s use of force against protesters in Iran and calling on everyone to take a stand for the prosecution of those responsible.

In her letter on December 1, 2019, she pointed to the situation of two of those arrested during the protests in November 2019. She wrote about a wounded young protester who had been taken to Evin Prison. “His appearance showed that bleeding, infection and swelling of his feet had overwhelmed him and that was why the interrogators of Ward 209 of Evin had brought him from solitary cell to the clinic. He was very young from Islamshahr. I told him to insist on being treated for his leg otherwise it would be amputated. He said, ‘I’m going to be executed. What’s the difference with leg or without it? They have not even put Betadine on my wound since the day they arrested me.”

Political prisoner Nargess Mohammadi also wrote about a young woman only 20 years old. She said, “The interrogator had caught her hair and dragged her around. Insulting her with very vile language, such that she couldn’t repeat his words. Then he had opened his belt and banged it on the chair and table to frighten the young woman and have her say whatever they wanted in front of the camera. Not once, but several times.”