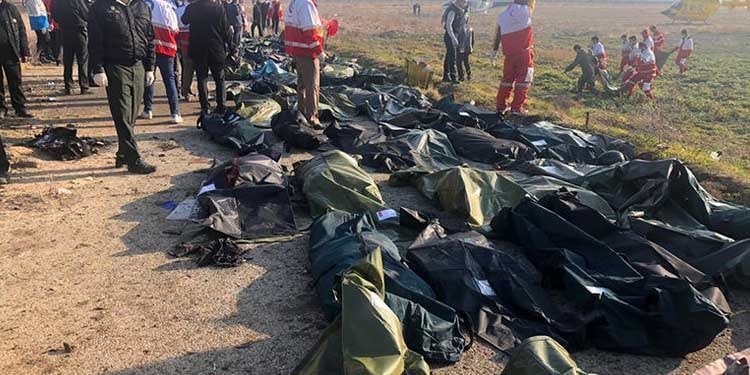 As a result of the regime’s defensive missile fire attack, a Ukrainian plane crash near Tehran has left 176 innocent people dead, including 81 women and 15 children. 147 of these passengers were Iranian.

The main victims were Iranian students from various universities, including Sharif University, who were using the transit line to continue their studies.

Mrs. Maryam Rajavi, the President-elect of the National Council of Resistance of Iran (NCRI), declared Friday a day of general mourning for the loss of innocent passengers killed in the clerical regime’s attack on the Ukrainian plane in Iran, saying, “Khamenei has free reins in shooting at the people of Iran in the air and on the ground and takes revenge on the Iranian people.”

Pentagon officials announced, “The Ukrainian passenger aircraft that crashed just outside the Iranian capital of Tehran was struck by an anti-aircraft missile system.

US officials are confident that the Iranian regime has shot down a Ukrainian plane in the hours after Iran’s missile attack on US targets,” the CBS television website said.

The head of Tehran’s civil aviation organization declared that it will not give the black box of the crashed Ukrainian airliner to Boeing, the airplane’s manufacturer.

OPSGROUP has stated, “We would recommend the starting assumption to be that this was a shootdown event, similar to MH17 – until there is clear evidence to the contrary.” Images shown by OPSGROUP, “show obvious projectile holes in the fuselage and a wing section.”

Ukrainian International Airlines has also denied any technical defects in the Boeing 737-800 aircraft which was built in 2016 and delivered directly to the airline from the manufacturer. The last scheduled maintenance of the aircraft took place on January 6, 2020. A spokesman for the UIA company said, “We guarantee the safety of the aircraft and the competence of the pilot and crew.”

An independent aviation expert, Vadim Lukashevich said, “In any air accident, there are usually three factors: human, weather and mechanical. Here you can add a fourth – the political. We know that a few hours before the crash, Iran sent missiles over to US targets in Iraq. They were expecting a response by air. We know they were on full alert.”