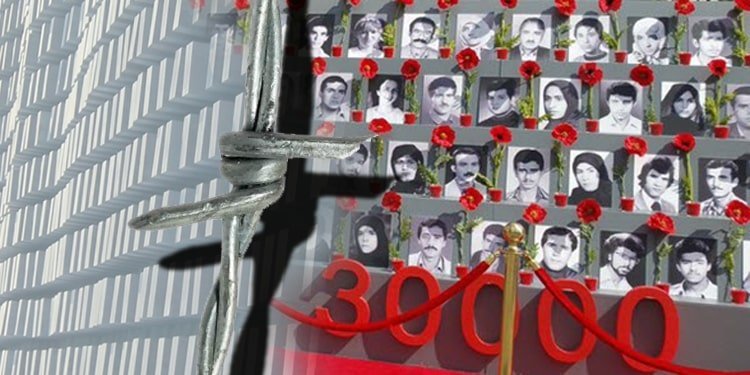 On January 27, International Holocaust Remembrance Day commemorates the genocide that resulted in the deaths of 6 million Jews who had been gathered from all over Europe and cremated in gas chambers in the German and Polish extermination camps.

The Holocaust, which means destruction on a mass scale by fire, is known as one of the most outrageous crimes ever committed in history. Part of the Holocaust took place at Auschwitz, a concentration camp in Poland operated by Nazi Germany.

The Greatest Crime Against Humanity After World War II

In the greatest crime of the century after World War II, at least 30,000 political prisoners were massacred in the mullahs’ medieval prisons in Iran. As part of this massacre, women and men were found guilty by a “Death Committee” and subsequently hanged – simply for defying Khomeini and his doctrine. The massacre began shortly after Khomeini issued a fatwa (religious order), which ultimately led to the execution of 30,000 prisoners.

This chapter is among the darkest and most outrageous in the Iranian people’s history and represents a state-sponsored crime. The Death Committees were a mere cover-up for the extrajudicial killing of thousands of victims, who had no legal recourse. Indeed these victims had already been tried and sentenced to prison. They were already serving their sentences and some had completed their time in prison, or had been arbitrarily re-arrested.

They were found guilty in summary trials by the Death Committee and murdered without receiving any legal assistance from the Khomeini regime or the Ministry of Justice. The trial merely represented the regime’s attempt to conceal their heinous crime.

Mostafa Pourmohammadi, a member of the Death Committee in the 1988 massacre, was the representative of the Intelligence Ministry in Evin Prison at the time. On July 29, 2019, he boasted, “We are proud of killing these people.”

Murdering and Raping Schoolgirls and Children

There were 477 children and adolescents among the victims of the 1988 massacre, including two 11-year-olds and three 12-year-olds.

Raping women and girls was just one of many crimes committed in Khomeini’s prisons in 1988.

Nasrin Shoja’i was 13 years old when she was arrested for being a supporter of the People’s Mojahedin of Iran (PMOI). She was raped before being executed at the age of 19.

On August 15, 1988, one of the members of the death committee told Ayatollah Hossein Ali Montazeri: “We were considerate about those who were under the age of 18, while most of the prisoners hanged were (high school) students. This means that they were between 15 and 17 years old at the time of arrest.”

These were all teenagers who had dreams and ambitions. But they were arrested, interrogated, and hanged after 7 years of torture. Among the victims of the 1988 massacre were young teenagers such as Laila Hajian, Soheila Hamidi, Roya Khosravi, Mehri Derakhshan-nia, Soheila Shams, Sudabeh Rezazadeh, Mahtab Firoozi, Farahnaz Moslehi, and Parvin Bagheri.

Political prisoner Tayyebeh Khosro Abadi, who suffered from congenital paralysis and who had completed her sentence, was among the victims of the massacre.

Today, 31 years after the massacre, the world still does not know the extent of this crime. Meanwhile, the Iranian regime continues to kill civilians on a massive scale.

Mrs. Maria Candida Almeida, former Deputy Attorney General and Attorney General of Portugal, responded to Mrs. Maryam Rajavi’s call for investigation into the 1988 massacre, as well as the prosecution of its masterminds and perpetrators:

“As a legal expert and someone who has worked at the highest levels of the justice system in my country, I am very shocked and angry at the inaction and silence of the international community over the inhumane execution of thousands of men and women, including children.”

Mrs. Ingrid Betancourt, a former presidential candidate and hostage in Colombia, mentioned in her speech regarding supporting the Call for Justice Movement for victims of the 1988 Massacre:

The Massacres Continue in Iran

In Iran today, the perpetrators of crimes against humanity are at the highest levels of government and continue to commit crimes.

Ibrahim Raisi, the regime’s Deputy Prosecutor General at the time, and one of the key members of the Death Committee in the 1988 massacre, is now the Chief Justice heading the regime’s Judiciary.

Alireza Avaii, the current Minister of Justice of the mullahs’ regime, was also a member of the Death Committee in Dezful and Ahvaz prisons during the massacre of political prisoners in the summer of 1988.

Mostafa Pourmohammadi, the former Minister of Justice who currently serves as an advisor to the Iranian Judiciary, was a key member of the death committee in the 1988 massacre.

That these authorities have remained at the highest levels of office is simply a continuation of crimes against humanity.

In the November 2019 uprisings in Iran, the mullahs murdered more than 1,500 people – including 400 women – for protesting over the high price of gasoline. Mina Sheikhi was shot by IRGC forces at her home while she was standing on the balcony. Golnar Samsami was on her way home from work when she was shot by snipers; she died a few hours later at the hospital. Azar Mirzapour, a nurse and the mother of four, was shot on her way home. Nikta Esfandani, a 14-year-old girl, was shot in the neck by security forces on Tehran’s Sattar Khan Ave. The massacre of Iranian protesters in November 2019 is among the most appalling crimes of the 21st century.

The Iranian Resistance has continually called on the United Nations and the European Union to take immediate action. The NCRI has called on the international community to dispatch fact-finding missions to Iran to investigate this major crime against humanity, conduct prison visits, and pressure the regime to release prisoners.

And now, the latest state-sponsored crime is the IRGC’s missile attack against a Ukrainian passenger jet that killed 176 innocent civilians, including 81 women and 15 children.

This latest attack is further evidence that until the religious dictatorship is removed from power, its crimes will continue to be added to its criminal legacy.