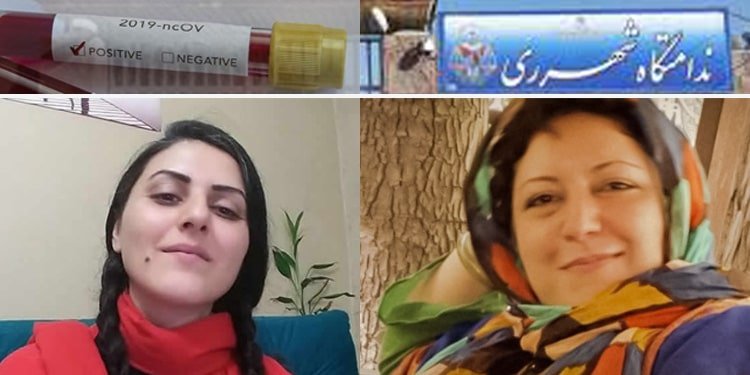 Golrokh Ibrahimi Iraee and Marjan Davari at risk of coronavirus

Two female political prisoners Golrokh Ibrahimi Iraee and Marjan Davari, who are incarcerated in Qarchak Prison in Varamin, are at risk of coronavirus infection.

According to reports from Qarachak Prison, where Golrokh Ibrahimi Iraee and Marjan Davari are being detained, their inmate who was suspected of having contracted the coronavirus tested positive, posing a threat to the lives of both political prisoners and their fellow inmates.

The families of political prisoners have repeatedly demanded prison authorities and the judiciary to grant leave to their children, but their demands have so far been turned down.

Hossein Daemi, the father of political prisoner Atena Daemi, also announced earlier that his daughter’s temporary leave had been rejected. He emphasized that whatever happens to his daughter, the Tehran judiciary and prosecutor, and the prosecutor overseeing the prisons are going to be directly responsible.

The Iranian Resistance has announced that as of Saturday evening, March 14, the number of people who have lost their lives in Iran due to Coronavirus exceeds 4,500 in 175 cities of all 31 provinces.

In other news, Zohreh Sarv was sentenced to 3 years in prison on the charge of “insulting the leader.” She was detained and transferred to the IRGC Detention Center in Tehran on December 24, 2019. She was transferred to Qarchak Prison of Varamin on January 11, 2020.

Also, two female prisoners, civil activists Parvin Advaii and Farideh Veisi, who are being held in Sanandaj Prison, have been on hunger strike for 6 days.

The two political prisoners have been on hunger strike since Monday, March 9, 2020, at the Sanandaj Correctional Center (Women’s Prison) in protest to their uncertain status and to the authorities’ refusal to release them temporarily.

Parvin Advaii is a civil rights activist from Marivan, active in the field of women and children’s rights. Her prison sentence was reduced to two years by the Appeals Court.