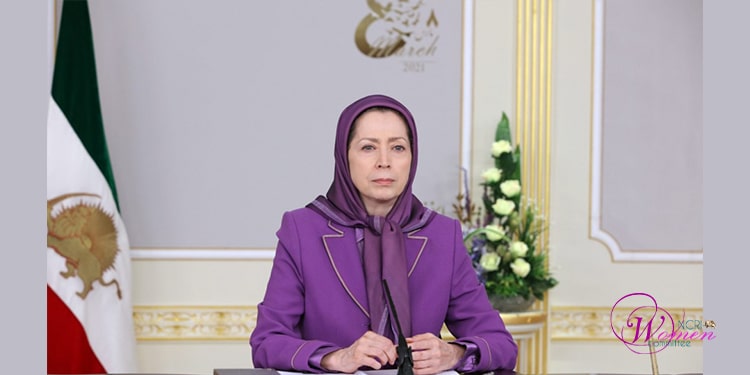 In her message on International Women’s Day, Mrs. Maryam Rajavi, President-elect of the National Council of Resistance of Iran, said: Women of Iran can and must win victory.

Mrs. Rajavi pointed out the simultaneity of International Women’s Day with the uprising in Baluchistan, and underlined the role of women in aiding the protests.

“Yes, the women of Iran lead the Iranian people’s uprising to sweep away the mullahs’ misogynistic regime from all over Iran,” Mrs. Rajavi said in her message.

Another part of Maryam Rajavi’s IWD2021 message, reads: “Today, Covid-19, poverty and suppression have given a bleak and dismal appearance to our cities and villages; but underneath this darkness, the Iranian women’s determination to achieve freedom and equality, and to change political and social dynamics has rekindled the flames of hope… Today, it is not the mullahs’ missile or nuclear programs or Khamenei’s Revolutionary Guard Corps, but the people of Iran and particularly the women of Iran who will change the equation in Iran.”

“So, this year, International Women’s Day delivers a commitment for Iranian women. The commitment is that they can and must break through the calamity of Coronavirus, repression and poverty, and win freedom and equality,” Mrs. Rajavi reiterated.

Why do the mullahs fear Iranian women?

And yet, in another part of Maryam Rajavi’s IWD2021 message, she addresses Iranian women’s present capacity and potential:

One can see this potential in the all-women Central Council of the PMOI which is leading a nationwide resistance against the mullahs’ ogre of suppression and misogyny.

They preserved and led the movement proud and steadfast, when it was besieged by two dictatorships of Khamenei and Maliki in camps Ashraf and Liberty. In this effort, they were accompanied by a generation of their brothers, emancipated men who have abandoned the ideology of gender-based perspectives and narcissist egotism. They sowed the seeds of protest in cities around the country and created a concrete sense of hope among the people of Iran for freedom.

There is also a long line of resistant and combatant women who are remaining steadfast in prisons across Iran. Although there is not much talk about them, they are among the most resistant fighters and they are proud of it.

All of us remember the image of that young woman who had raised her fist with the smoke of tear gas billowing in the background.

Khamenei’s IRGC commanders said in those days: Women were the main ringleaders who incited and started the protests.

The regime’s Minister of Interior said: In Tehran, each team of four, five or six people were being led by a woman.

In Tehran’s Sattari Highway, protests and chanting continued non-stop for seven hours. What was remarkable in this lengthy protest was the formation of a human chain of women who had blocked the highway towards south.

Many of the participants in the protests in Karaj were also women.

Yes, the force of rebellion of that blood-drenched and fiery uprising in November 2019 lurks in the heart of Iranian society and erupts like a storm or a roaring flood at every opportunity.

And again, it is the women of Iran who are standing in the eye of the storm in every upheaval and in every uprising.

Actually, this is why the mullahs are terrified of the force of women’s resistance.

They have deployed various kinds of weapons to contain this flourishing and progressive force, including inhuman discriminations, to suppression and constant control, to pushing millions of women towards poverty.

Call to rise up and spread the protests and uprisings

In Maryam Rajavi’s IWD2021 message, she enumerated some of the main problems Iranian women and society are grappling with today. Mrs. Rajavi also reviewed the rights women must enjoy, and then called on women of Iran to rise up and spread the uprising for the mullahs’ overthrow:

On International Women’s Day, I salute the struggle and resistance of my sisters and daughters in the Resistance Units.

And I call on all of you, my dear sisters, the dauntless and arisen women of Iran, to spread the protests and uprisings to overthrow the regime and achieve freedom and equality.

I am addressing all the women of Iran, teachers and nurses, college and high school students, peddlers, housewives, workers and farmers…

No force can stop the overthrow of the mullahs. The objective conditions and the circumstances for a revolution are in place. They must be accelerated and guided towards freedom with your enlightened and fighting force led by your vanguard sisters in the PMOI.

Iranian women have learned that instead of becoming passive and introverted in the face of misery, poverty, aggression and oppression, they must rise up. Each of the obstacles, restrictions and oppression that the regime imposes on you, is an opportunity that tests your willpower. You must rebel against all these obstacles.

Giving up and getting tired and disappointed will only embolden your enemy.

You have time and again seen that in confronting the regime, whenever you rise up and roar, the mullahs are compelled to step back and retreat.

Yes, you have learned from your vanguards, that generation of Mojahed and combatant women who have resisted and fought this misogynous regime for four decades.

This generation passed through torture chambers and execution fields; it stood fast in the face of missile attacks and the enemy’s onslaughts against Ashraf and Liberty. It got wounded, but while injured and bleeding, it stood up again and resumed its fight.

The message is simple: Carry on the struggle and uprising.

The message is that you must be more resilient in the face of suppression, injustice, pain and calamity.

As Massoud Rajavi said: “Rebels will win victory. And Iran’s destiny is written by the uprising of her children in the fields of sacrifice and struggle.” Yes, at the hands of you women and all the rebels.

We want and we can overthrow Khamenei and his regime and set Iran and all Iranians free.

You can and you must win victory.

You are the ones who can spark protests and strikes.

You are the ones who can set up resistance units and popular resistance councils.

And you are the ones who can encourage the restless youth in Iran to form their Resistance Units. Support them in any way possible. Shoulder the responsibility of inciting and advancing the uprising. Your suffering and efforts build the bridge to freedom, and on the other end of this bridge, again it is you, women who will emerge as leaders of a free and equal society.