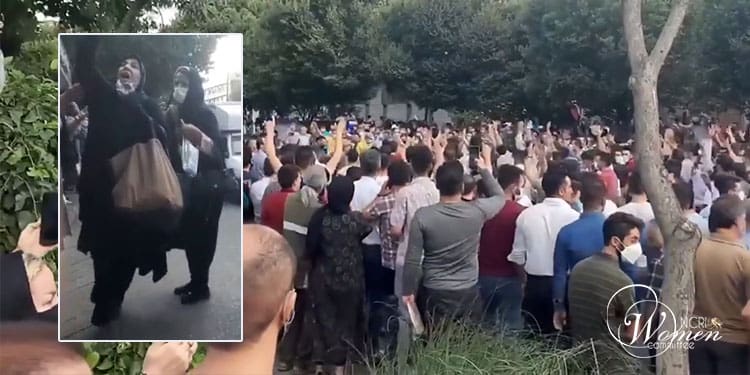 Tabriz rose up yesterday, July 24, and joined the protests, which started in Khuzestan province on July 15, 2021. Eyewitnesses said women played a leading role in the protests in Tabriz.

Tabriz is the capital of East Azerbaijan province in northwestern Iran.

The people of Tabriz took to the streets on Saturday, July 24, and staged extensive demonstrations to show their solidarity with the water protests in Khuzestan, in southwest Iran. Security forces intervened, arrested, and detained a number of protesters, including a good number of women.

Women played a leading role in the protests in Tabriz. They bravely went among security forces. Unconfirmed reports say the chants of women sparked the protest in Tabriz.

The people of Tabriz chanted, “Tabriz is awake and it supports Khuzestan;” “We do not support the Shah nor the Sheikhs, we support the people.”

In the meantime, more cities have joined the protests in solidarity with the people of Khuzestan, including Bojnourd and Miandoab.

Clashes with security forces have flared up in Shadegan and Aligudarz. The clerical regime dispatched a large number of troops to Shadegan, but the residents of Shadegan are standing up to the regime’s troops.

The UN High Commissioner for Human Rights Michele Bachelet has condemned the regime’s use of excessive forces against protesters who demand their right to water. She urged the regime to address the chronic water shortage instead of crushing the protesters.

The opposition People’s Mojahedin Organization of Iran announced on Sunday, July 25, the names of 12 young men who have been killed over the past 10 days in the protests over water shortage in Khuzestan: