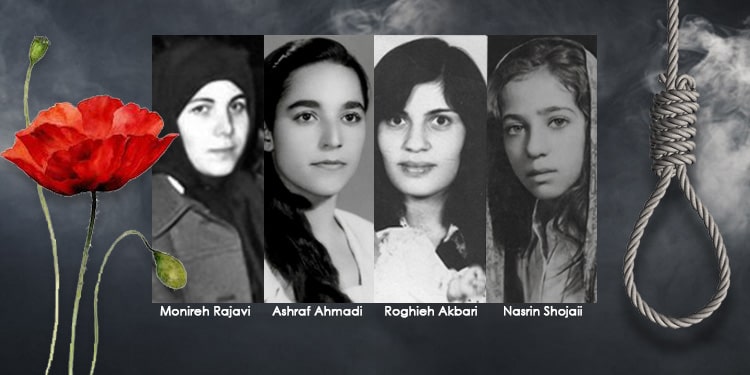 The final days of July every year mark the start of the 1988 massacre of 30,000 political prisoners in Iran upon a decree by the mullahs’ supreme leader at the time, Ruhollah Khomeini. A crime against humanity is described as the worst since the World War II, a crime that the people of Iran “will neither forgive, nor forget.”

The latest list of victims compiled indicates that the 1988 massacre took place in at least 110 cities. The most intense killings of the 1988 massacre began in Evin and Gohardasht prisons and were specifically aimed at PMOI members.

An extensive wave of political arrests was also launched in various cities right after the announcement of the ceasefire in the Iran-Iraq war, arresting over 10,000 persons.

Another part of the massacre was the emergency trials of supporters of the PMOI/MEK in western Iran as well as young men and women from other provinces who had gone to western regions to aid the PMOI/MEK.

Iranian opposition leader Maryam Rajavi said the massacre was “a blood-drenched encounter between the Middle Ages and future generations, the generations that created the 1979 revolution, who represented a nation committed to having a society based on freedom and equality.”

The Iranian authorities have refused to provide families the addresses of the graves of those executed. They have destroyed the mass graves.

Although, the location of the victims’ tombs is not known, but their memories live on, in the hearts of millions of Iranians.

Geoffrey Robertson QC, former United Nations judge and renowned human rights lawyer, who has investigated this crime against humanity, describes the massacre as the following:

Late in July 1988 as the war with Iraq was ending, prisons in Iran that were crammed with opponents suddenly went into lockdown.

All family visits were canceled, television and radios switched off. Prisoners were kept in their cells, not allowed exercise or trips to the hospitals.

The only permitted visitation was from a delegation, turbaned and bearded, which came in black government BMW’s. A religious judge, a public prosecutor, and an intelligence chief.

Before them were paraded briefly and individually, almost every prisoner, and then thousands of them who were being jailed for adherence to the MEK.
The delegation had but one question for these young men and women, most of them detained since 1981, merely for taking part in street protests or possession of political reading material. And although they did not know it, on their answer their life would depend. Those who (confirmed their) continuing affiliation with the MEK were blindfolded and ordered to join a line that led straight to the gallows.

They were hung from cranes 4 at a time, or in groups of 6, from ropes hanging from the front of the stage of the assembly hall. Some were taken to army barracks at night, directed to make their wills, and then shot by firing squad. Their bodies were doused with disinfectant, packed in refrigerator trucks, and buried at night in mass graves.

Months later their families, desperate for information about their children, would be handed a plastic bag with their few possessions. They would be refused any information about the location of the graves and ordered never to mourn them in public. By mid-August 1988, thousands of prisoners had been killed in this manner by the state. Without trial, without appeal and utterly without mercy.

In the heat of this carnage, in one of the wards of the Prison of Ahvaz, two blood-thirsty mullahs by the names of Jazayeri and Abdollahi bellowed, “You must make up your mind. Khomeini is on one side and Massoud Rajavi (the Leader of the Iranian Resistance) is on the other. Which side are you on?”

From the end of the hall, a young woman cried out, “Long live Massoud, down with Khomeini.” She was Sakineh Delfi, 26, a heroine from Abadan.
Upon hearing her cry, the Revolutionary Guards attacked her and badly brutalized her. The next morning, 349 of the 350 inmates in this ward were hanged.

The victims were young, energetic, knowledgeable, full of pride, beautiful and selfless, who bravely confronted the ruling despots. Many of them had finished serving their sentences. They defended freedom and embodied Iranian nation’s dignity.

It has been known that prisoners, including female prisoners, were firm and resilient and inspired resistance despite knowing the fact that they would have to go through the horrifying experience of rape before being hanged. But they said “NO” to the executioners.

According to Geoffrey Robertson, “The killing of prisoners is the worst of all war crimes; it has been for hundreds of years. The prisoner is utterly at the mercy of the state. That is why international law, from the 15th century, has given a special protection to prisoners of war… The liber code in 1863, in America, America’s war code, made it absolutely criminal to kill a surrendered prisoner. The Geneva conventions in 1949, the basis of international law, make it an international crime to kill a prisoner.”

A former UN Judge and President of the Sierra Leone Court, Mr. Robertson said: “There have been three heinous and hideous examples of that since the Second World War.

“The second example was Srebrenica, in 1992 when 7,000 Muslim men and boys were killed. What happened to those commanders who gave the orders, to Milošević and Karadzic? They are on trial at The Hague at this time. They were punished and will be punished.

“The third, the worst example, came in 1988 when thousands of upon thousands of prisoners who were in the first-place members of the MEK, then they came to the atheists, for the communists, for the liberals. People who were in prison for their politics, many of them had served their sentences; they’d been arrested in 1981 and were being held in prison although they finished their sentence, were killed, monstrously, and this is why, this dreadful act has never been punished.”

The regime ruling Iran has evaded publishing the information and details of the massacre of political prisoners in 1988 but has remained immune from international accountability.

The perpetrators of this crime against humanity, who were deeply involved in the bloody slaughter of the innocent prisoners, are now in control of the state.

The highest officials in charge of this crime and members of the Death Committees are among the senior officials presently running this regime, including the regime’s Chief Justice and head of the Judiciary, the Head of the Supreme Court and the so-called Justice Minister. All of them, however, are immune.

A number of them, including the mullahs’ supreme leader Ali Khamenei, defend the 1988 massacre. They even say that they are proud of it. And still, they enjoy impunity.

In a report published in December 2018, Amnesty International examined the 1988 massacre in Iran. It wrote, “Iran is facing a crisis of impunity… The succession of atrocities in Iran is intractably linked to the impunity that has been enjoyed by the Iranian authorities.”

Morgan Ortagus, the spokesperson of the United States State Department, in a video message on Twitter, recently said: “July 19th marks the anniversary of the start of Iran’s so-called death commissions on the orders of Ayatollah Khomeini. These commissions reportedly forcibly disappeared and extra judicially executed thousands of political dissident prisoners. The current head of the Iranian judiciary and current minister of justice have both been identified as former members of these death commissions. The Iranian judiciary is widely perceived to lack independence and fair trial guarantees. And the revolutionary courts are particularly egregious in ordering violations of human rights. All Iranian officials who commit human rights violations or abuses should be held accountable. The United States calls on the international community to conduct independent investigations and do provide accountability and justice for the victims of these horrendous violations of human rights, organized by the Iranian regime.”

The time has come for the international community to end three decades of impunity for the clerical regime leaders in Iran and to hold them accountable for their crimes.

The time has come for referring the dossier of human rights violations in Iran, particularly the executions of the 1980s and the 1988 massacre, to the UN Security Council.

The time has come for Khamenei and his accomplices to face justice for committing crimes against humanity.

The time has come for the United Nations to launch an international fact-finding mission on the 1988 massacre in Iran.

How could the world tolerate sitting in the United Nations side by side with those directly involved in the massacre of tens of thousands of prisoners? How could they negotiate and do commerce with them? This is a travesty for human rights.