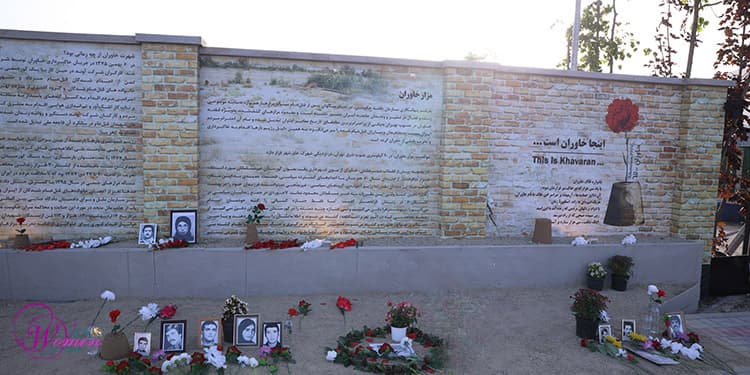 A symbolic reconstruction of Khavaran at Ashraf-3

Murderers try to conceal the evidence of crime against humanity

International Day of the Victims of Enforced Disappearances is a reminder to the people of Iran of the 1988 massacre and the burial of the bodies of thousands of massacred prisoners in mass graves in Iran.

Every year, on August 30, the International Day of the Victims of Enforced Disappearances focuses on the fate of those forcibly disappeared in dictatorial regimes, wars, political conflicts, immigration routes, or unknown reasons. According to the United Nations, thousands of people worldwide are being held in unfavorable conditions and in places where their relatives or legal representatives are unaware.

Enforced disappearances by governments are not always to prevent activities in which the missing person is involved. The goal is also to intimidate the family, co-workers, and those around the person.

For 33 years, “the Iranian authorities have refused to disclose the fate and whereabouts of thousands of political dissidents who were forcibly disappeared and extra-judicially executed in secret during the 1988 prison massacres. This is a crisis largely overlooked by the international community for decades,” said Amnesty International on August 28, 2019, in the lead-up to the International Day of the Victims of Enforced Disappearances.

The deaths of thousands of the victims remain unregistered, and there are thousands of missing bodies buried across the country in unidentified mass graves.

“For more than 30 years, the Iranian authorities have failed to publicly and officially acknowledge the existence of these mass graves and concealed their locations causing immeasurable suffering to families who are still seeking answers about their missing loved ones,” AI added.

Reza Malek, a former Deputy Minister of Intelligence, revealed in a message to the UN Secretary-General: “If you are looking for genocide and criminals, there are more than 170 to 190, maybe even more, mass graves in Iran. Your Excellency, some of the mass graves contain the bodies loaded in a small truck others the bodies emptied from three or four refrigerated containers.” (Mojahedin.org – July 27, 2015)

The Cemetery of Zanjan

A witness reported, “On August 21, 1988, a Revolutionary Guard who had a piece of paper in his hand came forward and said he reads the names of some prisoners who should be ready. Minutes later, they took the prisoners to the village of Hassanabad, west of Zanjan, where they executed them. They transferred the bodies to a cemetery in upper Zanjan, located on Dabbagh-ha Street.

The cemetery’s guard said, “At night, I saw many cars enter the cemetery. They dug large pits at three points. Then they emptied three carloads of bodies into the pits.”

The guard continued, “They poured three carloads of lime on the bodies. The next night I went to the burial site and saw a hand sticking out of the soil. I dug a little and put the hand under the soil. It was the hand of a girl.”

The Cemetery of Dezful

Mohammad Reza Ashough, a witness who managed to escape the massacre at the last minute, reported that 44 prisoners were summoned to this so-called “UNESCO Prison” under the pretext of relocation. An hour later, each was handed a shroud to wear. Then they took them out of the city, killed them all, and buried them en masse.

The Cemetery of Golestan

In a report about Agh-Seyed Morteza Cemetery in Golestan Province, northern Iran, one resident states that stray dogs increased in the area at night and started digging. When the soil was removed, the buried bodies protruded out. The dogs tore off a victim’s clothes and hands.

The Cemetery of Urmia

Bijan Pirnejad, a member of the People’s Mojahedin Organization of Iran (PMOI/MEK), says his brother, Houshang Pirnejad, was executed during the massacre despite being paralyzed.

“My younger brother, Houshang, had finished serving his sentence. In August 1988, he was among a group of PMOI prisoners taken out of Urmia Prison under the pretext of being transferred to the Prison of Tabriz. They were packed in two minibusses and taken to lake Urmia’s hills, an area controlled by the IRGC.

Some Revolutionary Guards armed with cold weapons such as knives, machetes, clubs, sticks, axes, and cleavers were waiting for them.

They attacked the hand and foot-cuffed prisoners and literally slaughtered them. The screams of the prisoners attracted some of the villagers, who rushed to the place but were threatened and forced to leave by the guards. Those prisoners were buried in the Cemetery of Urmia.

On April 29, 2018, Amnesty International published a report containing new evidence and documents on the mass graves in Iran where prisoners had been buried.

The report includes satellite images, pictures, and analyzed videos of the mass graves. Iranian officials destroy the confirmed or alleged mass graves of prisoners massacred in 1988. In the massacre, thousands of prisoners were forcibly disappeared on political grounds and extra-judicially executed.

Amnesty International’s report, the “Criminal Cover-up,” points out, “Amnesty International and Justice for Iran have examined the situation of seven confirmed or suspected containing mass grave sites. Their research reveals that the Iranian authorities have engaged in a number of actions between 2003 and 2017 to desecrate and otherwise damage the sites. They include: bulldozing, hiding the mass graves beneath new, individual burial plots; constructing concrete slabs, buildings or roads over the mass graves; and turning the mass grave sites into rubbish dumps. In at least three cases, the authorities appear to be planning actions that would further damage the mass graves.”

A cruel crime, persisting and ongoing

Enforced disappearance is among the worst violations of human rights. People are snatched from their families by state officials or others acting on their behalf, who subsequently deny the person is in their custody or refuse to say where they are. Families are thus plunged into a state of anguish, desperately trying to keep their hope alive while fearing the worst.

There is no crime crueler than the “disappearance” of a human being. Enforced disappearances are a tool of terror with a devastating impact that strikes not just individuals and their families but entire societies, leaving scars that are very difficult to heal.

Therefore, they are a crime under international law, and if committed as part of a widespread or systematic attack directed against a civilian population, they constitute a crime against humanity.

For most relatives of the disappeared, the loss of the loved one continues to feel recent, even when logic tells them that the person is most likely dead. So long as there’s uncertainty, there will be hope. So long as there’s hope, they remain trapped in a torturous limbo, unable to mourn or move on with their lives. For parents, abandoning hope feels like a betrayal, like they are killing their own child.

According to international law, the crime of enforced disappearance persists until the state reveals the fate or whereabouts of the victim. If the disappeared person is dead, the state must return the victim’s remains to their family.

The need to discover the truth and implement justice

The true scale of the atrocity and the consequences of the 1988 massacre has not yet been established. The graves of the victims are still unknown to many families, and the main perpetrators of the massacre have not been prosecuted and punished.

The leading figures of the 1988 massacre have been in positions of authority for years. Most recently, one of the perpetrators instrumental in the massacre of the summer of 1988, Ebrahim Raisi, became the regime’s president.

Giving impunity to the clerical regime’s leaders allowed them to deny this crime according to an organized plan, just as they carried out the massacre of prisoners and those arrested according to a well-planned scheme.

This and turning a blind eye to their crimes are the very reasons they have become emboldened in continuing their crimes to this date.

Simultaneous with the International Day of the Victims of Enforced Disappearances, the Women’s Committee of the National Council of Resistance of Iran calls on the international community, the United Nations, and in particular the UN Working Group on Enforced Disappearances, to investigate the massacre of more than 30,000 political prisoners and the mass graves in Iran.