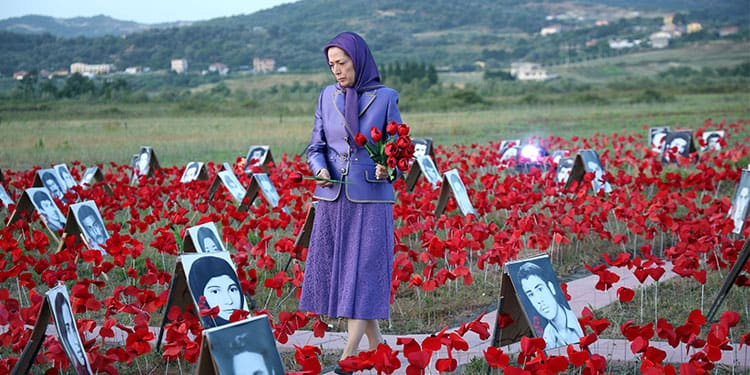 The campaign seeking justice for the victims of the 1988 massacre is the movement of all Iranian people.

“I think that everyone sings a song during his/her lifetime and dies. But what remains in the end is a pure and untainted form of humanity that lives on.”

These are the words of Zohreh Ain-ol-Yaqine, one of the victims of the 1988 massacre in Iran, quoted by Mrs. Maryam Rajavi in her speech to the Free Iran World Summit 2021.

On the third day of the summit, the President-elect of the National Council of Resistance of Iran concentrated her remarks on this greatest crime against humanity after the Second World War and the campaign seeking justice for its victims. She also called for the international prosecution of the mullahs’ supreme leader, Ali Khamenei, the regime’s incoming president, Ebrahim Raisi, the new head of the Judiciary, Gholam-Hossein Mohseni Ejeii, and other regime officials and leaders involved in this crime. She said this is the most urgent demand of the victims’ families and all the people of Iran.

Excerpts of her speech appear below:

The 1988 massacre was one of the darkest moments in Iran’s contemporary history. In the words of Baroness Boothroyd, the former speaker of the UK House of Lords, it is the greatest crime against humanity since the Second World War, which has gone unpunished.

At this point, let us go back 33 years. Let us imagine the scene of questions and answers, each of which determined the fate and life of a prisoner.

In small rooms in the prisons of Evin, Gohardasht, Mashhad, Isfahan, Shiraz, Tabriz, Ahvaz, and dozens of other cities, prisoners were condemned to death without having committed any crime.

On the one side sat the mullahs and the executioners of the death commissions. One of the most savage and cruel figures among these demons was Ebrahim Raisi.

On the other side is a lone prisoner in the dock. He has not committed any crimes. However, in the eyes of the prosecutors, the prisoner represents the “crime” of a movement. The prisoner has no lawyer but must defend the rights of an oppressed nation. There are no witnesses to this unfair trial. He is the only witness.

Most astonishingly, the questions are not about the commission of any crime but inquire about which side of history is the prisoner on?

Here are the questions:

Are you prepared to denounce the PMOI and its leadership?

Are you willing to join the armed forces of the Islamic Republic and fight against the PMOI?

Are you willing to provide information on former comrades… and “co-operate” with intelligence officials?

Are you willing to participate in firing squads?

Are you willing to hang a monafeq (a pejorative epithet for members and supporters of the PMOI)?

Are you prepared to express “repentance” about your political opinions and activities?

Are you prepared to declare loyalty to the Islamic Republic (through written and/or televised “confessions”)?

Are you willing to walk through an active minefield to assist the army of the Islamic Republic?

The question of our time

I quoted these appalling questions posed to the victims of the 1988 massacre from Amnesty International’s investigative report.[1]

His decree specifically concerns the PMOI. The decree says that “those who persist in their allegiance to the PMOI in prisons across the country are at war with God and are sentenced to death.”

Khomeini’s clear and concise answer was: “Anyone, at any stage, is sentenced to death if he maintains his positions as a hypocrite (i.e. People’s Mojahedin).”

The distillation of the two decrees of Khomeini and the short version of the questions in these show trials are: Do you stand by your position as a People’s Mojahedin?

The Mojahedin answered yes to this question and accepted to be executed.

On the 30th anniversary of the 1988 massacre, Amnesty International wrote in its report: “Across the country, the victims were primarily supporters of the PMOI, both men and women. In Tehran province, hundreds of men affiliated with leftist opposition groups were also executed.”

Thus, the massacre of the Mojahedin-e Khalq was carried out throughout the country. At the same time, the regime’s murderous machinery re-arrested many former prisoners or persons suspected of supporting the PMOI and sent them to execution chambers.

All of them faced the same question that determined their fate: Do you maintain your positions on the PMOI?

We have answered yes to this question, and we will answer yes again and again. We will never abandon the resistance to free the Iranian people and to overthrow the regime.

What remains is a pure and untainted form of humanity

In the summer of 1988, after the mass murderer Raisi and his accomplices sentenced them to death, the PMOI heroes walked through the corridors leading to the execution chamber while shouting, “Down with Khomeini! Long live freedom! Long live Massoud Rajavi!”

This is freedom’s blood-drenched anthem, and the song of perseverance of a generation determined to write a new destiny for the Iranian people and history.

One of these heroines was the U.S.-educated Zohreh Ain-ol-Yaqine, then head of Isfahan Teachers’ Association. In a letter from Evin Prison, she wrote, “I thought about everything that has happened so far and went through everything in my mind. I think that everyone sings a song during their lifetime and dies. But what remains, in the end, is a pure and untainted form of humanity that lives on.”

Another one of these heroes was Rahim Rajli. He wrote in his will, “I love life with all its beauties; I love everything that blooms (…) I do not wish to die. But, for the sake of life, I embrace the crimson death with open arms. And if I have the honor of falling as a martyr on this path, send my greetings to Massoud [Rajavi], and tell him that Rahim kept his promise and he has become a Rajavi.”

This is the blood-drenched commitment of all generations of the PMOI, as Maryam Golzadeh-Ghafouri wrote: “As long as there is even a single Mojahed, he will not let the revolution be stopped. The People’s Mojahedin will sacrifice everything they have in order to free Iran and the Iranian people from captivity.”

Safeguarding the values and principles cherished by the massacred victims

The massacre of the People’s Mojahedin had another important aspect, which comprised of a vast effort to cover up this crime. But from the very first weeks after the start of the massacre, Massoud Rajavi issued a wave of statements, revelations, and calls for justice in Iran and abroad.

As early as August and September 1988, he made numerous revelations about the massacre in multiple letters and telegrams to the UN Secretary-General. Among other things, he revealed the contents of Khomeini’s two main religious decrees. On August 25, 1988, he wrote to the UN Secretary-General that Khomeini had issued a decree in his own handwriting ordering the execution of PMOI political prisoners.

In December of the same year, in an interview with Voice of Mojahed Radio, Massoud Rajavi explained that “On two occasions, Khomeini personally issued the execution orders to the head of the Judiciary Moussavi-Ardebili, stressing, among other things, that in the case of the Mojahedin (…) anyone who insists on his/her positions (…) is sentenced to death and must be executed immediately.”[2] This was twelve years before Ayatollah Montazeri (Khomeini’s ousted heir apparent) published the text of this decree in his book.

In my view, what Massoud (Rajavi) has done goes far beyond the relentless campaign of the last four decades. By safeguarding the very values and principles cherished by the victims of the massacre through seeking justice for them, he has defended their dignity and honor to the greatest possible extent. This call-for-justice campaign will continue until achieving victory for the cause of these martyrs, namely, the liberation of the Iranian people.

It is very noteworthy that in the April 1989 letter dismissing Mr. Montazeri, which was about 700 words long, Khomeini referred to the PMOI nine times, accusing Mr. Montazeri of assisting the Mojahedin in their attempts to find out the number of execution victims through him. More importantly, he said that after him, Ayatollah Montazeri would hand over the country to the liberals and through them to the PMOI. And because of this, he explains, Montazeri lost the competence and legitimacy to lead the regime in the future.

As attested to by the events of the past 33 years, the revelations about the 1988 massacre resulted from a relentless campaign seeking justice. The Iranian people’s Resistance, the families of martyrs, political prisoners, torture victims, and 1,000 political prisoners from among the survivors of the 1988 massacre who are based in Ashraf-3 are responsible for this campaign.

Call for international prosecution of Khamenei, Raisi, and Ejeii

We say to the world community, especially to Western governments, that Mullah Raisi is a criminal guilty of genocide and crimes against humanity in 1988.

He is guilty because, as one of the regime’s highest Judiciary officials during the last four decades, he played a decisive role in the execution and murder of the Iranian people’s children.

He is guilty because he is one of the leaders of a regime that killed 1,500 youths during the November 2019 uprising, a figure that researchers say is actually three times higher. Raisi is guilty because even today, he defends all his past crimes and insists on continuing them.

As Amnesty International’s Secretary-General said, “That Ebrahim Raisi has risen to the presidency instead of being investigated for the crimes against humanity of murder, enforced disappearance, and torture is a grim reminder that impunity reigns supreme in Iran.”

On behalf of the Iranian people and their Resistance, I emphasize that the United Nations and the international community should recognize the 1988 massacre in Iran as genocide and a crime against humanity.

I call on the UN Security Council to take action to hold the leaders of the mullahs’ regime, especially Ali Khamenei, Raisi, and Ejeii, accountable for committing genocide and crimes against humanity. The United Nations must not allow Raisi to participate in the next session of the General Assembly. This would be an unforgivable insult to the people of all countries who send their representatives to the United Nations.

[2] In a telegram to the UN Secretary-General on August 25, 1988, the Iranian Resistance’s Leader revealed the fact that “Khomeini issued a decree in his own handwriting several weeks ago, ordering the execution of PMOI political prisoners.” In the same telegram, he also revealed a wave of political arrests made throughout Iran. In December that year, the Leader of the Iranian Resistance, in an interview with the Voice of Mojahed, reiterated: “Khomeini has personally informed Moussavi Ardabili twice of the death sentences. Among others he insisted that any one of the PMOI prisoners, who continued to adhere to his past positions, is punishable by death and must be immediately executed.”