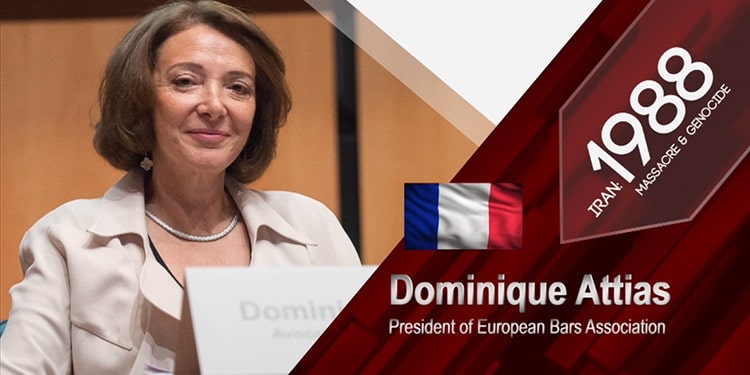 Experts call for accountability of Iranian regime leaders for the 1988 massacre.

More than 1,000 witnesses of the 1988 massacre in Iran convened in an online conference on Friday, August 27, 2021. The event featured dozens of jurists and experts in international law and the President-elect of the National Council of Resistance of Iran, Mrs. Maryam Rajavi, the architect of the Iranian Call for Justice Movement.

Mrs. Rajavi underscored, “The 1988 massacre is a clear example of genocide. In January 2010, Ebrahim Raisi, the regime’s current president, declared that ‘All Mojahedin are enemies of God and punishable by death.’”

She called on the U.S. and Europe to recognize the 1988 massacre as genocide and crime against humanity. “They must not accept Raisi in their countries. They must prosecute and hold him accountable,” she added.

Mrs. Rajavi also reinstated her call to the UN Secretary-General, the UN High Commissioner for Human Rights, the UN Human Rights Council, the UN special rapporteurs, and international human rights organizations to visit the Iranian regime’s prisons and meet with the prisoners there, especially the political prisoners. She added that the dossier of human rights violations in Iran, especially regarding the regime’s conduct in prisons, should be submitted to the UN Security Council.

Madam Dominique Attias, a jurist, was among the speakers at the conference, which marked the 33rd anniversary of the 1988 massacre. Ms. Attias is the President of the European Bars Federation, with more than one million lawyers as its members. She was vice-batonniere of Paris from January 2016 and the first woman to hold this position. She was also a recipient of France’s Légion d’Honneur in 2011.

Ms. Attias said in her remarks: “Mrs. Rajavi, you are a shining star in the depth of darkness. Today is a significant and sensitive day. We know what is happening in Iran. (But) the light of hope comes from Iranian women. Thanks to you, the Women’s Committee of the National Council of Resistance of Iran, and the men along your side, all these women, all these young women, will be avenged. (The Iranian regime) caused chaos and destruction. They took many lives. Mothers, sisters, and children are still grieving. Yes, we are talking about genocide. We are talking about a crime against humanity. But enough is enough! Enough of Europe and the entire world turning a blind eye to these crimes. Today, a mass murderer with bloody hands is ruling Iran. I saw his endorsement in the parliament, but you and we will not accept this. Iranian women will never accept this because the status of women is a fundamental issue. Women were physically eliminated in 1988. Hardly any of them survived the slaughter. If we close our eyes on this incident, it will also happen in our countries.

“Women are stars who shine on to the world. They always draw the path of justice. I will stand by you. The European Bar Associations will stand by you. We, women, make up 52% of the world’s population. We have the majority in all countries and the Bar Associations. We are present everywhere. But it is over now. It is over. And you, Mrs. Rajavi, you are present to keep the flag aloft with great courage. You are the future president of Iran, and we will stand with you to the end. We will keep the red flags aloft in support of all the women who are no longer among us but are watching us from above. They tell us: Continue! Keep going! The United Nations must hear our voice. They must hear us…. We will always stand by you. We will always stand by well-intentioned Iranian women and men.”

Another speaker at this event was Ms. Gulnara Shahinian from Armenia. Ms. Shahinian was the UN Special Rapporteur on Contemporary Forms of Slavery (2008-2014).

In parts of her remarks, she said, “Thank you very much for inviting me to this panel. And I was very, very interested in listening to the voices from the field… Last year, I was among the 154 signatories of the letter to the U.N. seeking a commission of inquiry into Iran’s 1988 extra-judicial executions of thousands of political prisoners.  That call states that the families of the victims, survivors, and human rights defenders are today the subject of persistent threats, harassment, intimidation, and attacks because of their attempt to seek information and to seek truth… Amnesty International and other organizations, in their recent reports and also the special rapporteur on summary and arbitrary executions, expressed concerns that reported attempts by Iranian authorities to continue and destroy evidence of past violations, including the reported mass extrajudicial executions of political dissidents of 1988. Covering mass gravesites, which is believed to contain the remains of the victims of enforced disappearance and summary executions perpetrated in 1988. This order is the latest of the attempt to interfere with evidence of the executions, which have included bulldozing gravestones and the harassment of the relatives such as Maryam Akbari Monfared, who are seeking truth and accountability… We have to call for accountability. We cannot allow it to happen again in any country of the world.”