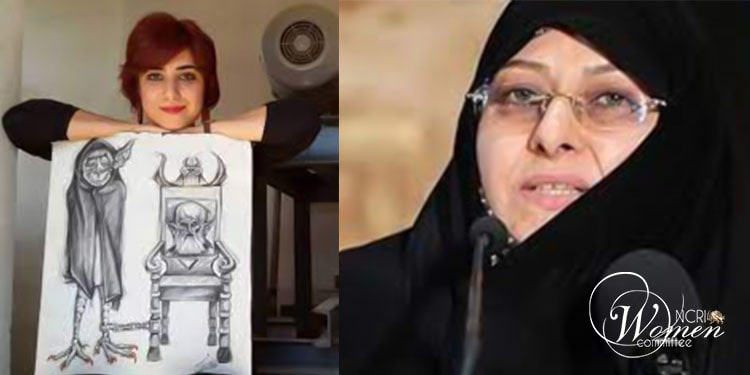 On Wednesday, September 2, 2021, Ebrahim Raisi, the Iranian regime’s new president, appointed Ensieh KhazAli as the Women and Family Affairs director. This post is the only post in the government that women can sit on. Therefore, KhazAli is the only female member of Raisi’s government.

Nevertheless, the former heads of the directorate have repeatedly acknowledged that they had no executive power and that such minute defense of women’s rights would go nowhere in the mullahs’ patriarchal system. Massoumeh Ebtekar, who headed the organization before KhazAli, admitted in August 2021 that “there is a sense of discrimination against women due to some approaches to the law and the existing biases have made this task difficult.” (The state-run ISNA news agency – August 10, 2021)

Ensieh KhazAli was born in 1963 in Qom. She studied at the Seminary School of Qom and finished Level 3. Her father was Abolghasem KhazAli, a former member of the Assembly of Experts who died in 2015. Ensieh KhazAli’s sister heads the Cultural and Social Council for Women and the Family in the Supreme Council of the Cultural Revolution.

The KhazAli family was closely associated with Ruhollah Khomeini, founder of the mullahs’ religious dictatorship in Iran. Ensieh KhazAli said that Khomeini had read her wedding sermon personally and set her dowry at 14 gold coins. (The state-run namayande.com – June 7, 2017)

Ensieh KhazAli’s husband, Rezazadeh, was the son of a member of parliament during the Shah’s dictatorship. He changed colors during Khomeini’s reign and participated in the theft of the Iranian nation’s assets by joining the Revolutionary Guards and suppressing the people. Rezazadeh has occupied thousands of plots of land. He also constructed the Gotvand Dam, which has dried up the groves and rivers in Khuzestan. (Saraneh news channel on YouTube – September 2, 2021)

The family owns four houses in Darband, several houses in Elahieh, several villas in northern Iran, and two villas in Dubai. Ensieh KhazAli’s brother has estimated the capital of this family at 500 billion Tomans.

Ensieh KhazAli personally received a house as a gift from the regime’s president, mullah Ebrahim Raisi, which belonged to the former Shah of Iran. Ensieh KhazAli has also received another piece of land from the lands confiscated by the regime. Ensieh KhazAli’s son-in-law is the son of Assadollah Lajevardi, the notorious Butcher of Evin Prison. (Saraneh news channel on YouTube – September 2, 2021)

Ensieh KhazAli has a Ph.D. in Arabic language and literature. Her resume includes the presidency of Az-Zahra University, the dean of the campus of Razavi University, and a member of Az-Zahra university’s faculty.

Ensieh KhazAli is the Women and Family Affairs director in a government notorious for its repressive policies and mass murders.

She is the only one in Raisi’s government tasked with defending women’s rights, yet she is affiliated with the regime’s most misogynistic faction and represents its interests. She admits that she has not been independent even in her private life despite her education and background.

In an interview, she responded to whether her husband did not complain about her many chores outside the house. Ensieh KhazAli said that “men do not like their wives to be out of the house very much. My husband even set the limit of 15 hours per week for my work outside the house. My husband expects that I always accept what he says, and I always do so.” (The state-run namayande.com – June 7, 2017)

As the only representative of women’s rights in the government, Ensieh KhazAli advocates for early marriage for girls. In a June 2017 interview, she said that she had married at 16, and her children did so, too. (Persian Independent – September 1, 2021)

Elsewhere, she said: “All four of my children are married, and in our own way, I tried to get my children married soon. Their dowries were 14 coins, each.” (The state-run namayande.com – June 7, 2017)

“People do not have children because they look for their own comfort. They do not want to sacrifice their comfort for others and see children as obstacles to their interests. We must promote this belief that getting married brings wellbeing to families,” Ensieh KhazAli told a conference in June 2015.

In a case of sexual harassment of boy students in Tehran by a school headmaster in 2018, the newly appointed Women and Family Affairs director assailed the U.N. 2030 Education Document. Instead of defending the victims’ rights and seek prosecution of the corrupt authorities, she said, “This issue is a tool for the Education 2030 document that intends to remove all forms of shame from our society to achieve its goal.” (The state-run iscanews.ir, May 30, 2018)

Ensieh KhazAli also defends women’s marginalization under the pretext of population growth. At a conference entitled “Family Sustainability, the Excellence of Society” held in 2015 at Az-Zahra University, she said, “Having children has decreased due to indolence; Because people do not want to sacrifice themselves and make time for others.”

At the same conference, she defended the “interests of men” on the subject of dowry and said, “Men should be able to afford the dowry; the simpler life is, the closer couples are.”

Ensieh KhazAli was the president of Az-Zahra University, during which time students suffered severely from her misogyny and reactionary outlooks.

Ensieh KhazAli had told her brother that mullah Ta’eb had granted her the decree to become the president of Az-Zahra University. Ta’eb is the head of the Revolutionary Guard Corps (IRGC) Intelligence. (Saraneh news channel on YouTube – September 2, 2021)

Mullah Ta’eb personally raped Taraneh Moussavi during the 2009 uprisings in Iran. His forces killed Taraneh and burned her body and abandoned it in the street.

Az-Zahra University is the first utterly segregated university in Iran. KhazAli implemented the Moral Charter at the university. (The state-run farhangemrooz.com – April 16, 2014) The charter is the basis in Iranian universities for the repression of female students by university security under moral pretexts.

During her presidency, Ensieh KhazAli expelled Atena Farghadani, a civil activist sentenced to prison for insulting the clerical regime’s officials and members of the mullahs’ parliament by drawing cartoons.

Former political prisoner Atena Farghadani, a talented student of Az-Zahra University with a grade point average of 19.78 [from 20] and the highest ranking in the field of art, designed a cartoon in response to her insult and expulsion from the university. Addressing KhazAli, she said, “In response to insulting and humiliating me by expulsion from the university, the only good gift I could give you was to design something dormant inside you for years!”

Literacy in Iran - women, and girls make up two-thirds of illiterates