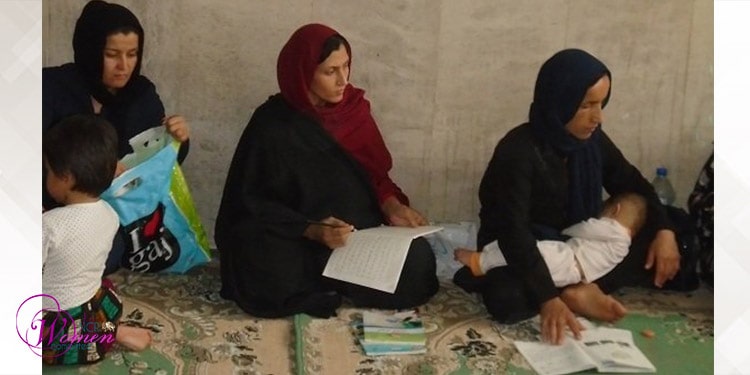 September 8 marks International Literacy Day. Literacy gives people the possibility of education, enabling them to reach their goals and expand their education and potential for full participation in the larger society. The theme of Literacy Day 2021 focuses on the fundamental relationship between literacy and peace.

In the rich culture of the Iranian people, literacy is of particular importance. Ironically, under the mullahs’ rule, two-thirds of the illiterate population are women.

Under Iran’s misogynistic rule of religious fascism, women and girls are considered second-rate citizens in all realms, including literacy and education.

One of the significant problems in Iranian society today is the lack of access to free education. With 80% of the population living under the poverty line, children’s education and literacy are not among the family’s priorities, particularly girls. So, girl children are first deprived of schooling and then forced into early marriages. For this reason, child marriage has turned into a social catastrophe in Iran.

In 2019, the parliament’s Research Center reported at least nine million illiterates, 10% of the population. Another 11 million people have little literacy. (The state-run farhangesadid.com, December 30, 2019)

The state media say 60% of the illiterates are women. (The state-run Tasnim news agency – April 25, 2018) In light of the regime’s bankrupt economy and the existing discriminations against women and girls, this figure should not have improved in the past three years.

Education during the pandemic

After the Coronavirus outbreak in Iran, about 3 to 3.5 million students dropped out of school. The shocking figure signals the decline in education under the mullahs’ rule.

Some 40,000 students dropped out of school just in the Razavi Khorasan province, northeastern Iran, said Qassem Ali Khodabandeh, the director of the Department of Education. It is the highest number of dropouts in the country.

After the outbreak, the clerical regime embarked on a theatrical measure, launching an online educational network called “Shad” (meaning happing in Farsi) without providing the necessary devices for Iranian students.

Improper distribution of educational infrastructures, lack of funds in deprived areas to buy tablets, smartphones, etc., frequent power outages, lack of Internet in provinces such as Sistan and Baluchestan and Bushehr, and weak Internet line across the country led to the failure of the “Shad” network plan, effectively creating a crisis in education.

30% of students, or about 5 million, do not have intelligent teaching aids, says Javad Hosseini, head of the Exceptional Education Organization.

The National Statistics Center (NSC) officially confirmed in a report on December 22, 2020, that the dropout rate has almost doubled since the outbreak.

With the virtualization of education without providing the necessary infrastructure, poor students suffered double deprivation and difficulty.

In addition to students who dropped out of school, students in low-income families could not afford to buy a smartphone, and some of them committed suicide.

Parastoo Jalili Azar was one such student living in a village near Urmia, the capital of West Azerbaijan province, NW Iran. She took her own life.

On December 31, 2020, the state media in Iran published an ad to sell a 9-year-old girl’s hair because her mother did not afford to buy her a mobile phone to study online at home. (The state-run Khabarforionline.ir – December 30, 2020)

Due to the weak internet line, other students, including young children, travel miles to reach the Internet in dangerous high altitudes and connect to online classes with a smartphone. In 2020, people posted the unfortunate news of children falling from heights on numerous occasions.

Re-opening of schools during Coronavirus peaks

The Coronavirus has taken a heavy toll on millions of Iranian students. Overlooking the health protocols and the need for lockdowns, the clerical regime opened schools in mid-September. But due to the protests of the students’ parents, they were forced to close in-person education.

Some 30,000 students under 18 years have contracted the Covid-19, and 300 have lost their lives, reported Hossein Kermanpour, managing director of the Emergency Clinic of Sina Hospital in Tehran. (The state-run Etemadonline.ir – October 2, 2020)

Nevertheless, the Education Minister announced that they would open the schools in February and resume in-person classes. (The official IRNA news agency – January 11, 2021) The announcement came in step with the 4th peak of the pandemic in Iran and the banning of purchase and import of foreign vaccines by the mullahs’ supreme leader on January 8, 2021. Massoud Mardani, a member of the science committee of the Coronavirus Task Force, asserted, “It is dangerous to rush the re-opening.”

Various regime officials cited the early re-opening of schools as one of the reasons for the transmission of the British variant. The virus is more common in people under 20, especially children, than the non-mutant variants.

We conclude by emphasizing that according to Article 30 of the regime’s constitution, the government must provide free education for all children and adolescents by the end of secondary education. However, schools and universities have privatized and demand tuition from students. As a result, thousands of children and adolescents in Iran have been deprived of access to education. Iranian girls are left out of school more than boys. The number of girls who have to drop out of school is three times that of boys. (The state-run ANA news agency – September 17, 2019)

As far as the clerical regime is concerned, its routine method is discrimination against girls and women in education and literacy, leading them to early marriage and marginalizing them in the house. But those girls who get the opportunity of receiving education use this opportunity with great motivation. About 60% of university graduates and holders of higher education are Iranian women. However, due to double oppression, discrimination, and deprivation of equal opportunities, most women cannot find a suitable job and remain unemployed. For these reasons, women and girls oppose this regime and are the main force for change in Iran.