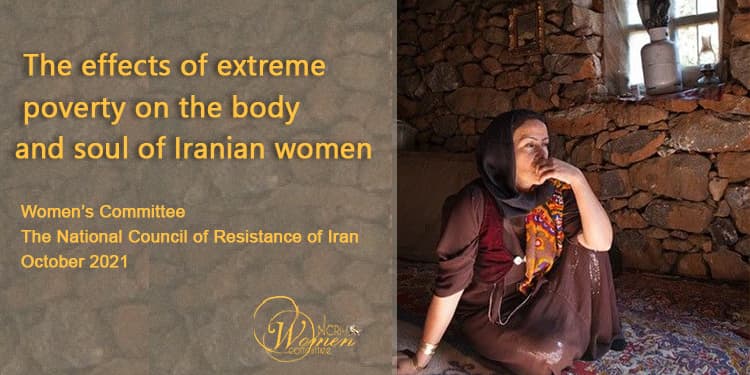 A brief look at the spread of extreme poverty in Iran and its “feminization,” as a human rights violation in Iran by the mullahs’ regime.

On October 17, 1987, more than 100,000 people gathered in Trocadero Square in Paris to commemorate the victims of extreme poverty, violence, and hunger. This demonstration led to the creation of the World Day to Overcome Extreme Poverty, officially recognized in 1992 by the United Nations as the “International Day for the Eradication of Poverty.”

For this reason, with a brief look at the spread of poverty in Iran and its “feminization,” we focus on this aspect of the human rights violations of the Iranian people by the mullahs’ regime. The gross and brutal manifestations of human rights violations in Iran makes poverty a secondary issue. However, the study of the spread of extreme poverty among the Iranian people especially Iranian women can be a strong and sufficient reason for the illegitimacy of the mullahs’ rule over this rich nation.

Even though the information and statistics that have been collected, do not tell the whole story, but since it is entirely extracted from the comments of government officials, experts and the regime’s own media, it can show the immense human tragedy being unfolded in Iran.

Only a few months into the formation of the Raisi’s government, the upward trend in prices has taken a new momentum. The prices of the items in the basket of consumer goods for people’s daily needs have increased by 10 to 50 percent.[1]

The overall quality of life in general and the lives and livelihoods of deprived women and families, especially in the context of both poverty and the pandemic, has moved the boundaries of disaster. Most people are in dire need of food, housing, medical care, clothing and necessities of life and their situation is deteriorating by the day.

The coronavirus epidemic has plunged many businesses into the verge of bankruptcy leading to many people losing their jobs and incomes. During this period, many families in Iran are dealing with a decline in their income while facing a significant rise in the price of everyday household items. For example, the price of some food items has risen by 90% and the housing rental have multiplied.

Roozbeh Kordoni, the head of the Higher Institute for Social Security Research, said the number of people below the absolute poverty line in Iran has doubled.[4]

The first report of the Ministry of Labor, and Social Welfare of Raisi’s government was published in August 2021. According to the report, the number of people below the poverty line in Iran in 2020 had reached 36 million.[5]

Meanwhile, Shahab Naderi, a member of the parliament in 2017, revealed that 80% of Iranian society lives below the poverty line.[6]

The continuation of the mullahs’ rule will lead to a more bleak and dire situation for women in Iran. To survive, women will be compelled to gather garbage, work as human mules, sell their organs, prostitute themselves and sell their infants amongst all kinds of other calamities.

With the spread of extreme poverty in Iran, women face serious inequality in employment.

According to the official statistics of the Statistics Center of Iran, in spring of 2021, 4.2 million women have been registered as economically active population, which is equivalent to 14.1%. According to the center’s indicators, an economic activist is a person who is employed or looking for a job. In other words, this statistic includes unemployed women looking for a job as well. Meanwhile, housewives, retirees, students, and all those who are frustrated with finding a job are considered as the economically inactive population and are not considered unemployed.

From another report by the Statistics Center of Iran, it can be concluded that the percentage of decline in the number of working women in Iran from fall 2019 to fall 2020, during the first year of the Covid-19 pandemic, was almost 14 times higher than men.[9]

“It is not possible to predict an increase in employment and participation rates for women in 2021,” said Fatemeh Azizkhani, an economic researcher on the prospects for women’s employment. “This anticipation is not reachable until the infrastructure is provided for women.”[10] She added.

The majority of working women are engaged in informal employment

Informal employment comes in various forms but all of the women involved face common problems. They do not have insurances; they are deprived of medical services and medical records. They have no benefit from pensions and unemployment insurance, and finally, protection laws and safety and labor laws do not give them coverage. Sometimes, employers exploit these women by taking white-collar checks and promissory notes from them and they have to comply because any job is better than unemployment for these desperate women.

Self-employed women, including peddlers in public and subway spaces, suffer from social and occupational insecurity, such as occasional arrests, and the tightening of employment space.

Women who work in family businesses are forced to submit to any kind of exploitation by their male relatives. [13]

All of these problems have multiplied since the beginning of the Covid-19 pandemic. Declining demand in the service sector has led to the widespread disappearance of these jobs. [14]  Since no government agency cares about the safety and health of these women, they have always been alone and fought alone, and now they are alone in the Coronavirus crisis! [15]

Fatemeh Ghafouri, head of the Women Entrepreneurs Association in Qazvin province, says of the clerical regime’s approach to women’s work. She said, “Women advocacy bodies have only focused on family issues and even if they pay attention to the economy, they see everything in household businesses, while this type of job is unsustainable and cannot lead to the empowerment of women in a desirable way.” [16]

What is the income of women in informal employment?

Mahnaz Ghadirzadeh, a labor relations expert, says, “Not only the peddlers we see every day on the subway or on the sidewalks of the city, but also a significant number of female white and blue-collar workers are also unemployed and cannot receive unemployment insurance. We know that many women work by agreement. Secretaries of doctors, service workers, and employees of private offices, etc.; in many cases they are paid less than one million Tomans ($41) and are not insured.” [17]

Tayyebeh Siavoshi, a former member of the regime’s parliament, said, “Unfortunately, many working women are willing to work in any environment, not subject to any law, even for 400,000 to 500,000 Tomans ($16.5 to $20.5) a month due to severe financial needs. Not only they do not enjoy any benefits or facilities, the employer can terminate these workers whenever he wants for any reason.” [18]

The clerical regime’s Labor Ministry has set the 2021 minimum wage at 4 million Tomans ($143), including every bonus or possible subsidy. [19]

Workers’ wages cover only 34% of their expenses. This means that a full-time working person who receives their full salary will finish it in the first ten days of the month. More than 14 million Iranian workers are preoccupied with surviving for a single day.” [20]

Working women have to endure the pressures of discriminatory laws and culture dominating the Iranian labor market. Additionally, the reality of women’s working conditions in Iran can only be compared to the conditions akin to slavery.

Mahnaz Ghadirzadeh, a labor relations expert and women’s rights activist, told the state-run ILNA news agency: “Women earn less than men systematically and within the framework of some laws. Women do not get benefits like child support, but apart from that, in some cases we see women being employed in jobs that in many ways do not get the minimum wages. Many female secretaries in offices and most female counter staff suffer from wage discrimination … In traditional jobs or small workshops, we find plenty of women who are paid less than men for the same work.” [21]  Most women live on an income of 300,000 to 400,000 Tomans a month. [22]

Qassem Sookhteh-sarai, head of the Golestan province’s agricultural union, said, “Iranian female farmers earn 60 percent compared to male wages, whether in the paddy fields, summer crops or market gardening products.” [23]  Production costs have risen in the agricultural sector and men do not accept lower wages and refuse to work, but women are in dire need of jobs for a variety of reasons, including poverty, so they are willing to work for much lower wages. Women’s wages are one-third of men’s.

Employers cut women’s salaries by one-third on the pretext that men are responsible for paying their household expenses. This is an injustice to the women heads of households most of whom are daily wage earners and do not have insurance. [24]

Forced labor as a family occupation

Despite the hours of rigorous work per day, many women do not receive any salary at all. In all villages and even in many cities, women carry the main burden of family jobs in addition to all household chores and childcare.

A paddy woman from Rasht, who has three children and has been producing rice in the paddy field with her husband for the past 25 years, told ISNA: “I have been engaged in the patty fields since I was a child and I have never been paid for it.”

“The hard work that paddy women put on their farms is not added to the cost of rice,” said another paddy woman.

“Our men go to coffee shops after harvesting rice, but rural women do not finish their work after harvesting. Besides taking care of household chores, they also must take care of livestock and poultry, and produce handicraft products to sell” said a rice farmer from Fooman.[25]

[5] The poverty line of every Iranian is 1.2 million Tomans; one out of every three Iranians is below the poverty line! – The state-run Tejaratnews website, 31 August 2021

[7] The National Statistics Center of Iran, Abstract of the results of the labor force survey, Spring 2021

[8] The Coronavirus impact on women’s employment 9 times more than men – the official website of the presidential directorate of Women and Family affairs, May 15, 2021

[11] No one thinks of women during the pandemic; 3 million women earn living in informal economy, the state-run ILNA news agency, March 8, 2020

[13] No one thinks of women during the pandemic; 3 million women earn living in informal economy, the state-run ILNA news agency, March 8, 2020

[15] No one thinks of women during the pandemic; 3 million women earn living in informal economy, the state-run ILNA news agency, March 8, 2020

[18] The official website of the Directorate on Women and Family Affairs, May 1, 2019 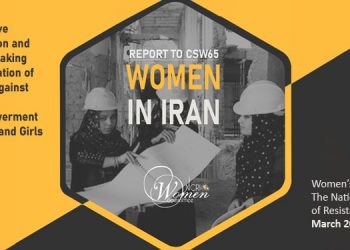