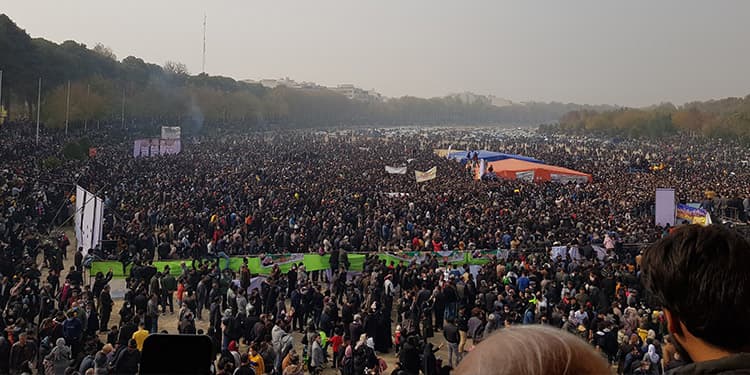 Tens of thousands join the farmers of Isfahan, demanding their water share

Tens of thousands of people joined the farmers of Isfahan on the 12th day of a sit-in protest on Friday, November 19, 2021. The farmers have been demanding their water share from the clerical regime.

The mullahs’ mismanagement of Iran’s rivers and water has led to the destruction of agriculture and livestock. Isfahan’s situation is particularly drastic where the watery Zayanderud river has dried up.

Zayanderud used to be the largest river on the Iranian plateau.

The protesters covered a large area of the Zayanderud River bed. Thousands of women were among the protesters. They stridently chanted among others, “Guns, tanks (are useless), Mullahs must get lost,” “Neither Gaza nor Lebanon, my life only for Iran,” “If the water does not flow, Isfahan will rise,” “Our enemy is right here, they lie it’s America,” “Beware of call by farmers to rebellion.”

Fearing the spread of the protest to other parts of Isfahan and Iran, the clerical regime shut down the internet to prevent dissemination of the images of this extensive demonstration in support of the farmers of Isfahan.