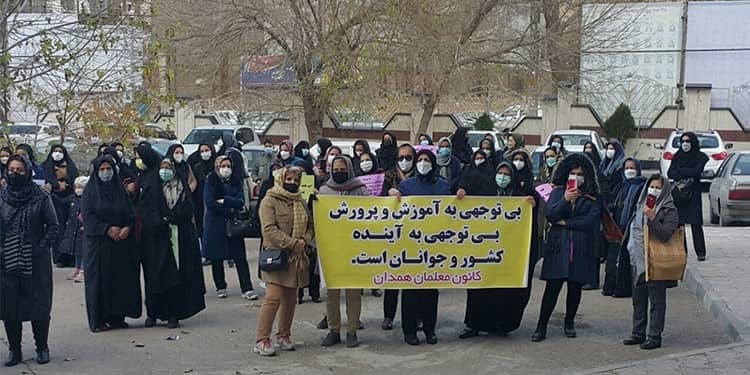 Women were remarkably active in the teachers’ nationwide protests in Iran.

The freedom-loving teachers of Iran held a nationwide protest on Thursday, December 2, 2021. Sixty-six cities in 28 provinces saw the teachers’ protests against their deplorable living conditions, low salaries, and high prices. They also decried the clerical regime’s disregard for their legitimate demands. They vowed not to relent until they obtain their rights.

Women’s presence was widespread in most cities during the teachers’ nationwide protests; they often led the chants.

In Tehran, Iranian teachers held their demonstration outside the mullahs’ parliament, Majlis.

In some cities, the protesting teachers carried photos of the victims of the November 2019 uprising.

The State Security Force (SSF) attacked the protesters in Tehran and tore down their pictures. The SSF also prevented filming of the protests. They violently arrested several teachers.

In Mashhad, the security forces used violence to disperse the teachers.

In Gorgan, teachers patched on the eye in solidarity with Isfahan protesters who were shot in the eye by the SSF and Revolutionary Guards (IRGC), last Friday.

In some cities, including Ardabil, teachers held their protest despite freezing weather and snow.

In Isfahan, women chanted, “Teachers rise up and eliminate discrimination.”

In Rasht, they chanted, “Imprisoned teachers must be released!”

In Tabriz, they chanted, “Teachers are awake, and outraged by discrimination.”

The Iranian teachers’ nationwide protests geared up in September to obtain their legitimate demands for decent salaries and living conditions. Most teachers have very difficult livings with salaries that are one-fourth or one-third of the poverty line.