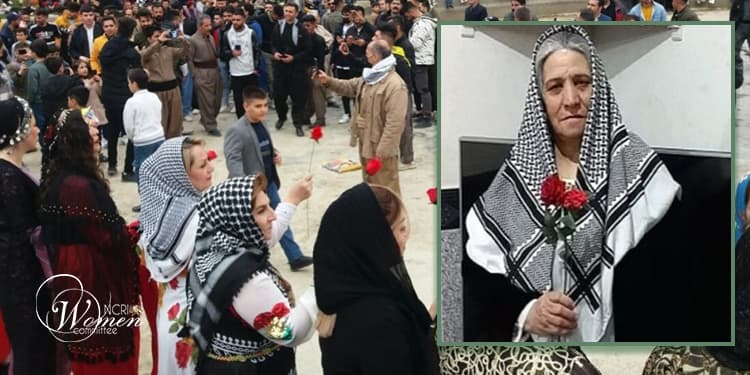 The Iranian regime’s security services ordered the illegal detention of Khadijeh Seifpanahi and her son Khaled at home.

The illegal detention of the elderly mother and son has continued for eight days now, since March 19, 2022.

The security services have threatened Mrs. Seifpanahi and her son and told them not to leave home until further notice, particularly to participate in the special Nowruz ceremony.

Khadijeh Seifpanahi is the mother of Hamed Seifpanahi, who was killed by security forces in an armed clash in Sanandaj in July 2017. Ramin Hossein Panahi was also taken prisoner in that conflict and executed on September 8, 2018.

Mrs. Khadijeh Seifpanahi has been illegally detained because she took an active part in last year’s Nowruz celebrations in Sanandaj. While holding a red rose, she called on the Kurdish parties to stand in solidarity to fight against the regime. Her action was warmly supported by the participants. For this reason, the Revolutionary Guards (IRGC) issued a circular banning the use of red roses in the Nowruz ceremony, this year.

The IRGC also summoned and intimidated hundreds of Kurdish activists in various cities. Dozens of people were arrested during the Nowruz ceremony, which was held on Monday, March 21, 2022, in the Children’s Park of Sanandaj. In this ceremony, Dayeh Sharifeh, the mother of Ramin Hossein Panahi, distributed red roses among the people.

Among those detained were several women, including Tahereh Shemshaki, Batool Azami, 75, and Ariana Salimi, 14, who were released after giving a written pledge.