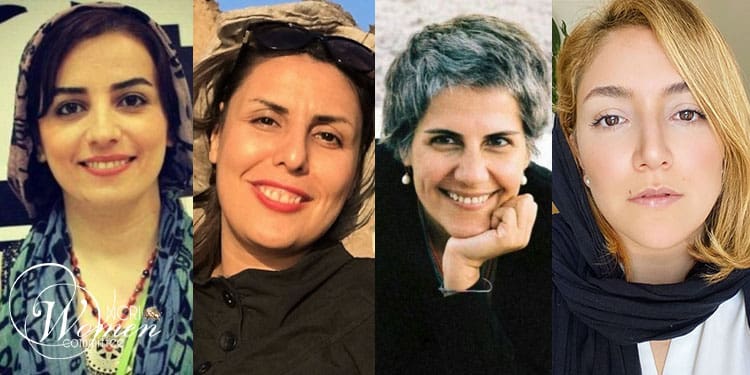 Iranian intelligence services arbitrarily arrested four women documentary filmmakers and photographers in Tehran on May 9 and 10, 2022.

Firoozeh Khosravani, a documentary filmmaker and director, living in Tehran, was arrested by intelligence agents in Tehran on Monday, May 9, 2022. During a telephone call with her family, Ms. Khosravani told them that she was in the Ministry of Intelligence Detention Center, Ward 209 of Evin Prison.

Firoozeh Khosravani is an art graduate of the Berra Academy of Fine Arts in Italy and has a master’s degree in journalism. In 2020, Khosravani won the best feature-length documentary, “Radiography of a family.” She also won the Amsterdam International Documentary Film Festival prize for the creative use of archives. Firoozeh Khosravani had been arrested in 2009 for laying flowers on the graves of the victims of the 2009 uprising in Tehran’s Behesht Zahra Cemetery but was released a few hours later.

On the same day, May 9, intelligence services arrested another documentary filmmaker, Mina Keshavarz, in Tehran. They took her to an unknown location after a thorough search of her home.

Mina Keshavarz, born in 1984, has made six documentaries so far. Her latest documentary, “The Art of Living in Danger,” was about victims of domestic violence.

An informed source reported that on May 10, nine security agents raided the home of Shilan Saadi, a Kurdish documentary filmmaker, searched her home, and took her away.

Born in 1980 and Shilan Saadi has 15 years of experience in filmmaking. In 2019, Shilan Saadi, with a documentary called “I Promised” about seven Yazidi women in a Turkish refugee camp, and Mina Keshavarz, with a film about women who were accepted at the Berlinale Festival.

Tehran’s District 33 Prosecutor’s Office oversaw the arrests of all the above individuals.

The Iranian intelligence services arrested Reyhaneh Taravati, a photographer and camerawoman, on May 9, 2022, and took her to an unknown location.

Ms. Taravati had been arrested in 2014 for publishing an Iranian version of the Happy Song with a group. She was released a few weeks later. A court sentenced her to one year in prison, suspended for three years.

Re-arrest of a labor activist

The Intelligence Ministry forces raided the residence of Anisha Assadollahi, a labor activist, in Tehran on May 9, 2022, and arrested her.

Anisha Assadollahi was among a group of labor activists, including 15 women, arrested after being beaten on May 1, 2019, during an International Workers’ Day demonstration. Some were transferred to the Ministry of Intelligence Detention Center in Evin Prison, Ward 209. Some women were transferred to Qarchak (Shahr-e Rey) Prison in Varamin.

She was later arrested and imprisoned again on June 18, 2019, by 12 intelligence agents on the street in Tehran.