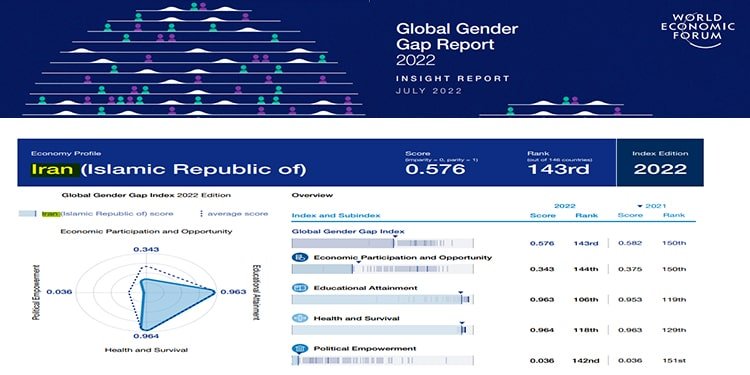 The World Economic Forum has published the 2022 Global Gender Gap Report. Iran, under the clerical regime, is at the bottom of the gender gap index, ranking 143 among 146 countries studied.

The main reason for the abysmal ranking is the lack of equal opportunities for women under the mullahs’ misogynous regime.

Iceland has the highest world ranking in closing the gender gap.

The 2022 Global Gender Gap Report stresses, “Accelerating parity must be a core part of the public and private agenda.”

Based on this report, Iran has one of the lowest estimated earned incomes for women, and labour-force participation regressed significantly in Iran.

The impact of the gender gap on women

Under the title, “Gender Gaps in the workforce: an emergency crisis,” the Global Gender Gap Report 2022 states:

Gender gaps in the workforce are driven and affected by many factors, including long-standing structural barriers, socioeconomic and technological transformation, as well as economic shocks.

More women have been moving into paid work and, increasingly, leadership positions, yet globally societal expectations, employer policies, the legal environment and the availability of care continue to play an important role in the choice of educational tracks and career trajectories. The decade of austerity that followed the 2008 Global Financial Crisis constrained sectors that provide the core of social infrastructure, affecting outcomes for families and primary caregivers – often women – during the pandemic. Geopolitical conflict and climate change both impact women disproportionately. In addition, the projected deepening of the current cost-of-living crisis is also likely to impact women more severely than men, as women continue to earn and accumulate wealth at lower levels.

Under the clerical regime, Iran scores 0.375 on Economic Participation and Opportunity and a minuscule 0.036 on Political Empowerment of women.

It should be noted that the World Economic Forum ranks countries based on their official statistics. Due to the non-transparency of the mullahs’ regime in publishing actual statistics, even this category does not reflect the real situation of women in Iran and their deprivation of equal opportunities and participation.

The misogynous clerical regime’s CSW membership is a disgrace that the international community needs to strongly condemn Membership of the mullahs’ misogynous religious fascism in the UN Commission... 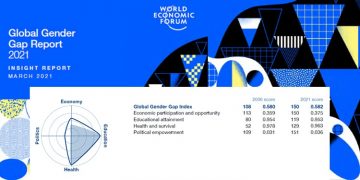 A whopping gender gap in Iran and a lack of women’s access to equal opportunities. The World Economic Forum’s Global Gender Gap Report 2021 was published on March...