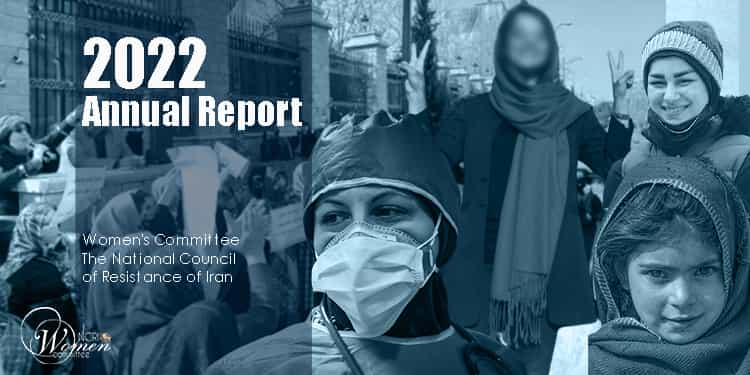 On the eve of International Women’s Day, the NCRI Women’s Committee publishes its Annual Report 2022, reviewing the past year as Iranian women lead the fight for freedom and equality in Iran.

The recent beheading of Mona Heydari, a child bride, shocked the world. The heartless murder of this 17-year-old mother by her husband was the culmination of an incessant wave of honor killings and femicides in Iran over the past few years.

The tragic incident failed to bring any sense of urgency to the mullahs’ parliament for the long-overdue passage of the bill on violence against women. No surprise that the regime’s supreme leader and officials did not utter even a word to condemn the beastly murderer. The root cause of these inhuman and misogynistic crimes lies within the clerical regime, which has institutionalized and promoted savagery throughout the years.

The past year also saw a marked surge in the executions of women under Ebrahim Raisi. The executions of seven women in the span of just one month set a new record for this mass murderer and henchman of the 1988 massacre.

The Iranian regime did not take any action to benefit or empower women. Instead, they passed bills and took steps, which served their policy of marginalizing women and eliminating their few remaining rights.

However, there is a bright side to all these bleak realities. The brave, resilient, and defiant women of Iran did not succumb to the misery of life under the mullahs’ religious fascism.

In contrast to the mullahs’ wish to isolate them at home and keep them busy with raising children, Iranian women took to the streets at every opportunity and raised their voices against the clerical regime’s oppression. They even took their children with them to round-the-clock sit-ins in the streets.

Mothers whose children were killed by security forces during the uprisings have been outspoken all along, seeking justice for their loved ones, fearing no arrest, imprisonment, or torture.

As opposed to the institutionalized discrimination, that deprives them of political participation and decision-making, Iranian women took the lead in virtually every protest, strike, and demonstration to play their role in deciding their country’s fate. They formed their Resistance Units and spearheaded the uprisings. Their role is instrumental in breaking the chains of repression.

Whenever they face arrest and detention, Iran’s brave women willingly pay the price of freedom. They do not give up their mission of promoting hope and keep encouraging active opposition to the regime even from behind bars.

As Iranian women lead the fight for freedom and equality, they count on the support of their sisters from around the world in this quest.

The present report is an effort to bring to light the various aspects of life and struggle of Iranian women since March 2021.