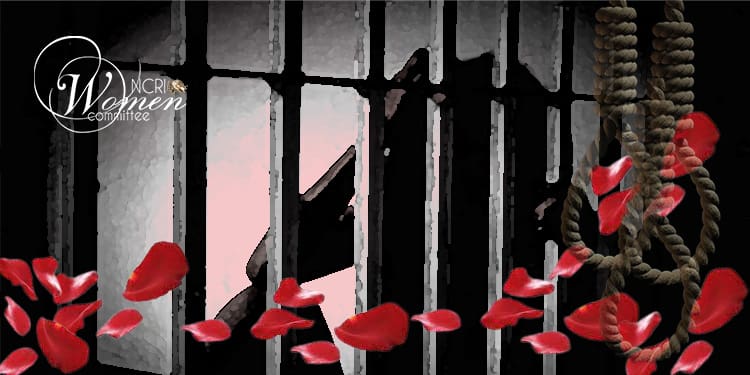 Her name was Shamsi Barari, and she had a sweet Turkish accent. She was from Zanjan, a city in northwest Iran. I saw her in the summer of 1982 when I entered the prison. She was walking slowly. She glanced at me with her beautiful, round, black eyes. It was like I had known her for years. She was a simple and kindhearted woman. She told me she had two children, a girl and a boy who were now left to live on their own. She told me it was almost a year she had been arrested for aiding the People’s Mojahedin Organization of Iran (PMOI).

Her husband, two sisters and one brother had also been arrested for the same reason. The whole time I was with her, she was worried about her children. Well, nobody could blame her because they were like strangers in Mashhad, where their mother was captive.

She said, ‘put yourself in my place. A 13- and 14-year-old girl and boy alone in this city where there is no security.’ She could not sleep and had no appetite, so she paced all the time. I would tell her funny jokes to try change her mood. She waited for visiting days the entire week so she could see her children. They would come in a hurry every visit, and she was eager and worried at the same time. Some weeks they were not able to make it. Shamsi would tell them, ‘It is alright, do not take it hard on yourselves. You have to travel far to get here, and the streets are crowded.’

What should not have happened, happened

It was mid-summer, and it was very hot. The pressures in prison were more intense than ever. One morning at visiting time, I saw Shamsi. She seemed frustrated as she wandered about. I asked her, ‘what is wrong?’ And told her not to worry, “your children are going to come, and if they do not, you need not worry; they are at home. You suffer enough in prison, do not upset yourself more.’

She said, ‘I had a bad dream last night, and I am worried.’ I said, ‘you are always worried, and this is nothing new.’ I laughed along with her to ease her distress. Group by group, the prisoners were sent to visit their families. Some prisoners did not have any visitors at all. Others would have occasional visitors coming from other cities. Some families did not know where their children were.

However, time passed, and no one came to visit Shamsi that day. Around noon, the prison officials called her name. She went to the security office. We were all terrified about what could have happened. They told her to get ready, that she would be released for a few hours. I could not understand why her face was so pale when she returned. She would not stop shaking. An officer brought her to pack her things. We were all worried and awaiting the news. Suddenly, I saw one of Shamsi’s sisters approaching. She was sobbing and hitting her head. We gathered around her and asked her why she was crying but she could not say a word. We calmed her down. Then she told us that that morning when Shamsi’s children were on their way to visit, her son Gholamreza was hit by a truck while crossing the street and died at the scene. Now Shamsi and her husband were taken by the official to bury him. They do not have any other family members to come help them. We were all left in shock.

Could this be possible? How could it be? I looked up to the sky and asked, ‘God, I know there must be a reason, but why?’ We were all so upset that we did not know how to comfort Shamsi when she came.

Sometimes the pain is so heavy that you cannot describe it. You cannot yell out, and you cannot remain silent! Those few hours seemed like days and weeks. I was thinking of Shamsi and how she was doing now. Who is comforting her? And in this faraway city, who is with her at the burial? She returned after 6 hours. She had aged several years in those few hours. You could not recognize her, and she kept crying. She said with her sweet Turkish accent that her husband had kissed Gholamreza and put him in the grave with his own hands. She pleaded for God to be their witness.

Everyone cried after hearing what had happened. We would usually cry under our blanket at night but this time our tears kept flowing. The female prison guard in our ward shouted, ‘Why have you started mourning? What is going on?’ The prisoners replied, ‘A 14-year-old boy was hit and killed by a truck!’ The non-political female prisoners in the next ward also showed sympathy and rebuked the female guard. We all gathered and organized a small funeral for Shamsi’s son with the least available facilities.

Shamsi Barari, amongst martyrs of the 1988 massacre

Days passed till our ward was separated and I lost contact with Shamsi. A prisoner told me that Shamsi had been temporary released after 2 years imprisonment.

Long after, I heard that Shamsi had been arrested again in 1986 for assisting the PMOI, and she was held in Mashhad’s prison until July 1988.

In mid-August, Shamsi and several other prisoners were summoned in the middle of the night. Former prisoners told me she had severe headaches and had taken medicine to help her sleep that night. But the prison guards dragged her brutally. She yelled and screamed at them to at least let her take her things and medicines, but the guards ignored her. They told her, ‘There is no need!’

They took her away, and we later found out that she was executed that very night along with her husband, Mustafa Mir-mohammadi, and her brother, Rasoul Barari.

Shamsi was in her mid-50’s at the time of her execution, and her husband Mustafa was 60 years old. I have never been able to accept her not being alive – I feel she is always present with me.