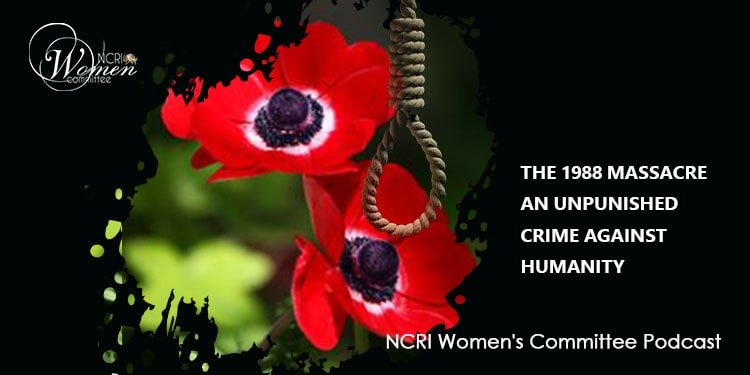 In Iran today, the perpetrators of crime against humanity are sitting at the highest levels of government. Ebrahim Raisi, the regime’s Deputy Prosecutor General at the time and one of the key members of the Death Commission ordering the massacre of 30,000 political prisoners in 1988, is now the regime’s president.

As Amnesty International Secretary-General said, “That Ebrahim Raisi has risen to the presidency instead of being investigated for the crimes against humanity of murder, enforced disappearance, and torture, is a grim reminder that impunity reigns supreme in Iran…”

The Iranian authorities’ systematic concealment of the fate of victims and the whereabouts of their bodies, amounts to ongoing crimes against humanity.

On the anniversary of the massacre of 30,000 political prisoners in Iran in the summer of 1988, we’re going to discuss how the genocide impacted Iranian women.

An unpunished crime against humanity

The mullahs’ supreme leader at the time, Khomeini, carried out the massacre of anyone with ties to the Iranian Opposition Movement, the People’s Mojahedin Organization of Iran (PMOI). In a despicable hand-written decree, he wrote, “Anyone who at any stage is insistent on their support for the PMOI is condemned to death.”

The vast majority of the victims were members and supporters of the PMOI/MEK.

Prisoners were hanged in groups of 10 to 15 at a time, and transported out of prison by dump trucks, and buried in unmarked mass graves. There was no mercy on anyone, even young girls and pregnant women.

Khomeini’s haste to execute was so abhorrent that many of his closest confidantes expressed doubts about it.

Based on testimonies of former political prisoners who somehow managed to escape their death, preparations for the massacre started in the fall of 1987 and winter of 1988 by classifying and segregating the prisoners.

By March 1988, it was still not clear to anyone why the prisoners were being classified and relocated from one prison to the other.

Although the prisoners had first-hand experience of torture and mistreatment by the prison guards, it did not occur to any of them that they might be massacred.

The massacre officially began on July 19, 1988. Many prisoners were moved from general wards to solitary confinement.

On July 27, 1988, it was announced that there will be no prison visits for two months and that the prisoners’ families should not come to see their children.

On the morning of July 28, 1988, the “Death Commission,” officially began its work in Evin Prison questioning the prisoners. Ebrahim Raisi the mullahs’ current president was a member of this commission.

The same happened in other prisons across the country. Based on the information collected by the Iranian Resistance, the massacre was carried out in at least 110 cities.

A crime against humanity and its impact on Iranian women

The available reports indicate that in most prisons, no one survived from the women’s wards.

One of the witnesses of the massacre in Tehran’s Evin Prison said, from the three wards that held around 250 women, only half a ward had survived who were mostly Marxists.

Another survivor said from the female prisoners confined in five closed-door rooms in Evin, only one had survived.

So, there is very little information left on the number and identities of women and how they were executed during the 1988 massacre. But there is some information which I can share with you.

The first series of women were executed on July 20, 1988. On that day, according to reliable information, at least five female prisoners were moved out from Ilam Prison. Ilam province lies by the central western Iranian borders. Later, it was found that the five women had been taken to a hilltop and executed by firing squads.

There are other reports from Evin Prison, in Tehran. This information says that prison authorities summoned about 24 female prisoners from ward 2 on July 27, 1988, to be questioned. More women were called from ward 3.

The prisoners returned a few hours later and said that they had been asked repeated questions about their political positions and the duration of their prison time. They mentioned seeing an automatic rifle installed right across from the door.

At 11 p.m., the names of four female prisoners were announced from the ward’s loudspeaker and guards subsequently came for them.

At midnight, more prisoners were taken away from solitary confinement. Nobody knew what was going on yet, but they never came back!

The Call for Justice Movement

The Call for Justice Movement will continue its efforts in search of justice for the masterminds and perpetrators of the 1988 massacre in Iran.

Just recently, the movement earned a victory in Sweden where the court handed down a life sentence for Hamid Noury, one of the perpetrators of the massacre. The Iranian Resistance and the NCRI have vowed to continue until Khamenei, Raisi and other officials of the regime face justice.

The world should recognize the 1988 massacre in Iran as a crime against humanity and a genocide.

Women in the families of porters – "A bite of bread at the cost of life!"