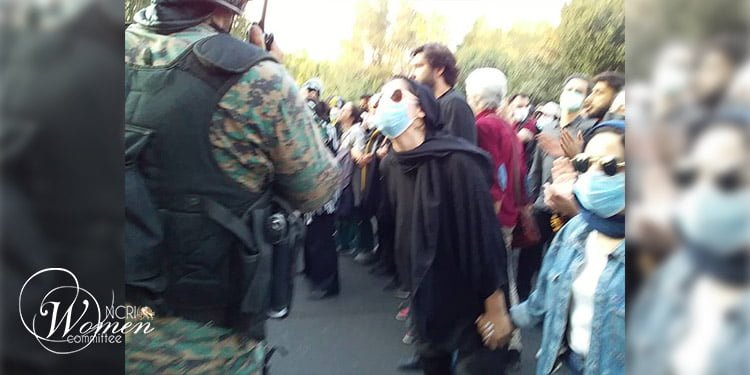 A woman in Tehran confronts a security force

Courage looks like a woman who won’t stand down!

Iran is rocked with protests after the heinous murder of Mahsa Amini.

The people and youths of Tehran came to the streets on Monday, September 19, 2022, protesting the security forces’ brutal suppression of women and calling for “Death to Khamenei!” Keshavarz Blvd. in downtown Tehran was under people’s control. Women widely participated in the protests over the heinous murder of Mahsa Amini.

Women were boldly at the forefront, not only leading the chants but fighting the repressive forces and standing up to the anti-riot forces. They chanted, “Every one of us is a Mahsa; Fight and we fight back!” and “We fight, we die, we’ll take back Iran!”

People set fire to the security forces’ motorcycles and arms, turned over the SSF vehicles, broke their windows, and drove back the water cannon vehicle. They also confronted the repressive forces in self-defense.

Protests continued in Kurdistan. Divandarreh joined the protests on Monday, September 19, 2022. The State Security Force showed a heavy-handed reaction to the protesters, opening barrages of fire on them. The people and youths of Divandarreh, however, bravely confronted the security forces and the battles which started in the early morning continued to the night as this report is being published.

In addition, shop owners in the markets of Saqqez, Mahabad, Sanandaj, Oshnavieh, Bukan, Marivan, Baneh, Sardasht, Piranshahr, Urmia, Kamyaran, Paveh, Divandarreh, and Javanrud also closed their shops and went on strike. Local authorities had threatened merchants to seal their businesses in case they join the strike. The brave business owners, however, chose to disregard the warning.

People held protests in the above cities. Security forces opened fire on protesters in Saqqez, Sanandaj, and Divandarreh and used tear gas. People confronted them by hurling stones. Seven women were wounded during the protests in Saqqez. A 10-year-old girl was severely wounded in Bukan. Four teenagers under 18 were wounded in Mahabad.

The general strike follows the regime’s severe crackdown on peaceful protests by locals in Sanandaj on Sunday night. Reports from local sources say dozens of protesters were injured as the regime’s forces opened fire. Some reports claim four protesters were severely injured and transferred to Tabriz in northwest Iran to receive medical treatment.

In all the cities, people braved all odds and stood up to the regime’s repressive forces.

Mrs. Maryam Rajavi, the President-elect of the National Council of Resistance of Iran (NCRI), offered her deepest sympathies to Mahsa Amini’s family yesterday and called for public mourning.

She urged Iranian women to hold nationwide protests against the mullahs’ misogynous and evil regime and called for the dismantling of the Guidance Patrol. “The resistant and resilient women of Iran will stand up to the tyranny and oppression of the mullahs and the IRGC and defeat them. Iranian people and women will fight back with all their might,” she added.

The young Kurdish woman, Mahsa Amini, was arrested on Tuesday evening, September 13, as she and her brother were exiting the Haqqani metro station.

Women who had also been arrested and were riding the same van as Mahsa Amini said that she had been beaten in the car. When they arrived at the Vozara detention center she was in poor condition but still conscious. The agents at the detention center, however, ignored her condition. The protest of other detainees demanding attention for Mahsa was met with violence.

The doctors and staff of Kasra Hospital said Mahsa Amini had no sign of life and was brain dead when she arrived at the hospital. The CT Scan images leaked from the hospital show that Mahsa Amini had been directly hit in the head, and had suffered brain hemorrhage and death.