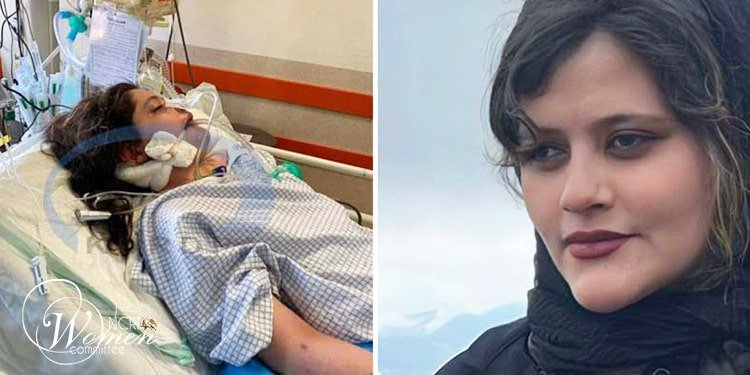 Zhina Amini (Mahsa) went into a coma after being batoned by the Guidance Patrol. The level of consciousness of this 22-year-old girl has reached 3. Doctors have given up hope on her.

Zhina Amini and her brother Kiaresh (Ashkan) were attacked and beaten by the guidance patrol on September 14, 2022, as they entered the Haqqani metro station in Tehran.

Zhina Amini suffered a concussion after a few hours in Vozara Detention Center due to severe beating and injuries. She was transferred to Tehran’s Kasra Hospital.

According to Kurdish human rights sources, by midnight on Wednesday, September 14, the doctors declared the condition of Zhina Amini to be very serious, and her level of consciousness was 3.

Doctors also gave up hope of improving the condition of Zhina Amini. According to their diagnosis, she had a heart attack and brain death.

Kasra Hospital is entirely under the control of police forces and intelligence agents. Zhina Amini’s parents were with their daughter in the hospital.

The intelligence service threatened the family of Zhina Amini (Mahsa) that they were not allowed to interview foreign media; otherwise, they would face problems.

Kiarash Amini,  Zhina’s brother, was severely beaten by the Guidance patrols when his sister was arrested. The intelligence service also threatened that he did not have the right to interview the media.

Zhina Amini (Mahsa) from Saqqez came to Tehran from Sanandaj with her family for a leisure trip. She was arrested on Tuesday night at the entrance of Haqqani highway by the Guidance patrol forces.

Kiarash Amini: I ran to the Kasra Hospital

Mahsa’s brother, Kiarash, resisted his sister’s arrest, and the officers also violently treated him. He managed to free himself from the officers. They told him they would take his sister to the Moral Security Police on Vozara Avenue and release her after an hour of “education class”!

Kiarash said, “When I arrived in front of the building, about 60-70 people had brought clothes for their detained girls, waiting there. When a few young women were freed, suddenly, there was a scream. We were all banging on the building door and climbed up the door. But they did not open the door. At one point, officers came out with tear gas and batons and attacked us. My whole body is bruised. My eyes have been burning since last night. “Five minutes later, an ambulance left the building.”

Kiarash continued angrily: “Every girl who came out said, ‘Someone was killed.’ I showed Mahsa’s photo to the girls. One said Mahsa was in her arms when she had a problem. I was shocked and scared. I asked a soldier what happened. He said one of our soldiers was wounded. They lied. Mahsa was in that ambulance. I didn’t believe it. I ran to the Kasra Hospital.”

Just two hours after the arrest, the doctors at the Kasra Hospital announced the brain death of Zhina Amini by announcing the diagnosis of simultaneous heart attack and brain stroke.

Mahsa’s brother emphasized that although they did not allow him to film his sister, he saw with his own eyes that Mahsa’s face was swollen and her legs were bruised.

The state-run Khabaronline.ir wrote: “According to Kiarash, brother of Zhina Amini, it took only two hours from Mahsa’s arrest to find her in a coma.” (September 15, 2022)

The state-run newspaper, Sobh-e Ma, also wrote on the same day: “A young woman is being treated at Kasra Hospital in Tehran due to the severity of her injuries and severe brain damage after a conflict with the Guidance Patrol.”

I will continue to pursue my complaint

“I will continue to pursue my complaint,” said Kiarash Amini, brother of Zhina Amini. When he went to the prosecutor’s office, they gave him a letter that he should go to the Vozara building, the same place where his sister was killed! Kiarash said, “I will not let this story end in silence. I will spread this news throughout Iran and will pursue my complaint.”

He said with pain and anger, “I have nothing left to lose.”

Guidance patrol or the killer of Iranian women

The hallmarks of Ebrahim Raisi’s presidency have been a spree of executions and the brutal suppression of women.

On July 5, Raisi ordered the re-implementation of a plan called “Strategies to spread the culture of chastity,” adopted in 2005 by the Supreme Council of Cultural Revolution to enforce the compulsory veil. So, the clampdown on women took an unprecedented height in early July, affecting all areas of the life of Iran’s freedom-loving women.

The vice patrols’ treatment of Iran’s freedom-loving women has been so harsh and inhumane that even the regime officials were forced to speak up.

The suppression of women went so far as to extract forced confessions from opponents of the compulsory Hijab and broadcast them on state TV. It proves that the fate of the mullahs’ regime is tied to women’s freedoms that pose an existential threat to the clerical regime.

The savage beating and brain death of Zhina Amini (Mahsa) is yet another manifestation of violence and brutality against the free women of Iran.