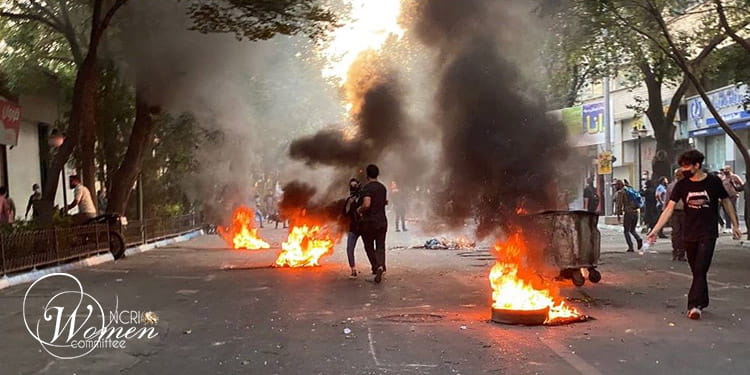 Iranian cities continued to rise on Wednesday, September 21, 2022, the 6th day of nationwide protests over the clerical regime’s brutality and the killing of Mahsa Amini.

At least 86 cities have launched anti-regime protests in 28 of the 31 provinces of Iran.

Young women and girls have a high fighting spirit. Their voices can be heard in all footage sent from the four corners of Iran. Their active participation can be seen in most.

Fierce confrontations on the 6th day of nationwide protests

On the 6th day of nationwide demonstrations, Iran saw extreme resistance on the part of the Iranian people, youths, and women.

In addition to forceful marches and fiery chants against the clerical regime and its supreme leader, protesters clashed with the intelligence and security forces and plainclothes agents in virtually all cities.

Youths confiscated, overturned, or torched the security forces’ vans, cars, motorcycles, and kiosks. In several instances, they managed to help free the young people being arrested.

In Amol, people took over and set fire to the Governor’s Office.

In many cities, they tore down or burnt the large banners bearing the images of Khomeini, Khamenei, and Qassem Soleimani.

With their solidarity and united cooperation, the demonstrators drove back the State Security forces and compelled them to flee.

In many instances, they reciprocated the repressive forces’ beatings.

In Urmia, during the burial ceremony Farjad Darvish, killed during the protests, people chanted, “Death to Khamenei” and “death to the dictator.”

Chants of “Death to the oppressor, be it the Shah or the (mullahs’ supreme) leader” resonated in all cities.

Tehran University students held a protest and marched on campus for the fourth consecutive day. At Allameh University, students marched indoors, calling on fellow students to join in.

Students also marched at the Medical School of Tabriz and Azad University, the science and research branch.

Security forces are incredibly violent and brutal while arresting the protesters. Unconfirmed reports from Kurdistan say the regime is killing on the scale of genocide. Hundreds have been wounded and hundreds more arrested and detained, including many women.

The state-run Mehr News Agency published an interview on Wednesday, September 21, 2022, with IRGC Col. Heydari, commander of the Women’s Special Units of the State Security Force.

Heydari pointed out that for the first time, the SSF Special Units were deploying female forces to rein in the unrest. “For the first time, we witnessed the presence of women among the crowd of individuals who disrupt the public order and security. Some of these women are leaders. In addition to publicity, they chanted slogans that broke the norms. It was agreed that we deploy the women’s unit to arrest the women who disrupt the public order and security.”

Heydari added, “We have so far arrested eight female leaders.”

Iran’s brave women fight the clerical regime’s repressive forces hand in hand with men. Their struggle is not only for women’s rights and freedoms, including the freedom of choice regarding their dress but for fundamental freedoms and rights for all Iranian citizens and a free Iran based on justice and gender equality.

Iranian protesters chant slogans, denouncing the regime’s corruption and injustice for 44 years and calling for an end to the mullahs’ rule and the downfall of Ali Khamenei, the mullahs’ supreme leader.

Solidarity is stronger than the regime’s repression and terror

In her message to the people of Iran, the NCRI President-elect Maryam Rajavi said:

Iran’s high-spirited, freedom-loving women and girls are at the forefront, chanting “Death to Khamenei.” In step with men, they drive back the IRGC mercenaries, thus promising a democratically elected republic based on gender equality and national sovereignty.

In the struggle to overthrow the religious dictatorship and establish democracy and popular sovereignty in Iran, the solidarity among different sectors– students, teachers, educators, farmers, and workers– is 1,000 times stronger than Khamenei’s repression and terror.