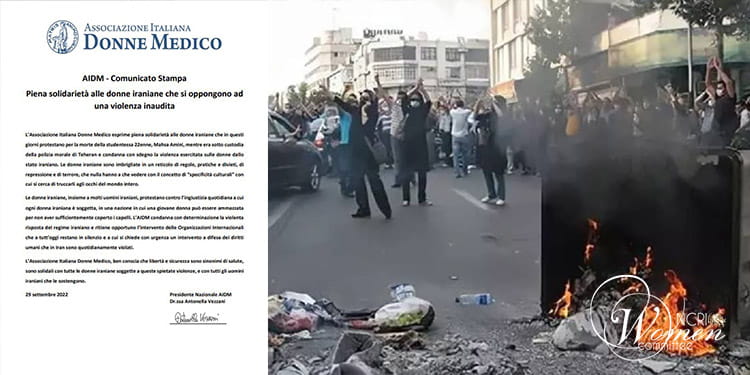 The Italian Association of Women Doctors announced its full support and solidarity with Iranian women in a statement. The text of the statement is as follows:

The Italian Association of Women Doctors declares its full solidarity with Iranian women.

The protests these days are against the death of Mahsa Amini, a 22-year-old student who was killed in the custody of Tehran’s morality police. We condemn the violence against women and their humiliation.

The Iranian government has trapped Iranian women in a network of laws, practices, and prohibitions.

Repression and terror have nothing to do with the concept of “cultural identity”, but the Iranian regime is trying to project them in the eyes of the whole world.

Iranian women, along with many Iranian men, are protesting the daily injustice they face.

Every Iranian woman is subject to the rule that a young woman can be killed for not fully covering her hair.

The Italian Association of Women Doctors AIDM strongly condemns the violent response of the Iranian regime.

It urges international organizations to intervene, those who have remained silent until today, and they are asked to immediately defend the human rights that are being violated every day in Iran.

The Italian Association of Women Doctors knows very well that freedom and safety are synonymous with health.