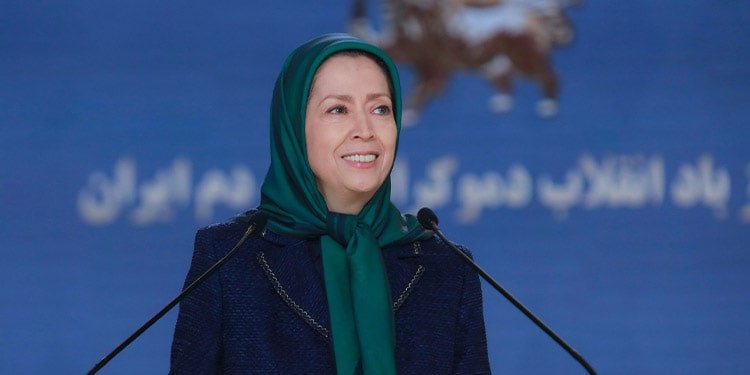 Hope and continuing the fight is key to victory

Women, the force for change, and vanguards of uprisings, Maryam Rajavi’s speech in tribute to the Iranian people’s nationwide uprising, September 30, 2022.

Our gathering today is to pay tribute to the bravery of Iranian protesters, women, and youths, and pay homage to the martyrs of the Iranian people’s nationwide uprising.

In the beginning, we honor the memory of the heroic martyrs of the September 27, 1981, uprising, whose memories we will remember forever.

We hail the rebellious cities in the Iranian people’s nationwide uprising, from north to south, and from east to west. From Azerbaijan and Kurdistan to Qeshm Island, Behbahan, Zahedan, Mashhad, Bojnourd, Ardabil, Tabriz, Chabahar, and to the Greater Tehran.

And we salute the heroic people of Amol who have terrified the repressive forces by setting fire to the governor’s building and the police station, forcing the anti-riot forces to retreat. Of course, to advance the uprising, they paid a heavy price: 18 martyrs.

The Iranian people’s nationwide uprising has advanced to this day, with more than 12,000 arrests and hundreds of martyrs. From the blood of these martyrs, tulips have blossomed all over Iran.

And a word with you, the rebellious generation, who have come to the streets to dismantle religious fascism.

You, the heroic young women, who command the protests on the ground, and you, the Resistance Units, and combatants of the Iranian people’s democratic revolution!

You have shaken the enemy to the core in the front line of the showdown with the people of Iran in all provinces.

In your powerful uprising, you have taken a victorious stride towards the regime’s final overthrow, and the people of Iran are with you in this uprising.

You, the rebellious and fighting force have gone from defense into an offense against the repressive forces.

For several days now, you have had no sleep, no comfort, and not enough food. But you have not tired. You have become more combative, and you have exhausted the enemy.

Greetings and congratulations to you, courageous youths and Resistance Units, who wrote and declared that you want to continue with all your strength and by giving your life. Because of your bravery and sacrifice, the herds of Revolutionary Guards and the State Security Force are terrified when they see you and start running away.

The mullahs’ Supreme Leader wanted to block the path of protests by bringing into office Ebrahim Raisi, the murderer of the People’s Mojahedin, and by tightening the repression. But you blocked his way with an uprising even bigger than the previous ones.

Beset by uprisings, the mullahs are truly helpless and without a solution. At the same time, you are more powerful, more aggressive, and more united than ever.

Women, the force for change, and vanguards of uprisings

And today, I address you women and girls, the vanguards of the battalions of uprisings and revolution.

In the ranks of Resistance Units, you have suffered very much and sacrificed a lot to keep the flame of uprisings burning.

Your bravery is widely admired. Everyone can see that in many places you cover your faces, run agile in all directions, and encourage others to advance and launch attacks.

You are no longer fearful in the battlefield and are charging forward aggressively. You have shown that your choice and determination for freedom are a thousand times more powerful than the mullahs’ repression and killing.

Your voice is a call for the regime’s final overthrow through a rebellion.

The world has heard your voice and has seen that you have initiated and instigated the uprisings.

You, the daughters of the rebellion and revolution, have stood up to and repelled the Revolutionary Guards, the repressive forces and their snipers.

You were not intimidated by the enemy’s crackdown and terror, by the lack of means to defend yourselves in the face of the regime’s savage forces. And you launched attacks with your bare hands against the enemy, such that they still fear you in their hearts.

But no, you are not empty-handed. The experience of four decades of blood-drenched struggle by the nation’s Mojahed and combatant children backs you up.

You are the continuation of four decades of struggle, rebellion, and defiance of Iranian women for freedom and equality. Your battles today are an extension of the sacrifices of tens of thousands of Mojahed women who were tortured or executed by this regime; yes, they planted the seeds of your generation.

A thousand leading women, who have today formed the Central Council of the People’s Mojahedin Organization of Iran and have shouldered the responsibility of advancing a revolutionary movement, provide you with strong and steadfast support in the fight for freedom.

Many years ago, I addressed the mullahs’ religious dictatorship and said, “You have used all possible forms of humiliation, oppression, repression, torture, and murder against Iranian women. But be sure you will receive the fatal blow from those you never count.”

Yes, our message has always been and remains that women are the force for change. And the women of Iran will eventually bring down the religious dictatorship.

Today, the arisen women of Iran attest to this truth with their blood.

From Mahsa Amini, the innocent Kurdish girl, to the martyrs of the uprising, Minoo Majidi, Ghazaleh Chalavi, and Hannaneh Kia, who laid down their lives for freedom just in recent days. Yes, all of them are witnesses to the unwavering resolve of Iranian women and girls, and the courageous youths, to bring down this misogynistic tyranny.

Now – as Massoud [Rajavi, the Iranian Resistance Leader], has said: “To the moribund Khamenei, who benefitted for two years from the Coronavirus, we must say that God is the same God who brought down the Shah’s regime in 1979. Today, He is acting through the heroic people of Iran and their freedom-loving youths to put an end to the religious dictatorship, once and for all. The new democratic revolution in Iran will be victorious.”

You lack nothing to fight and win.

You have the experiences and backing of four decades of resistance and struggle of the pioneers of struggle against two dictatorships; you are relying on the sacrifice of 120,000 of the best children of this homeland and 30,000 victims of the 1988 massacre.

You have with you the hope and faith of Mojahed men who have rebelled against the world of patriarchy, egoism, and self-interest, and sacrificed everything for the freedom of their people.

Expansion of nationwide strikes as the uprising goes on

I call on all social sectors and professions throughout Iran, teachers and educators, university professors, workers, farmers, bazaar merchants, oil workers, high school and university students, nurses, and doctors, to contribute to the continuation of the uprising by staging nationwide strikes.

The uprising has spread to hundreds of cities across Iran and cannot be contained by brutal suppression and shutting down the Internet.

The situation will never go back. The regime has received severe blows, and its mercenaries are disillusioned, worn out, and fragile.

To all the people of Iran, men, and women, I say:

Believe that you are capable of doing a thousand things. Every step and every help on your part, however small, generates a great force against which the mullahs cannot stand.

Keep the doors of your homes open to courageous youths.

And hold protests and demand the release of the young people detained by the regime during the uprising.

Hope and continuing the fight is key to victory. We can and must overthrow the clerical regime and its various factions despite its levers of repression. We can and must bring freedom, democracy, and equality to Iran.

Hail to the martyrs