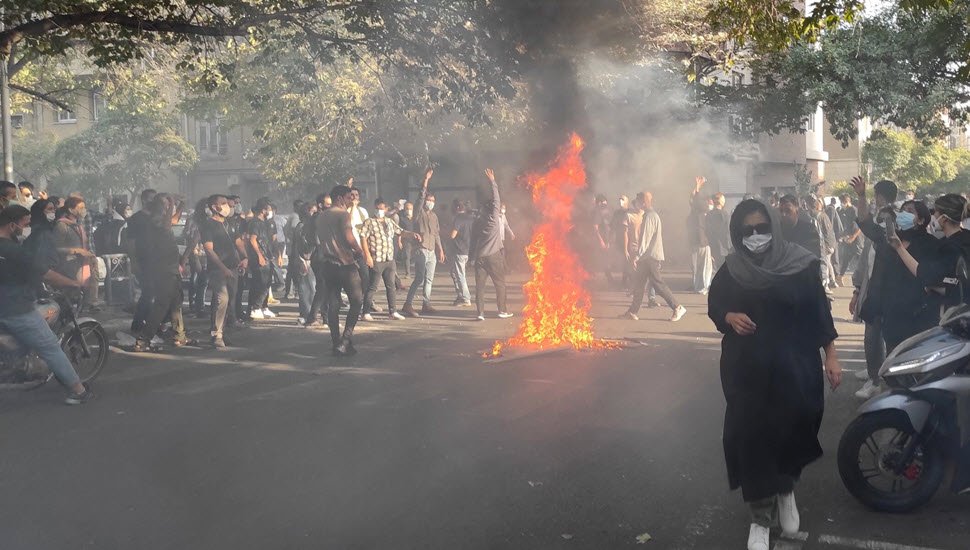 All-woman Al-Zahra University students lash out at Raisi upon his visit.

Iran protests continued for the 23rd consecutive day on Saturday, October 8, 2022. Despite ruthless crackdowns and widespread arrests, the protests have spread to 175 cities across the country.

Security forces have killed an estimated 400 and another 20,000 rounded up and detained in jails under inhuman conditions.

There are reports from many cities of protests and confrontations with security forces who shoot people directly and fire tear gas to disperse them. (Use the links in this story to watch the videos.)

On Saturday, October 8, 2022, the mullahs’ president Ebrahim Raisi visited the all-woman Al-Zahra University. He met strong protests from the young women studying at this university.

The brave young women, students of Al-Zahra University, chanted, “Mullahs must get lost,” “We don’t want a murderer guest“, “and “Death to the oppressor, be it the shah or the (supreme) leader.”

In this way, they foiled the regime’s orchestrated ceremony of welcoming Raisi.

Ebrahim Raisi is a mass murderer notorious for his role in the massacre of 30,000 political prisoners in 1988 and his vicious crackdown in the capacity of the Judiciary Chief on the nationwide uprising in November 2019, killing 1,500 and detaining more than 12,000.

Young people are in the streets in various districts of Tehran. Security forces lobbed tear gas at young protesters in Valiasr Ave., one of the hubs of anti-regime protests in recent years.

Revolutionary Guards are shooting at people and firing tear gas. Security forces are attacking women on the streets and beating them.

People and students also held a protest outside Sharif University and on Azadi Ave. The security forces opened fire on them. The protesters are engaged in hit-and-run battles in this area.

At Amir Kabir University, students chanted in support of Nika Shakarami, the 17-year-old young woman viciously tortured and killed by security forces for taking part in Tehran protests on September 20. “They took away our Nika and brought back her lifeless body!”

At Melli University, students chanted, “Iran is drenched in blood, from Kurdistan to Tehran!”

Tehran’s bazaar merchants have also closed their shops and come to the streets, joining Iran protests on the 23rd day. They have clashed with security forces and set fire to a State Security Force Kiosk.

People and shop owners are also fighting security forces in the business districts of Lalezar, Manouchehri, Koucheh Berlan, and Fakhroddoleh in Tehran.

People are also demonstrating in Baharestan Square, near the mullahs’ parliament, with chants of “Death to the dictator.”

Protests in other cities

People also participated in heated protests in Karaj, the fourth largest city in Iran and a satellite of Tehran. Young people burned trash bins to stop security forces who fired on people.

People also protested in the cities of Gohardasht and Pardis in Alborz Province.

In Mashhad, Iran’s second-largest city, people marched towards Ferdowsi University, blocked the road, and confronted security forces who lobbed tear gas at them.

In Mashhad, a young woman was killed after she was shot in the neck. She has not been identified, yet.

In Sanandaj, the capital of Kurdistan, brave youths forced the security forces to escape and took control of parts of the city. They engaged in hit-and-run battles with plainclothes agents.

Bazaar merchants and business owners closed their shops. They went on strike in solidarity with the Iran protests in Sanandaj, Baneh, Mahabad, Saqqez, Bukan, Marivan, Divandarreh, and Shiraz.