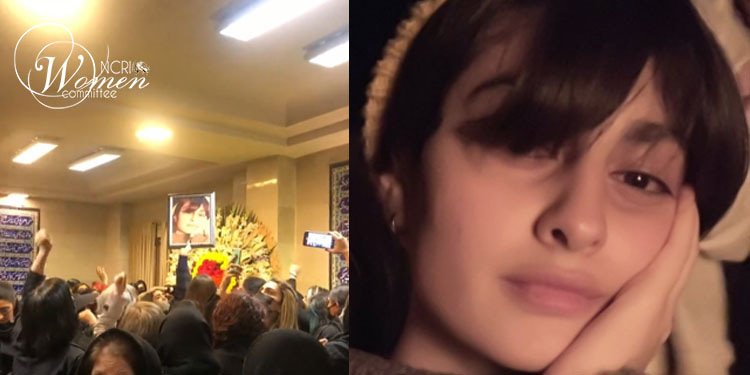 Yalda Aghafazli, 19, died after being released from prison

On the 60th day of Iran uprising, the people of Tehran commemorated the third-day memorial of their beloved daughter, Yalda Aghafazli in a mosque in Sa’adatabad.

Her friends chanted, “This flower is a gift to the nation.”

After the ceremony, they gathered outside and chanting anti-regime slogans. Security forces used tear and pepper gas as well as pellet guns to disperse the crowd of protesters.

The NCRI Women’s Committee had earlier reported on the arrest of this young energetic artist during the protests in Tehran on October 26.

Social media reports indicate that she spent four days in Evin and was subsequently transferred to the notorious Qarchak Prison, where she was held for another 11 days.

In a call from Qarchak Prison to one of her friends, she said one could not conceive of how much she had been beaten in prison to make confessions against her will. She said, “I was beaten in these 12-13 days more than all the 19 years of my life. My voice is hoarse because I screamed and shouted all the time, but I did not express remorse to the last moment.”

She told her friend, “They wrote in my file, ‘the convict did not express remorse,’ and I said yes, this is it. I will not express remorse. And to the last moment, I accepted everything I had done. They said you were in the riots. I said yes. I didn’t cry, and I just shouted and screamed, that’s why my voice is so hoarse. Look, they beat me so much you couldn’t think of it! I can’t talk here very much, but (Ouch, my back, Ouch) I’ll tell you face to face when I’m out. I’ll tell you all of it.”

In a seemingly another audio recording, she is so happy that she did not break in prison. She tells her friend, “I didn’t express any regret to the last moment. It was written in my file that the accused did not express remorse. And I felt, “Yeaaah, exactly!”

After being released on bail on November 9, she was happy that the news of her arrest had been reported and tweeted, etc. And she was so grateful to everyone.

The circumstances of her death are suspicious. It appears that the regime released her from jail to kill her outside. The photo appearing below is when she was released from prison:

The 60th day of Iran uprising

In the meantime, protests are continuing the 60th day of Iran uprising on November 14.

Tehran University students of computer sciences and mathematics carried out a symbolic act during a sit-in, commemorating a young Baluch martyr, Khodanour Loj’eii. They demanded the reinstatement of suspended students for peaceful protests. Students of Social Sciences, and other schools of Tehran University also held protests and sit-ins.

The students at Sharif University of Technology in Tehran held a rally, protesting the regime’s expanding crackdown.

The students of Allameh and Melli universities in Tehran were also among the protesting campuses on the 60th day of Iran uprising.

Students at Qazvin University of Medical Sciences also rallied on their campus, chanting anti-regime slogans on the 60th day of Iran uprising.

Iran’s high school students in Tehran, Karaj, Isfahan, Rasht, etc. also took the streets and chanted, “This year is the year of Khamenei’s overthrow!” and “Death to the dictator.”

Also, the students of Science and Culture University in Tehran commemorated those killed by the regime in the recent protests in a symbolic act in their school on November 13.