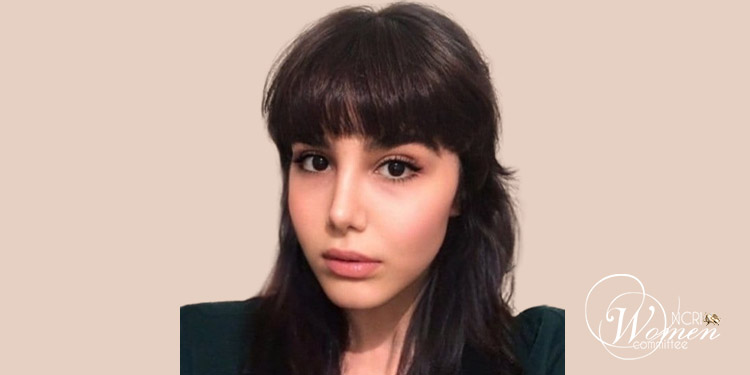 Nazila Maroofian, 23 and a journalist, suffered an infarct before standing trial on January 4, 2023.

This young journalist has been under much mental pressure and psychological torture in prison and interrogation. Since her arrest, she has been confined in solitary confinement or cells with a small number of prisoners. On the day of the trial, she fainted and had an infraction. Nazila Maroofian was transferred to Mofatteh Hospital in Shahr-e Rey, but she was returned to Qarchak Prison without completing the tests.

Nazila Maroofian, a student at Tehran’s Allameh Tabatabai University and a reporter for Rouydad 24, was arrested on October 30, 2022, by order of the Revolutionary Prosecutor’s Office based in Evin Prison in Tehran. She was arrested for publishing her interviews with the father of Mahsa Amini on the Event 24 website in October and November 2022. She was confined in Ward 209 of Evin.

Before the arrest, Nazila Maroofian, the Rouydad 24 reporter, wrote in a Twitter post, “They won’t let me publish my interview a few days ago with Mahsa Amini’s father. First, they called my father in the city… then they called me that there was a warrant for my arrest. If you publish it, you will be sent to Evin on such and such charges!” Nazila Maroofian also worked as a reporter in Dideban-e Iran.

During the interrogation in the detention center, she underwent severe pressure and threats from the interrogators to make forced confessions. And due to these pressures, she suffered two mild heart strokes.

Also, two separate cases have been filed against Nazila Maroofian, one of which has been referred to Branch 26 of Tehran’s General and Revolutionary Prosecutor’s Office and the other to Branch 1024 of the 2nd Criminal Court of Tehran.

Her defense lawyer, Mohammad Saleh Nikbakht, said that on January 4, he appeared in court and announced his representation. Still, he needed access to read the case and learn about his client’s charges.

Despite her dire physical condition and the completion of preliminary investigations, contrary to the usual practice of Iranian courts, the judicial authorities refuse to convert her temporary arrest order into the bail. Now, Nazila Maroofian is kept in Qarchak prison without any medical care.

The security forces have threatened her family that they should not inform the media about their daughter in any way; otherwise, they will make the situation more difficult for Nazila.

Six years in prison for Yalda Moayeri, a photojournalist

The Tehran Revolutionary Court sentenced Yalda Moayeri, a photojournalist and a member of the Photographers’ Guild, to six years in prison and additional punishments.

Yalda Moayeri, a photographer for 23 years, was arrested by the security forces during protests in Tehran on September 22, 2022. After some time, she was transferred to Qarchak prison in Varamin.

The 26th branch of the Tehran Revolutionary Court convened on November 30 to deal with Yalda Moayeri’s charges. On December 20, she was temporarily released on bail until the end of the proceedings.

In a video she published, Yalda Moayeri said that on the charge of “assembly and collusion to commit crimes against national security” and “propaganda activity against the state,” she had been sentenced to six years in prison. She has also been banned from leaving the country, using cell phones and smart devices, and living in Tehran and neighboring cities for two years each, in addition to providing free public services as a janitor in a women’s park for two months and preparing a 100-page research paper as additional punishments.”

Photojournalist Yalda Moayeri was imprisoned for 32 days in the IRGC Ward 2A of Evin and 60 days in Qarchak prison for photographing public protests. She said in a video about the punishment for sweeping the women’s park. “I have no problem with this honorable job and profession, but I will gladly do this if I am not allowed to photograph the realities of my land.”

Yalda Moayeri took the famous photo of a female protester amidst tear gas smoke in December 2017 and won the Year’s award.

Reyhaneh Saeedi, M.D., sentenced to 1 year and 8 months in prison