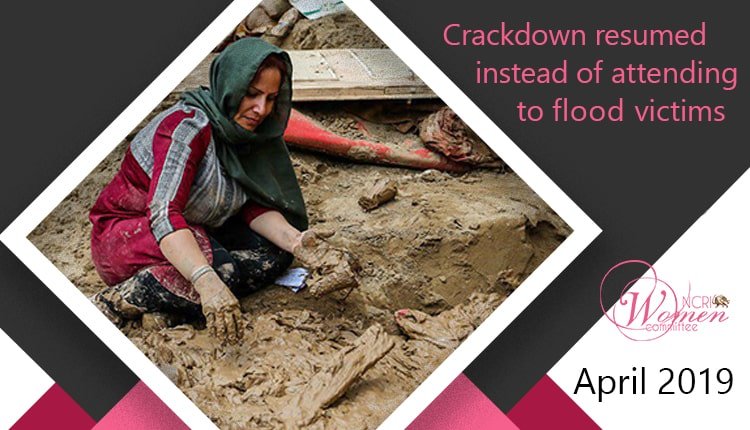 The flood crisis continued to overshadow all other issues in Iran throughout the month of April. All Iranian provinces have been affected by floods. At least two million citizens are in need of humanitarian aid and more than half a million have been displaced, losing their homes and all their belongings. Instead of sheltering people, the regime’s Red Crescent is selling them tents for 500,000 tomans, each.

In the NCRI Women’s Committee Monthly Report – April 2019 we read that according to an MP, in Khuzestan, alone, at least 300,000 houses have been destroyed. Hedayatollah Khademi said if the damages by floods is equal if not more than the damages caused by the eight-year war with Iraq. Other sources describe the incident as the worst natural disaster happening in Iran in the past 15 years, affecting 2,000 cities and town in 31 provinces.

The situation of flood victims is critical, as many are stranded in remote areas without access to food, clean water, medicine, clothing and heating.

And yet the regime, instead of attending to the needs of the affected citizens, has brought in their mercenary paramilitary troops from Iraq, Afghanistan and Pakistan, to quell the outraged residents of flood-hit areas.

In the NCRI Women’s Committee Monthly Report – April 2019, we read about how the regime has stepped up its social crackdown. New arrests and imprisonments, issuing sentences for civil and human rights activists, violating of the rights of political prisoners, et. The regime also summoned hundreds of drivers in Tehran to warn them against flouting the compulsory veil inside their cars, and kept harassing Iranian women and girls for their defiance of the compulsory veil.