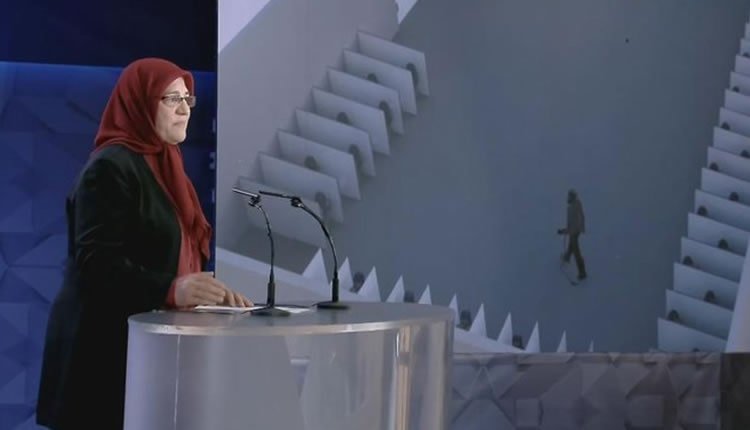 My name is Hengameh Haji Hassan. I was a nurse and worked at Tehran’s Sina Hospital. I was arrested in 1981 because I was a supporter of the Mojahedin (PMOI/MEK).

Many of my colleagues who had been arrested before me were later executed. One of them was Dr. Fahimeh Mir-Ahmadi, an intern at Sina Hospital, who was pregnant at the time of execution. Our crime was treating those who had been wounded by Revolutionary Guards in demonstrations or on the streets and had been brought to the hospital by the people.

I spent one year in Evin Prison under torture and was subsequently transferred to the Ghezel Hesar Prison. Torture continued just as bad in Ghezel Hesar Prison. Depriving prisoners of sleep and bathing, and keeping them out in the cold weather, were among commonly used tortures. Another form of torture was the detention of some 30 people in closed door cells made for only three. Prisoners were further tortured in the “residential units,” cages and coffins.

I was personally detained in the cage for 7 months. The cage was built with two boards of approximately 160 x 60 cm and 70 cm in height. They had made a large number of these cages in various rooms in the residential units in Ghezel Hesar Prison.

We were not aware of this ourselves. One day they attacked our ward, and started beating and whipping the inmates. Then, they took many of us to these cages.

We had to sit in the cage while wearing the chador. We were blindfolded and not allowed to move or make any noise. We could not even sneeze or cough.

The cage was very tight. We would be flogged and tortured if we hit the boards and one of the boards fell on the person next to us. As for myself, because I was tall and my head was higher than the boards, I could be seen, so they would constantly beat me on the head with whips or sticks, telling me to get my head down. So, I had to stay crouched for a long time, as a result of which my back hurt so much that I still have not recovered after five surgeries. I also suffered strabismus in the left eye.

Throughout the time we were held in these cages, the torturers used any excuse to torture us without us even doing anything. For example, if our spoons hit the plate and made any noise while eating, they started beating us because they accused us of using Morse code to communicate with the prisoner in the next cage.

Since we were blindfolded, we never knew when we were being attacked. Then, suddenly we were struck hard out of nowhere, a heavy blow which would throw us against the wall. Sometimes, the prisoner’s head hit the wall and she went unconscious. We could tell this since we could not hear her moan.

Davoud Rahmani, the warden of Ghezel Hesar Prison, was a revolutionary guard who told us, “This is the Doomsday, the end of the world. We’ll kill you all, and your voice will never be heard anywhere.”

They had suspended our visits, too, and our parents had been wandering around in various prisons for months looking for us. They were even looking for us in other cities but found no trace of us.

Our schedule in the cage was that we would be taken to the toilet three times a day for three minutes each time. There was not even enough time to brush our teeth. There were no showers for weeks. They did not give us food or if they did it would be a water-downed soup with dried bread or some rice filled with sand which showed that it had not been cleaned or washed before cooking.

We did not have watches and we never knew what time it was. But around midnight we were allowed to sleep after staying in a sitting position all day which wore us down. Just as we lay down to stretch and sleep, they would turn on the loudspeakers, playing the strident mourning songs of the regime. There was absolutely no way to sleep. And then after two or three hours, they would wake us just to continue sitting again.

The constant blindfold, the silence and unawareness, and the severe physical torture really disturbed the prisoner’s sense of balance. One would think that they are trapped in a dark tunnel with no beginning or end, and it was a very difficult condition to endure. In this way, the torturers sought to break and force us to give up on our struggle and surrender.

In such conditions, I thought to myself that it was my turn to once again remind the enemy of the words and actions of a Mojahedin supporter just as my friends and companions had done.

Tahmineh Rastegar Moghaddam was my friend. She was also a nurse and we had been arrested, simultaneously. She saved me from getting executed by undertaking my crime, which was carrying a statement. She got executed for doing so.

Shekar Mohammadzadeh, another dear friend of mine, was arrested in the operating room while she was with a patient under surgery. She was taken directly to Evin Prison. She was sentenced to 15 years in prison. But after 7 years of torture in the residential units, the cage, and the coffin, she was executed in 1988, along with my other colleague, Akram Bahador, and thousands of other prisoners.

At this point, I decided to prepare myself for the most difficult, long, dark days ahead, because I knew this situation would continue. So I planned for all of my days and moments. Every day, I tried to remember and review what I had learned over the years, including songs, poetry, biographies of martyrs, political articles, etc. I remembered and reviewed all the lessons I had learned at school, one by one. I held conferences and explained things to myself. I tried to remember and complete and memorize every song and poem I knew from my childhood. I also had a physical exercise program twice a day. Although we were not allowed the slightest movement, but I exercised in my mind.

I also missed my patients a lot. In my mind, I went to the hospital every day and talked to my patients and treated them. At nights, when we could not sleep due to the loudspeakers, I trained myself to shut down those noises and concentrate so hard on not hearing them. Instead of listening to those sounds, I tried to remember the beautiful sceneries and the mountains I had visited with my friends and tried to feel like I was there. That way, I was able to overcome those sounds and sleep.

But the most difficult situation was when the feeling of loneliness overcame me. Those moments were the hardest for me. But what inspired me was remembering that God is always with me and helping me. I also used to think of my leader, Massoud Rajavi (the leader of the PMOI). I had vowed to continue fighting in his footsteps. I spoke to him in my mind, and I no longer felt alone.

The torturers thought they could break the will of Mojahedin sympathizers through torture and get rid of us. However, they did not know that this would have the opposite effect on the Mojahedin. The more they tortured me, the more I realized that this was the right path which I had to continue at all costs.

We considered ourselves PMOI representatives in prison and we deemed it our responsibility to defend our cause and our leadership. We felt indebted to him because he had led us to the best, most beautiful, and most honorable path. He never wanted anything for himself and thought of nothing other than the freedom of his people. So, after we came out of prison, the first thing we did was to rejoin the organization and continue our path at all costs, and this is a path that we will continue till the end.