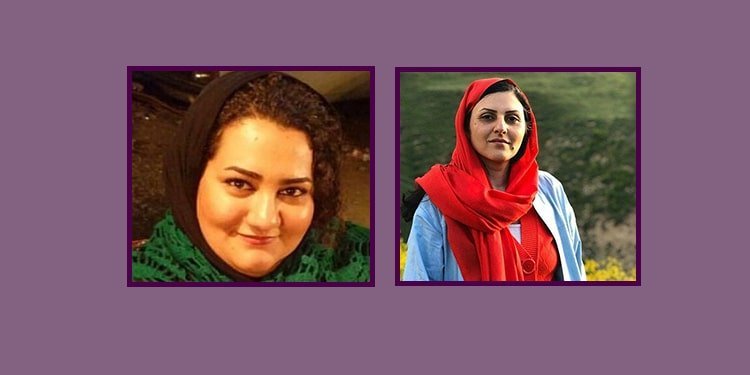 Increasing pressure on women political prisoners in Evin and Qarchak

Reports from Evin and Qarchak prisons

Increasing pressure on women political prisoners is underway in the prisons of Sanandaj, Evin and Qarchak in Varamin. Political prisoner Golrokh Ebrahimi Iraee is banned from visiting her husband. There is a possibility of new charges being brought against Atena Daemi. Leila Tirandari, women’s rights activist, is on hunger strike and Pouran Nazemi is in an uncertain state.

Political prisoner Golrokh Ebrahimi Iraee, currently detained in Qarchak Prison in Varamin, is denied access to visit and call her husband, Arash Sadeghi, political prisoner in Gohar Dasht Prison in Karaj.
Golrokh was transferred to Qarchak Prison after she was arrested on November 9, 2019 and taken to Branch One of the prosecutor’s office in Evin Prison. According to the order issued by the head of the branch, Judge Mohammad Baraii, Golrokh was to be transferred to Evin Prison. However, Gholamreza Ziaii, the head of Evin Prison refused to accept Golrokh Ebrahimi Iraee in Evin Prison.

To increase pressure on women prisoners, the phones in the women’s ward in Evin Prison continue to be cut off and some women political prisoners are barred from family visits in-person and behind cabins. On Sunday, December 29, 2019, the families of several women political prisoners referred to Evin Prison after seven days of not hearing from their children. Eventually, the prosecutor in charge of political prisoners told them that disconnecting the women’s telephone line in Evin Prison was a punishment.
He also informed Atena Daemi’s family of the possibility of new charges being introduced for the civil rights activist on charges of assembly and collusion and disorderly conduct in prison.

Pouran Nazemi in custody and uncertainty

Pouran Nazemi, one of the women detained during the 40th Day ceremony of the martyrs of the November uprising, is in detention and in an uncertain state. Pouran Nazemi is denied the right to telephone and access to a lawyer. There is no information about her whereabouts.

Leila Tirandari in custody and on hunger strike

Leila Tirandari, women’s rights activist, was summoned to the Department of Intelligence in Sanandaj on December 28, 2019 and arrested. She was arrested while recovering from a kidney surgery she underwent about two weeks ago and is in poor health. During a telephone call, Leila Tirandari informed her family that she had gone on a hunger strike in protest to the pressure on her to obtain forced confessions.
Leila Tirandari is a nurse at a hospital in Sanandaj.