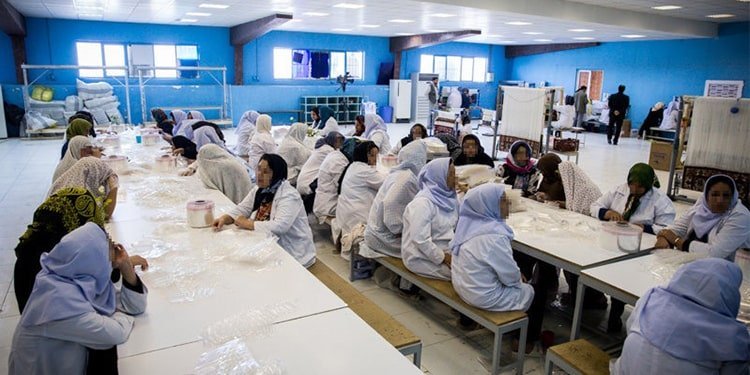 In Iran, female prisoners serving their prison sentences for ordinary crimes, work in prison workshops for meager wages, in other words they do forced labor.

Some female prisoners are responsible for their family’s living expenses and some work to pay for their blood money and fines. These women need adequate wages, but because prisoners are not subject to labor laws, minimum wage and welfare insurance requirements do not apply to them. Those prisoners who work in prison are not entitled to any legal document for their work. A member of the Supreme Labor Council said that prison workers are not covered by labor laws and insurance and are not supervised by the Labor Ministry. (The state-run ILNA news agency – December 26, 2019)

Prisoners working in prisons which are located in suburbs and counties are paid less compared to larger prisons and prisons in the capital. A similar discrimination applies to women who are paid less than men. Women workers have no right to protest against their working conditions.

Female prisoners have no right to choose their jobs. Surrounded by prison walls and behind bars, their rights have been forgotten. There are no laws governing the lives and jobs of these women, some of whom have to remain in prison for long years.

Because of poor conditions in the wards, most of these women are willing to work to stay away from the place. Already deprived of their social rights, these women are further abused in prison through forced labor.

The workshops are located in the women’s wards and women do not need to leave prison to go to work. Prison jobs available for women include bakery, cooking, cleaning vegetables, sewing, cleaning, packing sugar and coffee, and handling the cargo.

A woman called Nesa, who works at Sepidar Prison in Ahvaz, said her salary was not enough. Nesa comes from Khuzestan and has been in prison for more than 3 years. She and her husband are both in jail. She spends her wages to pay for the treatment of her little son who has cancer. She has two other children outside the prison waiting for their mother to be released.

She has been working at Sepidar Prison’s tailor since the age of 31, every day from morning till 6 p.m. She sends her little boy and girl only 100,000 tomans (8.70 USD) a month. They live with their grandmother in the absence of their parents.

Women like Nesa who have to pay for their children whether out of jail or in some cases inside the jail and with them in the public prison wards, are willing to do any type of job.

Sepideh is another woman who has been both in Qarchak Prison and now in Sepidar Prison. The situations of women prisoners in Qarchak and Sepidar are similar in terms of employment. “You gradually realize that working in the kitchen requires only one thing, strong arms,” said Sepideh. “It’s painful after using a knife to peal potatoes for a couple of hours.”

Somayyeh Shahbazi, who was hanged in December 2019, was one of such oppressed workers in prison. Somayyeh wanted to save her meager monthly wages to buy her life by paying her blood money but she was eventually executed.

The mullahs’ religious dictatorship in Iran keeps many female prisoners on the death row for many years. Some of these women are mothers with children.

Everywhere in the world, women and especially mothers, are not kept in prison, rather they are given alternative sentences because they bear the burden of raising their children. But the mullahs’ misogynistic laws do not recognize any rights for these female prisoners.

At least 103 women have been executed after unfair trials during Rouhani’s tenure as the mullahs’ president, and many women are still on the death row. The names of a number of these women who are on the death row in Qarchak Prison are as follows:

Shoghra Eftekhari, 48, has a child, sentenced to retribution;

Fereshteh Shirazi, sentenced to retribution after 8 years of imprisonment;

Ashraf Kalhor, sentenced to retribution after 18 years of imprisonment;

Faranak Haddad, has a child, sentenced to retribution.