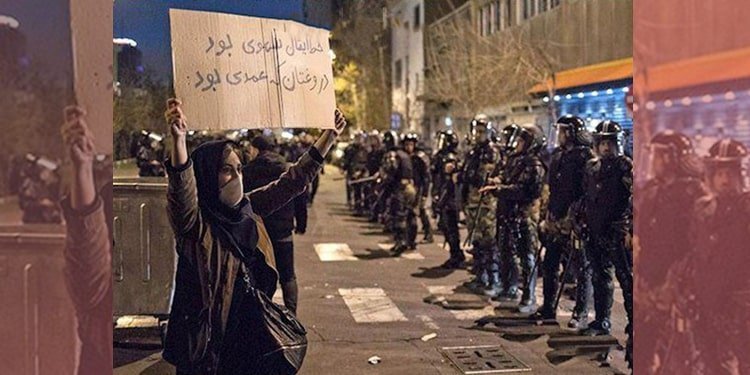 The people of Iran directed their anger and protests against the clerical regime during funeral ceremonies of victims of the IRGC downing of the Ukrainian Airliner in various cities on Thursday, January 16, 2020.

In Sanandaj, capital of the Iranian Kurdistan Province, a large group of people participated in the funeral of Dr. Aida Farzaneh and Dr. Arvin Morattab, victims of the Ukrainian plane crash despite heavy presence of security forces and chanted anti-government slogans.

Women were very active in this act of protest. They chanted “death to the dictator,” “death to Rouhani,” “I will kill whoever killed my brother,” and “they killed our elite and replaced them with the mullahs.” Participants also sang an anthem, vowing to continue the path of martyrs.

The students of the University of Sanandaj also held a protest on Thursday evening, January 16, 2020, on their campus. Members of the paramilitary Bassij intervened to clamp down on student protesters, but students chanted directly in their face: “Bassij must get lost.”

On the same day in Shiraz, capital of Fars Province, in southern Iran, a group of people participated in the funeral ceremony for Ghanimat Ajdari, another victim of the plane crash.

Born in Shiraz, Ghanimat Ajdari was a Ph.D. student of Environment in Canada. She also reported on environmental issues and was an activist in this field. She had defended the rights of nomads in Fars Province for years.

In Isfahan, capital of Isfahan Province in central Iran, a large group of people participated in the funeral of victims of the Ukrainian plane crash. The regime had stationed large number of plainclothes agents and Bassij members in the area to prevent any form of protest in this ceremony. They outnumbered the participants several folds.

On Wednesday, January 15, 2020, students of the Industrial University of Isfahan also held a protests against the IRGC’s downing of the Ukrainian civilian aircraft on their campus. They were symbolic masks to show their outrage over the atmosphere of repression. One the placards the students held, read, “1500+176 is not a human error.”

Revolutionary Guards had been stationed behind the university’s gate. The security department of the university also took action to prevent the continuation of the students’ protest. The students of Isfahan’s Industrial University, vowed to continue their protests until they reach their goals.