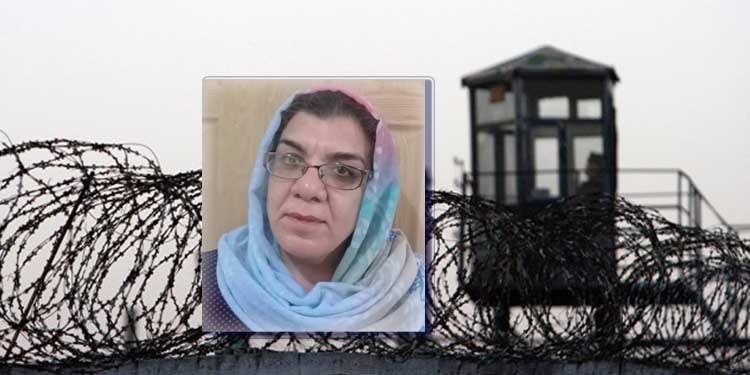 Parvin Mohammadi, Vice President of the Free Union of Iran Workers, has published her experience of being detained in the Agahi Prison of Karaj and the Kachouii Prison for women in Alborz Province, a summary of which follows:

The Agahi Prison of Karaj is run by the State Security Force. The detention center has a hall of around 30-square-meters, a 3-square-meter cell, a 40-square-meter covered area, three toilets and three showers, only one of which works.

Women find it difficult to obtain hygiene products because there are no special stores for women.

The bathroom doors are locked and are opened for only half an hour in the afternoons upon prisoners’ pleas. Often there is no warm water for bathing. There is no soap. They give a third of a disposable cup of shampoo for several people to use. There is no laundry detergent. Prisoners dilute the detergent used for washing the toilets, to wash their clothes. And to get some of that detergent, they have to beg. There is no place for drying clothes. The toilet door is used to hang and dry clothes.

There is no place for prisoners to get fresh air. Tea, hot drinks and fruits are not given. Breakfast is only a slice of bread and a small amount of cheese. Lunch and dinner are always cold and of extremely low quality.

In Agahi Prison of Karaj, prisoners are not allowed to contact their families.

Parvin Mohammadi was detained in the quarantine ward 3 of Kachouii Prison. Altogether, the prison has four halls similar to ward 3. Every ward is a long hall housing some 54 prisoners. There are two rows of metal bunk beds, each for three prisoners.

The prison also has a clinic, a library, a workshop, and a 2-by-2-meter kitchen with a stove and a large samovar to prepare hot water. It also has a courtyard full of pits and holes. This 200-square-meter courtyard is used for washing blankets and carpets and hanging clothes. Prisoners can walk around in this courtyard from 8 a.m. to 8 p.m. The area is very small for the prison population and it is not even possible to do exercises.

In ward 3, there was a television installed near the ceiling. The officer in charge of the ward held the remote control. No newspaper was distributed. Prisoners were practically being held unaware of society’s events and the only news they received was from their families. Everybody has sleep silently in bed at 10 p.m., and at 7 a.m. after waking up, the prisoners in the ward are counted.

To drink water, if a prisoner has an empty bottle, she can fill it with water from the bathroom and keep it with her. A small amount of bread, sugar and tea is given to every five prisoners. The food quality is very poor, and mostly inedible.

All food and clothing and utensils are kept beneath the bed in plastic baskets.

There is a bathroom with 3 toilets and 2 showers at the end of the hall separated by a thick curtain from the living area.

To wash clothes, every 5 people are given one basin, which is actually a 20-liter gallon cut in half and the prisoners cut their hands on the sharp edges of the gallon.

To contact families and relatives, there are only 4 telephones for the entire 250 prisoners in a corner of the hall where one prisoner assigns turns. Every other day, each person gets 15 minutes of telephone calls. They have to wait 2 hours in line for their turn.

There is a workshop in the southern part of the prison.

More than 50 people go to the workshop’s production rooms every day to do forced labor. These imprisoned women work from 9 a.m. to 12 p.m. and again from 2 p.m. to 4 p.m.

Marjan Davari sentenced to 75 years in prison in Qarchak Prison