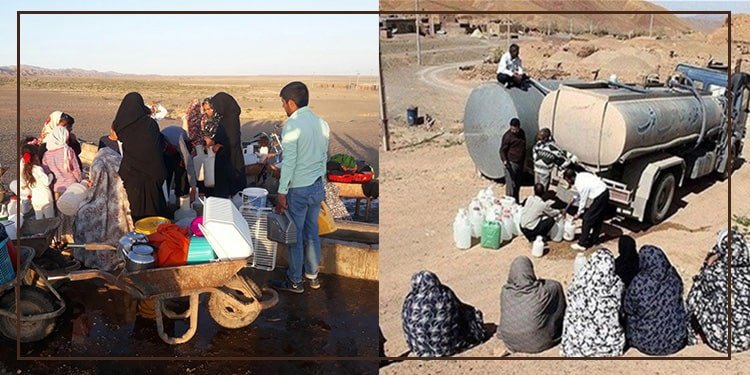 Bashirabad is located 27 kilometers from Torbat-e Jam. With 132 families, the village has a population of more than 500, all of whom are deprived of potable water.

In Bashirabad Village, given the lack of drinking water, women are forced to carry water from an aqueduct or spring that is 1.5 kilometers away. Sometimes the deprived women from this village transport water using wheelbarrows.

Most rural women suffer from lumbar disc disease, as well as osteoarthritis of the neck. And recently led to five pregnant women experiencing miscarriages.

Speaking about the water shortage, the head of Bashirabad Village, Mohammad Shekarchi, declared, “The village does not have running water. Since 2003, the local water supply has come from a water tank. The city’s water department drains a 10,000-liter tank in a concrete reservoir in the village every day. This amount of water is not enough for even 50% of the villagers’ consumption. The rest of the villagers are forced to use an underground aqueduct or a spring that is 1.5 kilometers away to secure water” (The state-run ILNA News Agency – June 3, 2020). Since the end of March 2020, the city’s water department has requested about one million rials for each water tank. This amount far exceeds village’s budget, and is more than residents can afford, yet the water department has threatened to suspend water delivery if the amount goes unpaid.

In 2012, Bashirabad Village was slated for a water supply project that, through adequate plumbing, would bring in water from a spring some 5 kilometers away. However, the project was closed down the same year and remains stalled. Thus far, the regime has not taken any steps to restart or complete the project.

According to the head of the Torbat-e-Jam Water and Sewage Company, the sum of 10 billion tomans of credit would be needed to transfer water to this village; however, the government refuses to allocate the funds.

In the budget document of the fiscal year 1399 (March 2020-March 2021), the clerical regime has allocated 2,000 million Euros from the National Development Fund to reinforce the country’s defense power (amendment 4). In the same document, the government has ordered the Water and Power Ministry to provide the funds needed for providing water to villages and rural areas by charging the urban population for every cubic meter of water (amendment 6) for up to 965 billion Rials which was approximately $55 million at the exchange rate of those days.