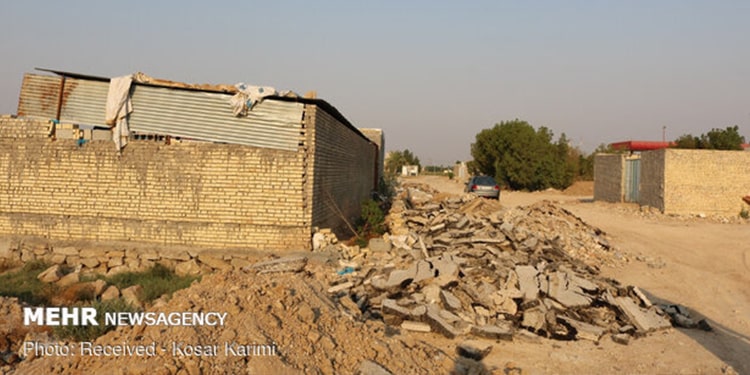 The southwest Iranian village of Abolfazl near Ahvaz was the scene of clashes on Wednesday, August 26, 2020, between the deprived residents of this village and the regime’s security forces who were acting on behalf of the Mostazafan Foundation to raze their houses.

Problems of women and children

A middle-aged mother spoke about the problems she was facing. “Our houses are being destroyed here. I have five disabled children, one of whom has died. I wish they looked at us with more compassion so that we would not suffer so much in fear of losing our shelter,” she said.

The women and children of this village cannot leave their homes due to the unbearable heat. The village’s electricity supply has dwindled because the Mostazafan Foundation requested that the utility company stop installing electricity poles. With weaker electricity, air conditioners cannot operate. In the hot, sultry weather in Ahvaz, the situation is especially unbearable for women and children.

The history of Abolfazl village

Hazrat-e Abolfazl village is located between Zardasht town and Kianshahr of Ahvaz, capital of the oil-rich Province of Khuzestan in southwestern Iran. The state media have reported that some 300 families have been residing in this village since four decades ago.

On August 26, 2020, the state-run Sharq daily wrote: “The inhabitants of Abolfazl village which is 25 hectares in total, have deeds according to which some of the residents of the village were granted farming water quotas since 1985 till 1991 to plant wheat, barley, vegetables, etc… The deed also indicates that the village inhabitants have been living there for 40 years. But the Mostazafan Foundation claims to own their lands and is preventing them from receiving rural services.”

For about a year now, the Mostazafan Foundation which operates under direct supervision of Ali Khamenei, the mullahs’ supreme leader, has been claiming ownership of the lands in this village and seeking to force out its inhabitants. The villagers who resisted the demolition of their homes, got arrested upon the request of the foundation.

Khuzestan province officials have only promised to follow up in response to villagers’ complaints but have taken no action.

Mostazafan Foundation, in the name of the poor, for the benefit of the rich

The Mostazafan Foundation (or the Foundation for the Oppressed) is one of the main centers of corruption and looting of the property of the Iranian people.

A state-owned newspaper wrote, “The Mostazafan Foundation was established in 1979 to serve needy and underprivileged social classes and eliminate deprivation. But a look at some of the foundation’s activities gives the impression that this large foundation has become a tool to build wealth among some of society’s richest individuals. The transfer of ownership of properties and buildings of several thousand meters to influential people in the upper areas of the capital city is just one example of how the foundation has violated its primary goals.” (The state-run Hamdeli daily newspaper – August 22, 2020)

For more than 40 years, 300 families have built houses and lived in Abolfazl village. Now, they are being forced to vacate their homes while the Coronavirus has spread on the one hand, and on the other, and the sultry and unbearable heat and unhealthy economic situation, on the other hand, have made the life for the people more difficult. These 300 deprived families cannot afford to buy or even rent a house in other suburbs of Ahvaz.

It is very painful and intolerable for any human conscience to imagine how the women of Abolfazl village can take care of their children after evacuating their homes or meet their families’ needs given their lack of shelter.

Not only the corrupt state officials have not given any consideration to these villagers’ need for a decent life and fundamental rights, but are the leading cause of the villagers’ homelessness.