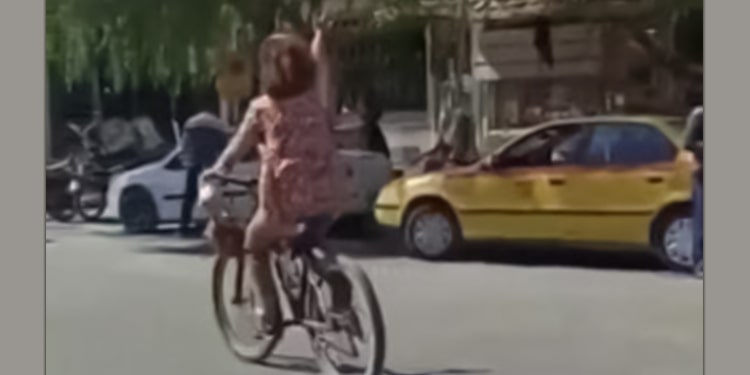 Woman arrested in Najafabad for defying the compulsory veil

The clerical regime’s news agencies reported on the arrest of a woman who removed her Hijab while riding a bicycle. The NCRI Women’s Committee condemns the unjustified arrest of this woman for defying the compulsory veil and calls for her immediate release.

Najafabad is one of the major cities in Isfahan Province, central Iran.

A videotape showing a woman riding a bicycle without covering her hair circulated in the social media on October 19. The Governor of Najafabad said they had also identified and arrested the persons who filmed and disseminated the video.

Media reports did not specify the identity of the woman and those who filmed and posted the video.

All campaigns and efforts to crack down on women using the pretext of enforcing the compulsory veil, are meant to suppress Iran’s defiant women.

There is no compulsion in Islam for covering one’s hair and the Iranian Resistance respects women’s freedom of choice in this regard.

The NCRI is committed to the Convention on the Elimination of all Forms of Discrimination against Women (CEDAW), the Ten-Point Plan of the NCRI President-elect Maryam Rajavi stresses.

The Ten-Point Plan also condemns any form of discrimination against women and reiterates Iranian women’s right to freely choose their clothing.

The clerical regime must immediately release this innocent woman who was only exercising her right to freedom of opinion and freedom of choice.