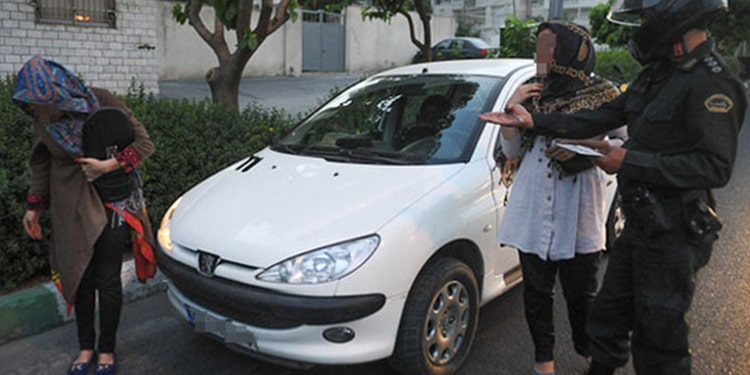 According to sources in the Iranian resistance, the death toll from the Coronavirus has exceeded 135,000. Hossein Gheshlaghi, a member of the supreme council of the regime’s medical system, indicates that the number of infections is three to four times higher than reported by official sources.

Despite these circumstances, representatives of the mullahs’ Supreme Leader, Ali Khamenei, are prioritizing a new wave of suppression against Iranian women. They justify their actions by citing “social security” concerns. This is a priority for the State Security Force (The state-run Mehr news agency – October 25, 2020).

“According to the order issued by the Commander-in-Chief of the State Security Force, one of the critical points the police should consider in carrying out its missions is dealing with the Sharia vice,” Khamenei’s representative in Khorasan Razavi Province, Ahmad Alam ol-Hoda, said during Friday prayers on October 23, 2020.

He then encouraged the regime’s repressive forces by saying, “The axis of responsibility of the State Security Force is to maintain order and security in society. If lustful currents are discussed in society in positive terms, there will be no security and order in this society” (The state-run ILNA news agency – August 19, 2020).

Meanwhile, Falahati, Khamenei’s representative in Gilan province, praised the Judiciary and the State Security Force for lending their support to forces that “promote virtue and forbid vice.”

He stressed the need to pay any price for the survival and security of government officials. “The revolution was created to provide security for the believers… We should not be indifferent to those who break the norms. Rather, we should forbid them from vice or report them to the Judiciary and the State Security Force” (The state-run Mehr news agency – October 23, 2020).

Ghorban-Ali Dorri Najafabadi, Ali Khamenei’s representative in Markazi Province and the Friday prayer leader of Arak, also called for the harassment of women in the street. “Verbal warning is not a crime, but everyone’s duty,” he said (The state-run Mehr news agency – October 23, 2020).

“If the State Security Force, the intelligence services, the Judiciary, the IRGC, and the Bassij do not take decisive action against criminals, our people will be stripped of peace. Our enemies are not sitting idle; they are inciting sedition and corruption every day.”

In addition, Habibollah Sha’bani, Khamenei’s representative in Hamadan Province and the Friday prayer leader of Hamadan, declared, “The State Security Force should not allow criminals to feel safe in society.”

“In cases where the SSF does not have legal purview, ethics and justice oblige them to be present with a sense of duty under various circumstances,” Sha’bani said in a meeting with SSF commanders on October 22, 2020 (The state-run Fars news agency – October 22, 2020).

Following these statements, reports of repressive actions by government-affiliated institutions were published in the media, all of which met with strong and courageous reactions from women and youth.

According to the state-run Young Journalists Club, a female agent “promoting virtue” was beaten by another woman who had been harassed by the agent for walking her dogs.

IRGC Commander Akbar Qassemi in Rasht acknowledged the regime’s failure in imposing the regime’s values on people, stating, “Unfortunately, with the expansion of networks and social media, we are witnessing the introduction of a culture of lewdness and indecency by some norm-breakers in society.”

Amid these threats, regime officials have resorted to another act of misogyny in recent days. On October 22, 2020, a number of citizens in Royan, Mazandaran, who had visited the graves of their loved ones, found that the photographs of the deceased women on the gravestones had been covered by paint.

The families of the deceased immediately protested. A person whose mother’s photo had been covered in paint said, “In the beginning, everyone we followed said they were uninformed. But then we heard that this was done based on a decision by the board of trustees.”

40 years of enforcing the compulsory veil has borne negative consequences

During the 40 years of the mullahs’ rule, Iranian women have bravely defied the state’s misogynistic acts on every occasion. The women’s acts of defiance have become so evident that even government officials have been forced to acknowledge it.

“Really, why is there so much insistence on enforcing the mandatory hijab when they see its negative result over 40 years? It is interesting that in other countries, the number of women wearing the hijab is increasing, but they are declining in Iran,” wrote Mostafa Tajzadeh, former Deputy Minister of Interior and former Deputy for International Affairs at the Ministry of Guidance. (The state-run T.news – October 21, 2020).

What should be emphasized alongside these confessions is that not only do the Iranian people not want the compulsory veil; they do not want the entire clerical regime.

In the December 2017-January 2018 and November 2019 protests, the people of Iran have demanded the overthrow of this regime. And they will fulfill this demand soon.