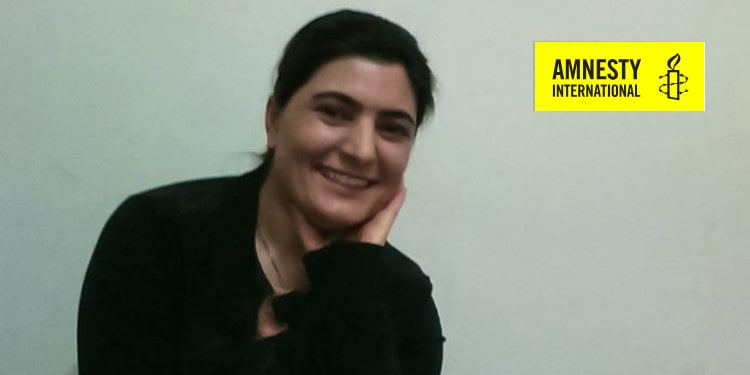 Amnesty International issued an urgent action on February 1, 2021, expressing concern over the fate of Zeynab Jalalian, and calling on its members to appeal to the regime’s Judiciary for the immediate release of this Kurdish political prisoner.

Amnesty International said in its statement, “Ministry of Intelligence agents are torturing Iranian Kurdish woman Zeynab Jalalian by deliberately denying her health care to coerce her into providing a videotaped ‘confession’. This intentional denial of health care is causing her severe pain and suffering, particularly as she has serious medical conditions, including post-Covid-19 breathing difficulty.”

“Pending her release,” AI said, “she must be provided with adequate health care, including transfer to outside facilities for treatment unavailable in prison, protected from further torture and other ill-treatment and transferred to a prison closer to her family home.”

Amnesty International addressed a letter to the clerical regime’s Judiciary Chief, Ebrahim Raisi, in which it said:

Since 29 April 2020, as prisons across Iran experienced outbreaks of COVID-19, ministry of intelligence agents have transferred Iranian Kurdish woman Zeynab Jalalian to four different prisons across the country and, in violation of the absolute prohibition against torture and other ill-treatment, held her in prolonged solitary confinement and deliberately denied her access to adequate health care. The ministry of intelligence is conditioning access to adequate health care, transfer to a prison closer to her family home in West Azerbaijan province and an end of reprisals against Zeynab Jalalian and her family on her “confessing” to wrongdoing and expressing remorse for her past political activities on camera and agreeing to work with the ministry of intelligence. Zeynab Jalalian has been intentionally denied transfer to outside facilities for medical treatment unavailable in prison for over six years. Only once in 2020, she was briefly provided health care outside of prison in June after testing positive for COVID-19. She has had no further adequate access to health care, including for a post COVID-19 respiratory condition which she said is so acute that it prevents her from sleeping, and for a serious eye condition.

On 29 November 2020, Ali Jalalian, Zeynab Jalalian’s father, was arrested by ministry of intelligence officials and interrogated about speaking about his daughter with human rights organizations and media outside of Iran; he was released on bail a day later.

Zeynab Jalalian is serving a life sentence in Yazd prison, 1,400 km away from her family home, following a grossly unfair trial in December 2008 that lasted a few minutes without her lawyer present. Following her arbitrary arrest, Zeynab Jalalian was held in prolonged solitary confinement for eight months without access to a lawyer, and has said that, during this period, intelligence officials tortured her including through flogging the soles of her feet, punching her in the stomach, hitting her head against a wall and threatening her with rape.