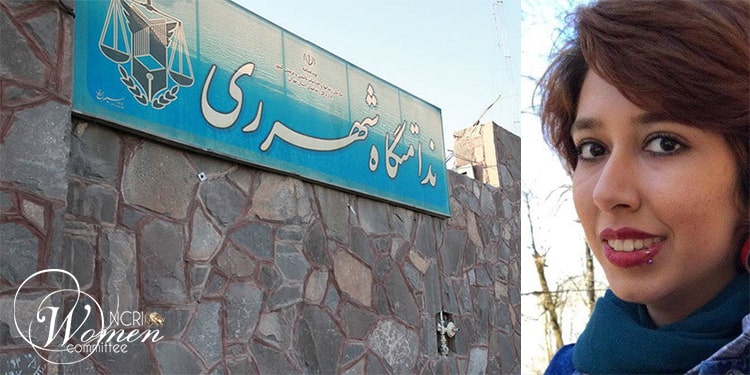 Saba Kord Afshari contracts Covid-19, after being transferred to Ward 6 of Qarchak Prison.

Her symptoms include fever, pain in the chest and dry coughs.

New arrivals in Qarchak Prison are not quarantined or screened for their health before being sent into the prison and inside the wards among other prisoners. Social distancing is neither observed in Qarchak Prison.

Saba Kord Afshari is serving a 24-year sentence for protesting the mandatory Hijab enforced on Iranian women by the clerical regime. She was banished from Evin Prison to Qarchak on December 9, 2020. Her prison sentence was recently commuted to 7 years.

Saba Kord Afshari was violently moved from Ward 8 to Ward 6 where inmates convicted of violent crimes are detained on January 26, 2021.

Male and female guards banged their batons and stun guns on the walls and doors to terrorize the inmates. Then, they broke into Ward 8. They told other inmates that Saba Kord Afshari must be transferred out of the ward or they are going to be responsible for whatever happens to them.

Saba was in the courtyard taking fresh air at the time. The guards caught her by the hair, dragged her on the ground and moved her out of the ward. They also tied her hands in the back. Ms. Kord Afshari’s arms have been badly bruised.

Previously, political prisoner Zeinab Jalalian was transferred from Khoy Prison to Qarchak Prison where she contracted the Coronavirus.

The clerical regime has used the pandemic to torture and murder its political opponents. Iranian prisons do not have the minimum medical facilities and accommodations to provide care for sick prisoners, let alone those infected with the virus.

The quarantine in Qarchak Prison is unsanitary and devoid of minimum basic needs for prisoners.