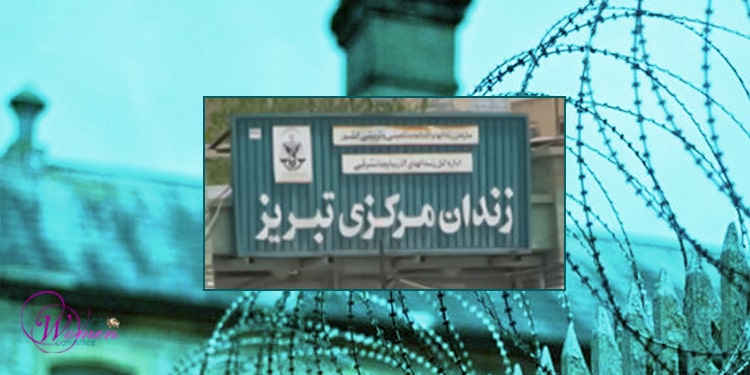 A recent report from the women’s ward of Tabriz Prison has revealed horrible conditions in which female inmates are detained in this prison.

The women’s ward of the Central Prison of Tabriz was transferred to a new place on April 3, 2021.

The new ward has two floors. The lower floor houses the office of care takers, the head of the ward, the kitchen, and the praying room. A small room is also located at the end of a big hall for prisoners who have small children and will be turned into a workshop.

The upper floor is a small hall divided into four relatively big rooms and a small courtyard.

The first room is for deliberate crimes (murder); the second room is for drug-related convicts, the third room for quarantine, and the fourth for inmates convicted of financial or other public crimes.

There are 57 inmates in one room and 60 in another room. 68 drug-related convicts are detained in one room. The quarantine room is also crowded.

The limited space in the ward and lack of sufficient resources and facilities cause frequent fights among inmates.

Every room has two restrooms and two baths. Since there is no place for dishwashing, one of the baths is used for doing the dishes.

There is only one refrigerator in every room for some 60 inmates. To fill their water flasks, they have to walk down many steps to get water from the kitchen. They also have to bring their food from the first floor.

In the old ward, there used to be 15 beds and 15 persons in each room. Any extra person slept on the floor.

The hall in the new ward is not carpeted. Since the rooms are adjacent, any movement in the hall makes a lot of noise bothering the inmates. Prisoners say the sound of others walking in the hall is like banging a hammer on their heads.

So, although there are more beds, 3-tier bunk beds, in the new ward but because of the noise, inmates cannot go to sleep and get headaches.

For so many inmates, there is only one small TV installed in a big hall which is usually off.

The six phones sets in this ward are installed close to each other so prisoners have to stick together when they want to make a call. They are not relaxed while speaking on the phone. Their time for making calls is only 10 minutes. If their call takes longer, their telephone cards are confiscated, depriving them of calling their families for three days.

Eighty percent of the fights that break out among inmates are over using the phone.

The conditions in the new women’s ward of Tabriz Prison are very distressing. The ward was still under construction when the inmates were moved to the new place.

The rooms have no windows, except for a small window which is located high above, just below the ceiling and inmates cannot open it. So, they cannot let fresh air in the ward. Since prison guards close the door of the corridor, there is no air to breath.

For head count, every night, they pack all the prisoners in their rooms and close the doors, with the lights on. So, the inmates cannot rest until morning because they cannot breathe.

Inmates are worried when new arrivals are admitted. Legally, new arrivals must be quarantined and detained separately from other inmates. But the quarantine room does not really isolate the new arrivals, because they use the same hall, the same telephones and the same place for taking fresh air.

There is a small room in the lower floor of the women’s ward of Tabriz Prison which is supposed to serve as a clinic for women. But they only provide tranquilizers, sedatives and sleeping pills. The pills are given out at fixed hours during day and night. So, if an inmate feels pain in other times, they have to wait until the time comes.

The clinic staff gives only cold medicine and tranquilizers to the inmates who become sick. Many prisoners have submitted requests to go to the doctor at their own expense, but their requests have gone unnoticed by prison authorities.