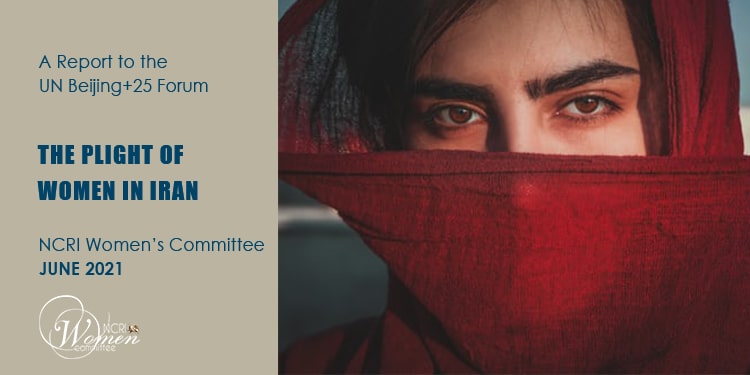 The Plight of Women in Iran – A Report to the UN Beijing+25 Forum is an NCRI Women’s Committee study of the clerical regime’s treatment of Iranian women in the past six years.

The UN last held its forum on the implementation of the Beijing Platform in 2015.

Our new study covers the period following this forum and is updated for the June 2021 #GenerationEquality Forum in Paris.

Responding to the questions asked by the UN Women on the status of women in every country, the NCRI Women’s Committee has shed light on the overall situation of women in Iran.

Contrary to the 2030 parity goals for #GenerationEquality, Iranian women are deprived of more and more of their rights by the country’s clerical regime.

Iran’s clerical regime is inherently a misogynistic regime that lacks the slightest intention to eliminate discrimination against women or promote their rights.

If one day they give up this patriarchy and provide an opportunity for women’s participation, they would not maintain their political system. Instead, they advance their goals by restricting and suppressing women’s rights under the banner of Islam.

Discrimination against women is entrenched in the law and the Constitution.

The Iranian regime has refused to sign on the United Nations’ Sustainable Development Goals simply because the SDGs seek to promote gender equality.

Iran’s fall into the lowest group of the World Economic Forum’s gender gap index is due to the laws and structural restrictions imposed on Iranian women.

Four decades of domestic and foreign policies of the Iranian regime, along with corruption, inefficiency, and waste, have brought a wealthy country with vast human and natural resources to a point where three-quarters of its population lives in a miserable state of absolute poverty. Poverty has had a significant impact on the plight of women in Iran, making the face of poverty feminine.

So, this study is an effort to shed light on the plight of women in Iran and the conduct of the Iranian regime 26 years after Beijing.

We wish to convey the voice of Iranian women suffering under the mullahs’ tyrannical regime. But Iranian women have never relented their struggle to obtain their legitimate rights. On the contrary, they are at the forefront of the battle for Iran’s freedom and democracy. The time has come for the world to hear their voice and support their cause.