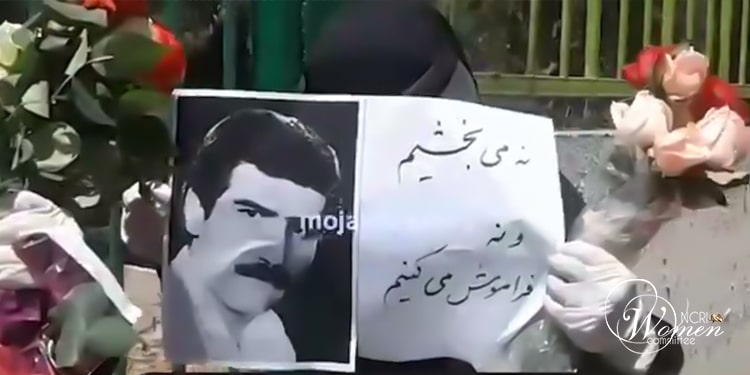 The families and mothers of the victims of the 1988 massacre gathered in Khavaran Cemetery on Thursday, May 13, 2021, to express their condemnation of the regime’s destruction of the site of the mass graves of their loved ones.

They chanted slogans including against Ebrahim Raisi, the head of the regime’s Judiciary, who is the regime’s presidential hopeful in the upcoming election charade, and was a member of the Death Committee during the 1988 massacre in Tehran.

The families and mothers of the victims of the 1988 massacre carried pictures of their loved ones and laid flowers on the unmarked graves in Khavaran.

They also held up signs which read: “Khavaran, the enduring document of crime against humanity in Iran, the 1988 massacre” and “until the prosecution of, and accountability for the criminals, we will neither forgive, nor forget.”

The Iranian clerical regime has been trying for decades to eliminate the evidence of its crime against humanity in 1988 when it massacred at least 30,000 political prisoners. Destroying the graves of the victims is one of the clerical regime’s well-known practices.

The regime has bulldozed the Khavaran Cemetery several times in the past decades. In its latest effort, the Iranian regime has been pressuring Baha’i families to bury their loved ones in Khavaran through preventing them to use the empty plots in their own cemetery near Tehran.

The families who visited Khavaran on April 23, 2021, reported that they saw eight freshly dug empty graves and two new graves marked by a sign indicating the name of the deceased. The families also reported an increased presence of security and intelligence forces over the past months.

According to Amnesty International, the lines drawn in the dirt mark future graves as well.

Prior to this in 2017, the graves of martyrs in Behesht-e Reza Cemetery in Mashhad and Vadi-e Rahmat in Tabriz were destroyed. In late July 2018, the regime destroyed the graves of the victims of the 1988 massacre in Ahvaz under the pretext of building a boulevard.

The National Council of Resistance of Iran (NCRI) condemned the clerical regime’s inhuman act of demolishing the graves of the martyrs and destroying evidence of crimes. The NCRI’s President-elect Mrs. Maryam Rajavi urged the UN officials and bodies to take immediate measures to prevent the continued destruction of the graves of the martyrs of the 1988 massacre, as well as to prevent pressure and coercion against the Baha’is.

She also urged the UN Security Council and all UN member states to formally condemn Khomeini’s fatwa for the 1988 massacre of political prisoners as genocide and a crime against humanity.

1,112 members of the families of the PMOI/MEK martyrs called for urgent action in a letter on May 4, 2021, to the UN Secretary-General, EU leaders, and the United States. They urged the world leaders to prevent further destruction of their relatives’ graves by the Iranian regime.

Censure by experts and Amnesty International

Also, 152 former UN officials and internationally renowned legal experts wrote a letter to the UN High Commissioner for Human Rights, Michelle Bachelet, calling for the establishment of an international commission of inquiry into the 1988 massacre of thousands of political prisoners in Iran. The UN Special Rapporteurs described the massacre in summer 1988 in Iran as a crime against humanity in September 2020.

“More than 33 years on, these crimes against humanity remain an open wound in Iran amid a crisis of systematic impunity. Those against whom there is evidence of direct involvement with these crimes continue to hold top positions of power. They include the current head of the judiciary and minister of justice, whose roles are vital for the pursuit of justice,” said Diana Eltahawy, Amnesty International’s Deputy Director for the Middle East and North Africa, in a statement on April 29, 2021.