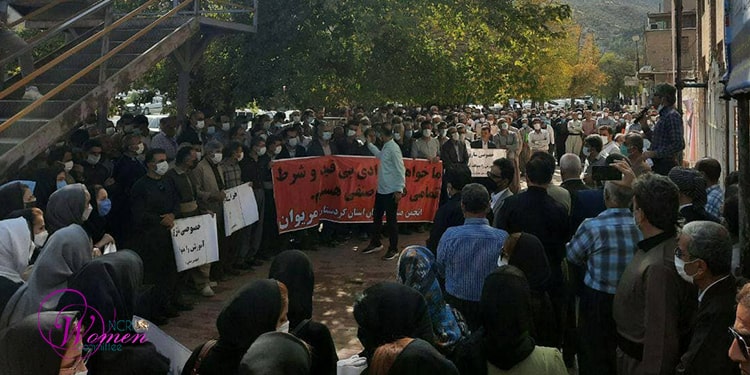 Iranian teachers hold protests across the country. They once again rose up in protest in Tehran and 44 other cities in 25 provinces, on Thursday, October 14, 2021. Female teachers widely participated in these protests.

Teachers protested against their unbearable living conditions and the officials’ failure to address their legitimate demands.

In Tehran, the protesters held a large placard that read, “Teachers are vigilant and hate discrimination.”

No surrender, no compromise, our ranking must be realized;

We will not relent until we obtain our rights;

(The regime’s) astronomical plunder (has made) the public destitute;

Implement the Ranking Plan without cheating;

Laid-off teachers must be reinstated in their jobs.

The teachers’ protest in Tehran took place outside the Planning and Budget Organization. In other cities, Iranian teachers gathered outside the Department of Education despite the clerical regime’s repressive measures. Plainclothes interfered in many cities and tried to prevent the protesting teachers from taking films or photos.

The State Security forces (SSF) attacked the teachers who had gathered in front of the state radio and television building and dispersed them.

In Kerman, the SSF made dozens of arrests to prevent the gathering, but teachers stood firm and continued their protest gathering.

Iranian teachers are deeply aware that the only way to achieve their legitimate rights is rising up to protest and overthrow the clerical dictatorship.