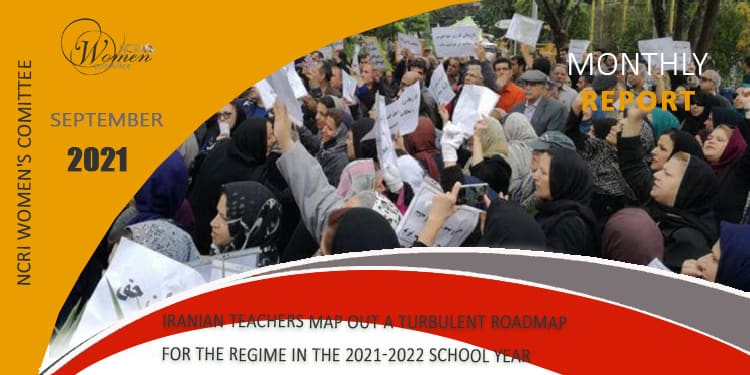 Teachers’ protests took up a new height in September. The coordinated and nationwide demonstrations spread to 40 cities and 20 provinces by September 25 when the schools reopened in Iran.

Thousands of teachers cried out their demands against Iran’s oppressive rulers on most days throughout September. Women played an effective and decisive role in all those protests. Female teachers actively participated in at least 113 acts of protest during September. The protests included:

The nationwide protests reacting to the Iranian teachers’ difficult living conditions under the clerical regime that have been going on for years, culminated in the suicides of a few teachers in recent months.

A teacher self-immolated in Isfahan in July due to financial straits. On September 16, 2021, a math teacher committed suicide in Fars province because of being unable to make an advance deposit of 5 million Tomans to receive a 50 million Toman loan.

Iranian teachers’ nationwide protests have mapped out a turbulent new school year for the clerical regime. And the regime will have to expect more united, coordinated, and widespread protests by teachers.

“Free all imprisoned teachers” was one of the demands in the Iranian teacher’s nationwide protests.

Dozens of teachers are behind bars, including women. Nahid Fat’halian, Zeinab Hamrang, Zahra Mohammadi are among the teachers presently incarcerated for their activism. The former two contracted the Covid-19 in Evin Prison.

What is the Teachers’ Ranking Plan?

Implementing the Teachers’ Ranking Plan was the most crucial demand of teachers during their protests in September. But what is this plan?

The ranking plan classifies teachers into five ranks based on their work experience, expertise, and competence. It applies to teachers with at least 21 years of work experience. Teachers get promoted one rank every five years. Those working in deprived, border, and nomadic regions earn a rank every four years.

The Teachers’ Ranking Plan was first proposed in 2004. The government has been obliged to implement the plan since March 2011, but it has not yet done so. (The state-run Eghtesadonline.com – September 29, 2021)

The Parliamentary Education Committee has already adopted the bill, and the government has been obliged to draft the executive regulations of the ranking regime in the shortest possible time. (The state-run Tasnim news agency – May 17, 2021)

Why does the regime not fulfill its promises to teachers?

The Iranian economy is bankrupt. The government faces a budget shortfall and will face even higher inflation by the end of the year. In such circumstances, it cannot allocate funds for vital and valuable issues, such as education, health, natural resources, the environment, etc. The government therefore lacks the budget to implement the Teachers’ Ranking Plan.

“The financial resources for implementing the Teachers’ Ranking Plan must be defined in the 2022 budget,” said Asghar Salimi, a member of the parliamentary Economic Commission.

Salimi added, “Presently, the main obstacle for teachers’ ranking is the lack of sufficient funding and credit to implement it. The Guardian Council rejects plans that do not have specific funding sources.” (The state-run Eghtesadonline.com, citing ISNA news agency – September 4, 2021)

The vice-chair of the parliamentary Education Committee, Mehdi Esmaili, also had this about the Teachers’ Ranking Plan: “(The plan’s implementation) needs a budget of 30,000 to 40,000 billion (Tomans) (approx. $1.07billion to $1.42billion). The only problem is funding. The government has announced 15,000 billion Tomans ($533 million) for the implementation of this plan. Still, this amount is not sufficient in any way.” (The state-run Eghtesadonline.com – September 18, 2021)

In comparison, the regime spends the lion’s share of its budget on nuclear weapons development, illegal circumvention of sanctions, and funding of terrorist groups abroad, including the Hezbollah in Lebanon and the war in Syria. Add to this the embezzlements and grand thefts of the regime officials.

Therefore, the clerical regime does not have any intention to implement the Teachers’ Ranking Plan. Raisi’s government shifted the implementation deadline to the last week of August. Still, it has not implemented it despite Iranian teachers’ nationwide protests. Instead of meeting the teachers’ demands, the clerical regime wants to keep them poor and engaged in their livelihood issues to prevent them from coming out to the streets.

Teachers’ salaries are several steps below the poverty line

Teachers educate future generations. For this reason, a teacher should have no concerns other than educating students. But in Iran, teachers’ salaries do not meet their living expenses, especially considering the current inflation.

According to the latest available statistics, the Ministry of Education is the largest in Iran, with 1,013,655 teachers and administrative staff.

Private intermediary companies hire teachers on unofficial, temporary contracts. Unofficial teachers have different names, but all of them are exploited by the regime. Their salaries are way below the minimum wage set by the Labor Ministry. At the same time, they do not receive any benefit, insurance, overtime fee, etc., for long hours of hard work.

Casual teachers, teachers selling their services, and outsourcing teachers are the principal unofficial teachers in Iran. Along with retired teachers and conscript soldiers, unofficial teachers teach the classes in public schools. They compensate for a large part of the Education Ministry’s workforce shortage but are never officially employed.

The Education Ministry has no obligation to employ casual teachers who receive much lower salaries and benefits than official teachers. Casual teachers’ salaries in public schools are meager. Depending on their education degree, from high school diploma to Ph.D., casual teachers receive between 18,000 Tomans and 23,000 Tomans per hour (64 to 80 cents). For example, suppose a teacher has 10 hours of teaching in a month. In that case, she will receive between 180,000 ($6.4) and 230,000 Tomans ($8), which the company usually pays with a delay of several months.

99% of teachers live under the poverty line

The National Statistics Center announced that the annual inflation reached 43% in June 2021. (The state-run Shahraranews.ir – June 26, 2021)

Ghaffar Jalali, a math teacher, told Etemadonline, “Other than top officials, 99% of our colleagues are living under the poverty line.” (The state-run salamatnews.com – September 28, 2021)

Of course, the purchase of detergents, healthcare, clothing, transportation, water, electricity, and gas costs is not considered when calculating the food basket cost. How could a teacher, especially a woman head of household, support their children with such low monthly salaries?

The Ministry of Education faces a shortage of 197,000 workforces. (The state-run Eghtesadonline.com – September 25, 2021)

Earlier, Hamid Reza Haji Babaii, the head of the teachers’ faction in the parliament, had announced the shortage of workforce is 300,000. (The state-run Tasnim news agency – August 15, 2021)

Despite the shortage, the Education Ministry refuses to officially employ the temporary teachers.

One of the most obvious examples of teachers who remain unemployed is the teachers with Green Report Cards. They passed the Education Ministry’s employment exam last year but have not been employed by the ministry to this date. They held a 20-day protest gathering and sit-in outside the ministry’s building in Tehran.

“Every once in a while, people gather outside the Ministry of Education, hold placards, and chant slogans,” wrote the state-run Didarnews.ir. “One day the outsourcing teachers, the next day the teachers who sell their services. One day the casual teachers, and another day the student teachers. And the most recent of these rallies belonged to the teachers with Green Report cards that resumed in September. In their round-the-clock sit-ins, the Green Report Card teachers had only one demand from the Education Ministry: official employment!” (The state-run Didarnews.ir – September 8, 2021)

The regime does not want to pay the teachers’ full salaries and insurance by employing them officially. Like workers and nurses, teachers are forced to work through third-party contractor companies that operate without any supervision in such a system. Teachers working on temporary contracts do not receive the Education Ministry’s benefits for officially employed teachers.

The situation is worse in smaller cities. The average monthly salary of teachers in non-public schools is around 600,000 to 800,000 Tomans ($21-$28). This small amount is only for the school year and does not cover all 12 months of the year.

The state media describe the exploitation of teachers, with 20 years of experience, as “new slavery.”

Many of these contracts deprive teachers of the right to file complaints. These teachers, primarily women, are forced to sign the contract to earn a small piece of bread. They lose their jobs with any incident such as pregnancy, illness, or protesting low salaries. (The state-run ROKNA news agency – July 12, 2021)

“We teach in schools. Our selection has been formal and permanent. After all, we are in the Education Ministry’s system, but they do not recognize us. They say that because we work in private schools, we cannot claim to be officially employed,” said one female teacher. (The state-run Fars news agency – July 3, 2021)

Another female teacher said: “Since last May (2020), teachers have joined from across the country and held large gatherings outside the parliament to demand official employment. However, MPs say that because you work in private schools, you cannot demand to be officially employed. With eight years of experience and 25 hours of teaching per week, my salary is 1,375,000 Tomans ($49). I do not receive any insurance. Now, an official teacher in elementary school with the same work hours receives a monthly salary of at least 4 million Tomans ($142).” (The state-run Fars news agency – July 3, 2021)

Crises are neither resolved nor ended

Part of the problems and crises in education is related to the rights of teachers. To these problems, we must add the tsunami of retirees and the ranking of teachers, students left out of school, private school teachers, shortage of workforce for the exceptional students, and so on.

Under the medieval rule of the mullahs’ regime, “crises are neither resolved nor ended. We just move from one crisis to the next,” wrote the state-run Didarnews.ir on September 8, 2021.