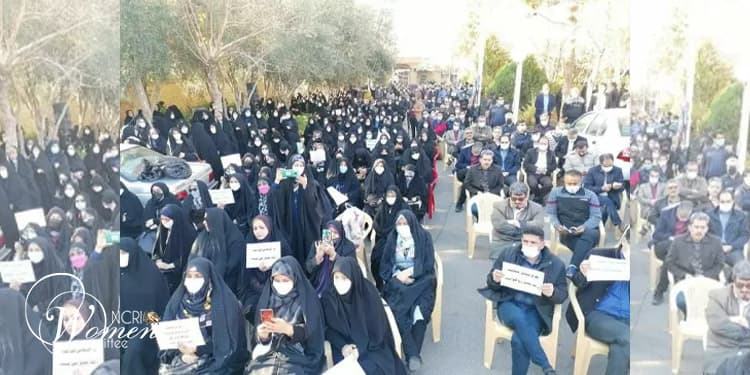 Iranian teachers continued their protests for the second day on Sunday, December 12, 2021, in more than 70 cities.

Their sit-ins and protests are over Iranian teachers’ abysmal living conditions and low wages. The teachers called for the release of imprisoned teachers and educators. They renewed their call to continue the protests on Monday, December 13.

Teachers held protest rallies in Qom and Fasa (Fars Province). Women’s presence was prominent in the rally in Qom, where the teachers sang the O’Iran anthem.

The teachers held placards, which read, “Free education is the right of all students,” “Prison is not a place for teachers,” “Free the imprisoned teachers,” “Strikes, rallies, and unions are our inalienable rights,” “Ranking is our inalienable right,” “teachers are vigilant, and despise discrimination,” and “Teachers object to discrimination, injustice, and poverty.”

The adoption and full implementation of the teachers’ ranking bill

Balancing the salaries of all jobs based on a fair system, particularly the retirees’ pensions

Complete and precise execution of Principle 30 of the Constitution on free education.

In September, Iranian teachers geared up their nationwide protests to obtain their legitimate demands for decent salaries and living conditions. Most teachers have very difficult livings with wages that are one-fourth or one-third of the poverty line.